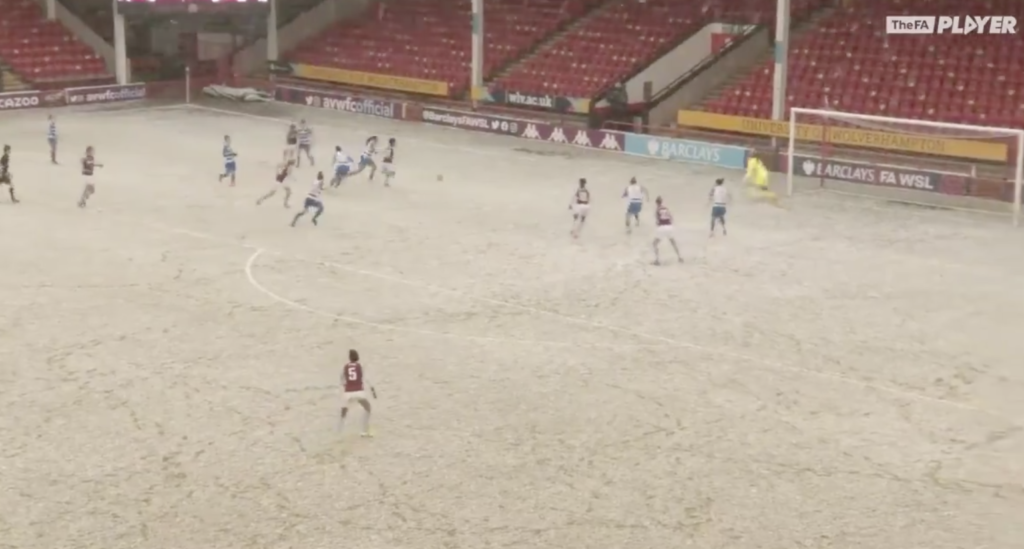 There were just three games this weekend in the FA Women’s Super League, as a heavy helping of snow in England caused three match postponements.

With their win, Manchester United leapfrogged Chelsea to take back the lead in the WSL table – although Chelsea now have two games in hand on United. Manchester City’s easy win over Brighton & Hove Albion kept them in the top three and the hunt for a Champions League berth, while newcomer Mana Iwabuchi helped Aston Villa on to an important point against Reading. Read on for all of the league news!

A great defensive performance from Birmingham City kept things level through 45 minutes on Sunday. But it was outdone just moments into the second half, when Manchester United’s Leah Galton beat two Birmingham defenders at the back post and finished a cross sent in by Lauren James.

Ella Toone doubled United’s lead late in the second half, when she found space in the 18 and fired a shot that hit the far post and went in.

Christen Press was available on the bench but did not feature. After the match, United head coach Casey Stoney provided an update on Tobin Heath, who is injured and was not available.

Casey Stoney on Tobin Heath: “She’s going to be out for a while now.” #MUFC

Houghton’s beautiful free kick goal in the 41st minute was a nice way to mark her 150th appearance in the league. The England and City captain is the first player to ever reach this milestone.

Now that's some way to celebrate your 150th #BarclaysFAWSL appearance!

In her first Aston Villa start, Mana Iwabuchi became just the second Japanese player ever to score a goal in the FA WSL (after Yūki Nagasato).

Saturday’s match featured a great midfield battle between Villa’s Iwabuchi and Reading’s Jess Fishlock, and goals were traded back and forth as the snow came down. Angharad James opened the scoring for Reading in the 3rd minute, and Iwabuchi equalized in the 55th. Rachel Rowe took back the lead for Reading shortly after, and Reading looked like they were headed for victory.

But in injury time, Villa forward Diana Silva got her foot on a pass from Iwabuchi, helping Villa on to the draw and a big point. They are now five points clear of Bristol City and the relegation zone.

At the death! @dmasilva19 stabs home a late leveller in the snow to earn @AVWFCOfficial a point! ❄️@buchi_mana with the assist 👏 pic.twitter.com/Cj1kGyuVG1

After a big performance against Arsenal last weekend, Reading will be disappointed with giving away the lead twice on Saturday.

Postponed due to a waterlogged pitch.

Postponed due to extreme weather.

Postponed due to extreme weather.

Chelsea did get to play last Wednesday, as they came from behind to defeat Manchester City in the Continental League Cup quarterfinals. Goals from Guro Reiten and Sophie Ingle (the screamer below) in extra-time completed the 4-2 comeback.

No game for us today = a perfect excuse to show @SophieIngle01's screamer from Wednesday night again! 🤩👏 pic.twitter.com/rGzdSC3U27

Postponed due to extreme weather. That’s two in one week for Everton!