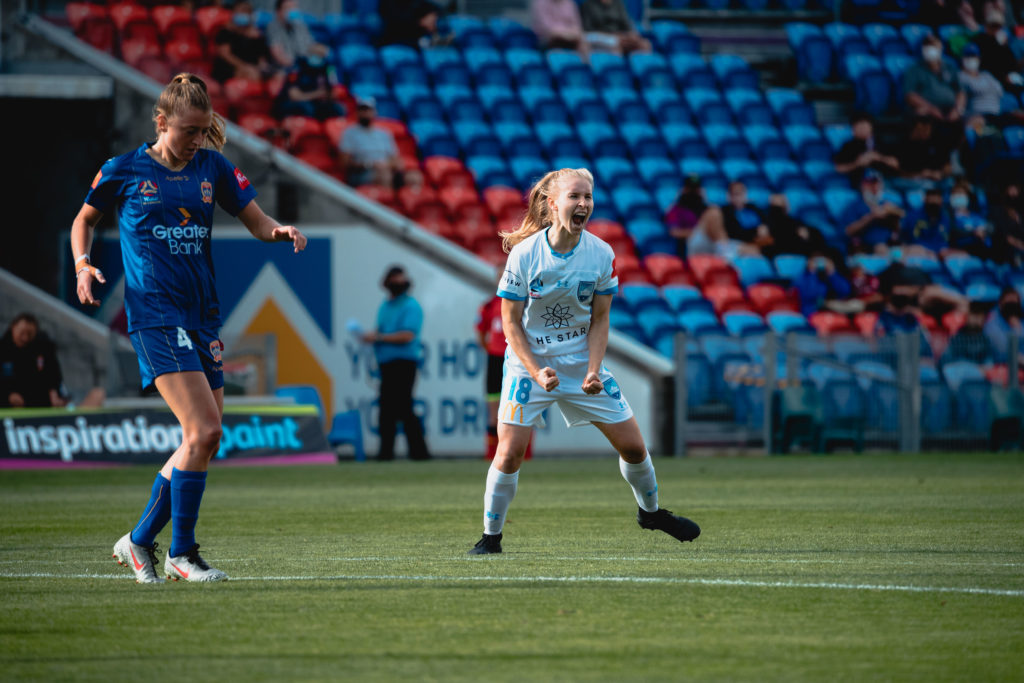 You’re not seeing double. This week, another Melbourne City Derby took place in Australia in W-League action. This time, Melbourne City bounced back from their whopping defeat by the Victory last week, and claimed victory.

Sydney FC completed the double against derby rivals Western Sydney on Jan. 16 with a 2-0 victory in front of a crowd of 2,500 at Stadium Australia, as part of an A-League/W-League doubleheader in the harbor city. Mackenzie Hawkesby scored the opener in the 31st minute from the penalty spot after Princess Ibini was taken down as she dribbled into the box from the left wing. Hawkesby’s successful effort was her first W-League goal in her second season with the Sky Blues.

Former Houston Dash and W-League veteran Ellie Brush scored the second goal in the 66th minute when she was perfectly positioned near the far post to pounce on a rebound off the crossbar from Sydney FC Captain Teresa Polias’s corner kick.

Brush, who was capped twice by the full national team about a decade ago, scored her 20th goal in 130 W-League games across 12 seasons, mostly with Canberra before moving to Sydney in 2017 so she could play in the Australian Football League (Aussie Rules) with the Greater Sydney Giants. Combined with their 3-0 derby win in Round 1, Sydney FC is now 15-2-1 (W-L-T) all-time against the Wanderers.

Don't give @Brushy7 a chance to pounce 👀

What a difference six days makes. After Melbourne City’s utter collapse in a 6-0 defeat in the derby in Round 3, due to scheduling shuffling as a result of COVID-19 state protocols, the teams met in the return in their next game (as with the Adelaide-Perth games) with the Champions edging Victory, 3-2 in a stirring match. Australia international Alex Chidiac and an own goal from New Zealand international Claudia Bunge — after City’s Japanese international Chinatsu Kira put in a hard cross from the right touchline — gave City a 2-0 advantage by the 25th minute mark.

The Victory fought back with goals by Australian U-20 international Mindy Barbieri and American import Catherine Zimmerman (her second in two games) to tie the game within six minutes after the restart. City regained the lead through 25-year-old W-League rookie Harriet Withers’ 86th-minute strike for her first ever league goal, with Chidiac providing the assist.

Withers said after the game, “From last week we had a lot to prove… We knew we had to come and fight really hard and that’s what we did so I’m incredibly proud.”

Withers played collegiately at Murray State University from the Ohio Valley Conference in Murray, Kentucky, from 2015-2018 and then was an assistant coach for one season in 2018 at Bard College in New York State. She played for Souths United in the Queensland NPL in 2020 ahead of the 2020/21 W-League season, scoring 12 goals for the seventh place side in the 11 team state league.

City won its first game of the season and pulled even with Victory on 4 points, though the Victory have played only three games to City’s four and have a far superior goal differential (plus-5 to minus-6). Chidiac, returning to the W-League after parts of three seasons at Atletico Madrid in Spain — where injuries and squad competition blunted her progress — was a key force in the match which her passing and dangerous runs.

On Jan. 14, Adelaide United came away from their long trip to Western Australia with a 2-1 victory over the Perth Glory in front of 673 fans. Adelaide’s English import Fiona Worts scored in the 6th minute from a brilliant lead ball on the ground from American import Mallory Weber (on loan from Kansas City). The lead held up until Caitlin Doeglas tied up the contest for Perth in the 53rd minute, which was her sixth goal in 39 matches across six seasons, all for the Glory.

Emily Condon scored her second goal of the season on a header near the goal line from Weber’s cross to the far post in the 74th minute to secure the three points. The two teams met just five days earlier in Round 3 with Adelaide winning 1-0 andCondon again scoring the winner. Condon, 22, now has 10 goals in 63 W-League games in her seventh season, all with the Reds.

Condon had a 90% passing efficiency from 31 passes and supplied 13 crosses, far more than any other player on either side, as well as winning five of eight duels.

New Zealand import and ex-Louisiana State University goalkeeper Lily Alfeld was brilliant in goal for Perth for the second consecutive game. Alfeld’s standout save of the game came just a minute before Adelaide’s winning goal as she made a one-handed stop from a dangerous Georgia Campagnale drive with 15 minutes left. She finished with six saves from eight Adelaide shot attempts.

Adelaide United is now in the top four on the league table in their quest for a first ever W-League playoff berth in their 13th league season.

A late change in the schedule pitted the Jets at home versus Brisbane Roar on Jan. 17 after the original opponent, Canberra, was replaced due to COVID-19 health protocols in different Australian states, which has caused considerable changes in the first month of the W-League season as the league tries to balance its schedule as best it can.

Newcastle tied visiting Brisbane Roar, 1-1 in front of 1,371 fans to take their first point of the season and move them off the bottom of the table into eighth, ahead of Perth Glory. Tara Andrews scored her third goal of the season (the only Jet to have scored this season) in the 16th minute while Emily Gielnik scored in the 54th minute to give the Roar a share of the points and they remain undefeated with four draws in their four matches this season.

Brisbane keeper Georgina Worth made a tremendous save in the 90th-minute from a point-blank shot by first year player Sophie Harding to preserve the tie.

The Roar, as they typically do, led in possession (58% vs. 42) over Newcastle, but the Jets had 20 shots to 19 for the Roar and were even on shots on goal. Australian youth international Sunny Franco, who played with the Roar for three of her past five W-League seasons, led all players in the game with eight shots, including hitting the post in the seventh minute on a stellar shot that that saw Worth rooted to the spot.

Aren't you meant to cool down after the game? 😅

Ellie Brush had a fine game in central defense and was second on her side in passing efficiency with 78% from 49 passes and she chipped in four shots on goal — all in the penalty box. She also helped to lock down the Sydney defense, which has allowed a league low of one goal in three games, by winning eight of nine duels and recording two clearances, two interceptions and two fouls won.

She is being talked about in the pre-Olympic Games discussion after a strong start to the season. Defense is still an area that the Matildas need to shore up and she was in a preseason identification camp for domestic players held by Matildas assistant coach and former Brisbane Roar head coach Mel Andreatta.

At 32, Brush was the oldest player among the 23 participants and the only one with full-team caps. Brush took this season off from the AFL to concentrate on the W-League season and it could result in a Matildas recall after many years. She would replicate the formula that central defender Jenna McCormick (Melbourne City) followed in taking a sabbatical from the two-time AFL champion Adelaide Crows after the 2019 season to concentrate on football, resulting in her first Matildas caps in 2019 and playing with the AFC Olympic Games Final Qualifying team.

Honorable mention this week goes to Alex Chidiac of Melbourne City, who had one goal and one assist in the 3-2 Melbourne City derby win over Melbourne Victory, which was some redemption after the 6-0 shellacking they received last week from the Victory. Chidiac was crucial in her side’s first win of the season in four games; more dropped points could have set off alarm bells with the four-time W-League Champions.

.@SydneyFC move 🔝 of the Westfield #WLeague ladder at the end of Round 4, presented by Bunnings 🔢 pic.twitter.com/fGlN0bkJxr