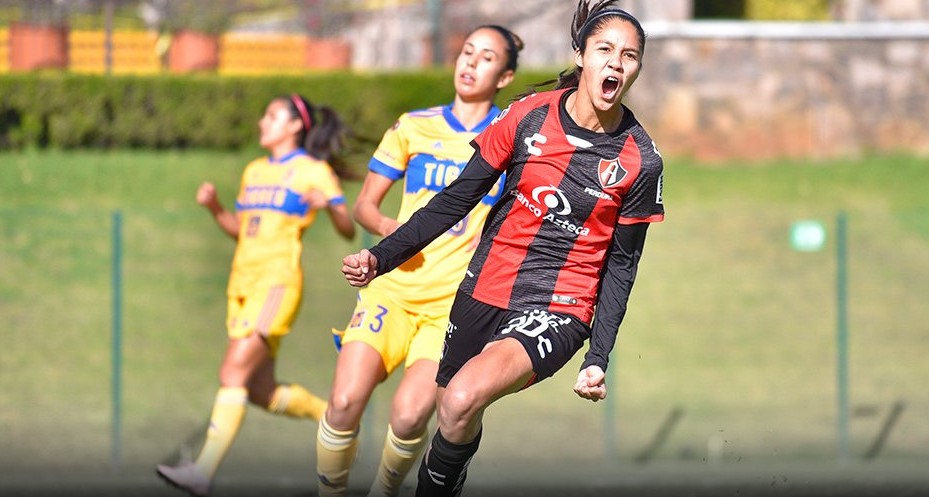 The Clausura is still in the beginning stages in Liga MX Femenil competition. However, it’s never too early for an upset. Atlas was the team that provided the major upset this weekend in Mexico with a 2-1 victory over Tigres.

Tigres are the reigning champions of Mexico, taking home the Apertura title in December.

We recap all the action in Mexico from the second week of Clausura competition.

Alison González is on a tear for Atlas. In Week 1 of the Clausura, González scored both goals in the club’s upset victory over Club América. Mark this as the second week in a row for an Atlas upset — along with another brace for González.

Scoring in the 9th and 51st minutes, González has Atlas on her back right now. Katty Martínez of Tigres attempted to gain some momentum back, but Atlas held off the remaining Tigres attacks. González’s first goal came off an unlucky Tigres deflection right to her. Running full speed with defender Bianca Sierra on her tail, González slotted the ball, at an angle, past Tigres goalkeeper Ofelia Solis. Her second goal was a chip over Solis inside the box.

Atlas isn’t at the top of the table due to goal differential, but remains a surprising story in Liga MX Femenil early in the new season. Atlas has wasted no time in letting González run and score goals, and it’s paying off.

Cruz Azul and Club León entered the second week of competition coming off of losses. Avoiding another week with no points earned, both sides split the points and now have one each on the Clausura table. Toward the end of the first half, Karime Abud scored for Cruz Azul on a a dribble-up to the goalkeeper. She out-paced her defender and created space to get the pass from Alejandra Tapia.

However, Daniela Calderon refused to send León home empty-handed. In the 88th minute, the forward found space in the box and headed in a perfectly placed ball from Lucero Cuevas.

Goals weren’t scarce in Mexico on Friday night in Santiago de Querétaro. After falling last week, Querétaro hosted San Luis and notched all three points with goals from three different scorers. Lizette Rodriguez’s goal came off a header inside the box, right at the beginning of the second half. Meanwhile, Maritza Maldonado snuck past her defender and comfortably put the ball away, and Daniela Sánchez notched the game-winner after dribbling through five different defenders — and no, that’s not an exaggeration.

San Luis didn’t go down without a fight, though. Isabel Kasis scored the first goal of the match. After Rodriguez equalized for Querétaro, Estefania Izaguirre re-took the lead after intercepting goalkeeper Dayri Hernández and capitalizing off the mistake.

At home, Mazatlán couldn’t quite hold off powerhouse Chivas. Despite scoring the first goal — courtesy of Cassandra Montero’s shot minute from distance in the 20th — Mazatlán gave up the points due to two Chivas goals.

Alicia Cervantes tied the match in the 40th minute, giving Chivas a boost before halftime. With a lucky bounce toward her inside the box, Cervantes smashed the ball past goalkeeper Mariana Zárraga. In the second half, Christian Jaramillo scored the first penalty kick of the weekend — as there were three penalty kicks last weekend converted.

Chivas now have a two-game winning streak heading into a tough contest against Santos Laguna.

Last week, Puebla was watching the rest of the league compete without them (and without Santos Laguna). Positive COVID-19 tests from the Santos camp postponed the match until February. In their “first week” of action, Puebla welcomed Pumas to their stadium. However, Pumas came to crash the party and took home three points in a 3-0 victory.

Daniela Garcia got Pumas off to a hot start, scoring at the top of the penalty area in the 10th minute. Not too far after, Paola Chavero scored in the 21st minute, sandwiched in-between two defenders and initially steadying the bouncing ball with her head so she could get a shot off her feet.

Adding an insurance goal, Laura Herrera created space for herself and found herself wide open. She dribbled the ball into the box in the 91st minute and scored on goalkeeper Brissa Rangel.

After a shocking start to their Clausura which saw them lose to Atlas, Club América bounced back in Week 2 with a win over Juárez. They got some help from their opponents, too, namely Gabriela Rocío Álvarez, who scored an own goal in the 24th minute to give América the lead.

The own goal came off a bad deflection inside the box, and for a moment Juárez goalkeeper Alondra Ubaldo remained down after colliding with her defender. Ubaldo was able to receive treatment and finish the match.

Atzimba Casas helped to atone for her teammates’ mistake, scoring outside the box in the 44th minute to equalize. However, as time dwindled down in the second half, Club América captured the much-needed win with Eva Gonzalez scoring in the 84th minute off a curling shot outside the box.

América will now look to steady the course next week, as they travel to face Mazatlán.

While the layoff from Week 1 hurt Puebla, the same couldn’t be said for Santos Laguna. Cleared to play, Santos Laguna traveled and picked up three points on the road. Cinthya Peraza kicked off the scoring in the 22nd minute, sending her free kick over a seven-person wall from Pachuca — and a three-person Santos wall — and past goalkeeper Esthefanny Barreras.

On a corner kick in the 51st minute, Alexxandra Ramírez wasn’t near any other player, but ran in from outside the penalty area and headed her shot in goal for Santos Laguna. In an attempt to stir up a last-minute comeback, Monica Alvarado almost replicated the same play, but slanted her run inside the penalty area. The goal was assisted by Sumiko Gutierrez, who perfectly synced up with Alvarado.

Another week of Clausura action, another five goals for Monterrey. The cushion helped Monterrey keep the top spot on the table, with a goal differential of plus-10. Only three clubs have not given up a goal yet in the Clausura: Monterrey, Pumas and Toluca.

Four different players scored for Monterrey against a struggling Necaxa side and goalkeeper Guadalupe Olvera. Three of the five goals were scored in the first half, with Monica Flores kicking it off in the 6th minute. Flores took a one-touch shot from distance. But, goalkeeper Olvera made the decision to punch the ball instead of catching it, and the punch deflected the ball into goal.

Monica Monsiváis scored five minutes later, picking up on a defensive miscommunication by Olvera and defender Brianda Escobedo. To close out first-half scoring, Aylin Aviléz, who is tied with Atlas’ González for most goals with four, scored in the 32nd minute off a chip. Once again, it took an unlucky Necaxa deflection into net.

In the second half, Christina Burkenroad wasted no time out of the gate getting past Necaxa, shooting and scoring inside the box. Aviléz tacked on another goal, giving her two matches in a row with two goals scored. Aviléz’ second goal, in the 88th minute, came off a corner kick and her header.

Monterrey takes on Querétaro this weekend. It might be harder to score five goals, but Monterrey is on a hot-streak right now. Don’t be surprised if they can run up the score once again.

Arlett Tovar continued a streak of scoring goals, just like a few of her Liga MX Femenil counterparts. Scoring once against Club León last week, Tovar scored the lone, and game-winning, goal against Club Tijuana, who are replicating the same slow start they faced in the Apertura.

Tovar’s goal in the 14th minute was a penalty kick aimed to the left, as goalkeeper Itzel Gonzalez dove right. Toluca now has two wins in a row, and hasn’t given up a goal in two weeks of Clausura action.

Santos Laguna is mourning after manager Martín Pérez Padrón passed away on Jan. 19. The club announced his passing, which was related to COVID-19, early in the morning. Pérez Padrón has been with Santos since 2018.

“Martin Perez, who was a great human being and an excellent colleague, followed all the corresponding protocols and treatments, however, in the end he was one more victim of this pandemic, which affects not only the country, but the whole world. We unite in prayer for his eternal rest and for the strength of his family to overcome this adversity,” a press release from Santos Laguna read.

Sitting at the bottom of the table, Necaxa made the decision to fire head coach Fabiola Vargas. In a release, the club said they will share who their interim coach will be in the “coming days.”

“We appreciate the commitment, dedication and effort shown by Fabiola Vargas during the time she was in charge of the team. We also wish you success in her future projects,” a team release stated.