Chelsea came out on top of an entertaining, end-to-end contest with Manchester United on Sunday afternoon, a result with implications on the FA Women’s Super League history books, not to mention this season’s title race. The reigning FAWSL champions won 2-1, with Pernille Harder and Fran Kirby’s goals bookending a fine equalizing strike from United substitute Lauren James.

The win extended Chelsea’s unbeaten run to 31 games, equaling a record set by Nick Cushing’s Manchester City in 2017. It also propelled the Blues to the top of the league table, moving ahead of Manchester United on goal difference with one game in hand still to play.

In what was arguably the most important FAWSL game of the season, Emma Hayes’ side once again found a way to take three points. Here, we’ll break down how the match was won and lost.

Manchester United started with intensity, utilizing a distinct pressing strategy. Usually from a 4-2-3-1 it’s the striker and attacking midfielder — in this case, Christen Press and Ella Toone — that put pressure on the opponent’s center backs, but here it was the wingers’ responsibility. United were without Tobin Heath due to injury, but in Kirsty Hanson and Leah Galton they had wide players with the pace and energy to rush Millie Bright and Magdalena Eriksson in these situations. 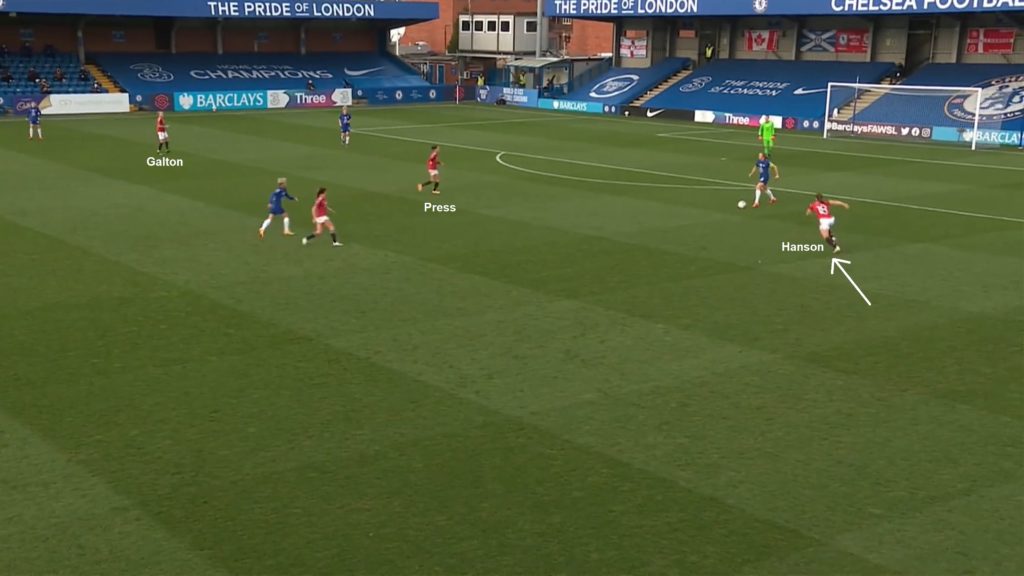 This approach wasn’t entirely dissimilar to the one used by the USA in their 2019 World Cup quarterfinal victory over France. In that match, Alex Morgan (circled in the graphic below) stayed closer to the French midfielders while Heath and Megan Rapinoe put pressure on the center backs. The strategy worked well, taking away France’s ability to play diagonals out wide to their high fullbacks. 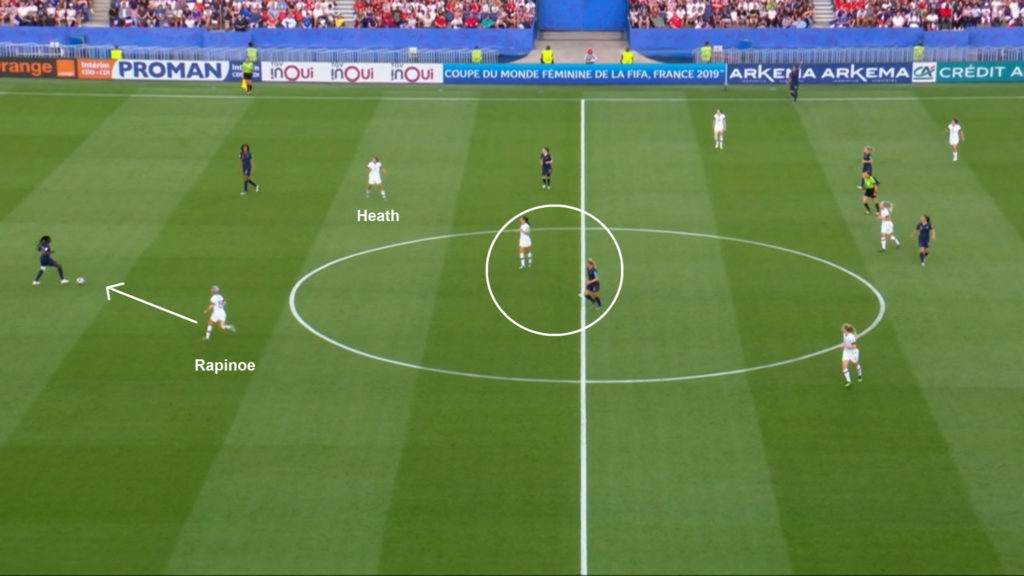 Back to Sunday’s game: Chelsea were troubled by this fast start. In the first 10 minutes they were forced into a couple of hurried long balls and giveaways, but eventually the champions found a way through the press. They did this either through an individual such as Eriksson out-playing the pressure, or through a routine.

The most common routine was a pass into central midfield, followed by a pass out to the fullback, who was left free when Manchester United’s wingers went to press. An example is seen in the following clip. Hanson pressures Eriksson, who passes to Melanie Leupolz. The German international then plays first time out to left-back Jonna Andersson, who is now free to receive and play forward.

Access the best women’s soccer coverage all year long
Start your FREE, 7-day trial of The Equalizer Extra for industry-leading reporting and insight on the USWNT, NWSL and beyond.
Subscribe
Existing Users Sign In Here
Related TopicsChelseaExtraFAWSLFeaturedFran KirbyManchester UnitedSam Kerr