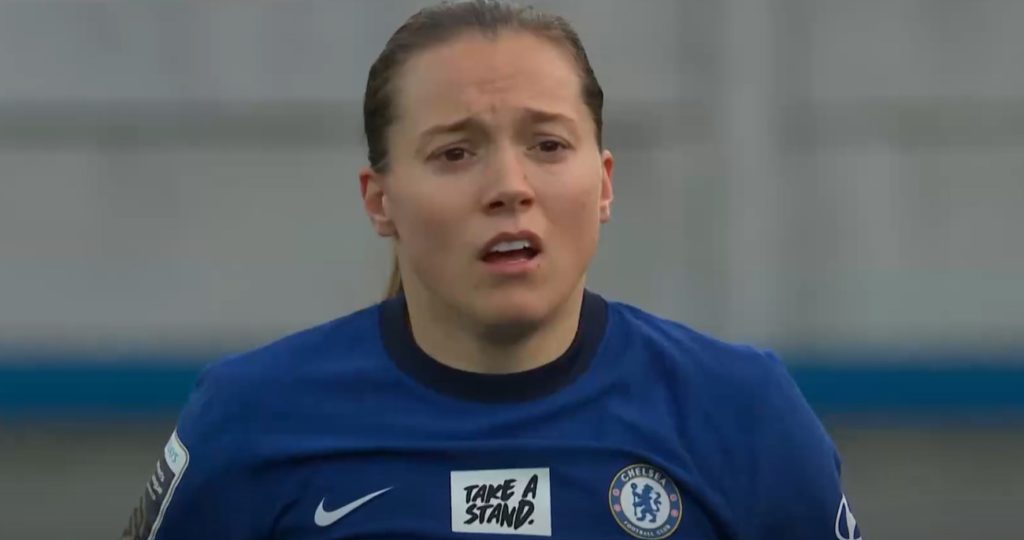 The FA Women’s Super League was back to a full day of matches on Sunday after last week’s slate of postponements.

Chelsea earned a huge win over Manchester United, putting them level on points with the Red Devils, with a game in hand, and atop the table with a superior goal difference. Meanwhile, Arsenal dropped points to Reading and looked dismal, casting more doubts on their chances in the title race. Read on for a full recap of the highlights and news around the league!

It's all in the goal difference at the top ⚽#BarclaysFAWSL pic.twitter.com/FWPr2sPhwO

Chelsea handed Manchester United their first loss of the season on Sunday, while the Blues remain unbeaten.

United were tested in the opening 20 minutes through a number of chances by Sam Kerr, but were able to weather the storm. Christen Press, starting her first game for United since November after being out with illness, had a chance of her own in the 27th minute that landed just wide of goal.

But Chelsea kept the pressure up, and broke through just minutes later. With a scramble in front of goal unfolding, United defenders were able to keep the ball out at first. But a rebound then landed at Pernille Harder’s feet, and she sent the ball into the back of the net for the opener.

United managed to save it off the line, but Pernille Harder made no mistake when the ball landed at her feet!pic.twitter.com/qDga9Y77eg

United managed to find their equalizer in the 61st minute, through a brilliant sequence from substitute Lauren James, who had just replaced Press.

Gorgeous build up and great finish by Lauren James! 😱
pic.twitter.com/vPiFoEjh5j

But just three minutes later, Fran Kirby took advantage of some lax defending by United’s back line. She sped past Millie Turner, ran onto Ann-Katrin Berger’s drop-kick, and tucked her finish past Mary Earps.

Chelsea are back in front! Costly mistake from United’s back line. pic.twitter.com/td0ROo54YZ

Tobin Heath did not feature in the match due to a knock, and was in sneakers on the sideline.

I’m told it’s touch and go with Tobin Heath due to a knock, that’s why she’s not warming up at the moment.

Chelsea have another tough test on Wednesday against Manchester City in the Continental League Cup quarterfinal.

Manchester City ran riot over Aston Villa on Sunday, scoring six goals in the first half alone. Villa seemed to regroup at the half and only allowed one more, but the damage was done after the first 45. They did that without several players, including U.S. internationals Sam Mewis and Rose Lavelle.

And on Saturday, City officially announced the signing of U.S. defender Abby Dahlkemper to a two-and-a-half-year contract. As reported by The Equalizer‘s Jeff Kassouf, the North Carolina Courage and U.S. Soccer offered Dahlkemper a comparable package to try to keep her in the NWSL, to no avail.

A well organized Reading side shocked Arsenal on Sunday when they opened the scoring in the first 15 minutes. Both former Arsenal players, Reading’s Emma Mitchell delivered a free kick that found Lauren Bruton, who volleyed it home.

Vivianne Miedema managed to equalize for Arsenal in the 4oth minute, but the Gunners lacked the creativity needed to get the ball to their star striker and create chances for large stretches of the match. It was also a curious starting XI from Arsenal manager Joe Montemurro, who chose a 3-2-2-3 formation and opted to leave regular starting center backs Jen Beattie and Leah Williamson on the bench to start.

The dropped points won’t help the growing displeasure amongst Arsenal fans regarding their recent performances (just take a look at the replies to the tweet below). Arsenal have earned just 8 points fromsix6 WSL games going back to the start of November.

In player news, Steph Catley underwent surgery this week after sustaining a hamstring injury before the holiday break.

On Sunday, Izzy Christiansen scored a brace and recorded an assist in Everton’s 4-0 win over Bristol City, who are currently being managed by Matt Beard. Beard, who left West Ham in November, will coach Bristol until the end of the season while manager Tanya Oxtoby is on maternity leave.

Everton’s Rikke Sevecke and Valérie Gauvin both returned from injury on Sunday as second half substitutes, a welcome sign for the club who currently sit in fifth place.

Tottenham earned their third win in a row under manager Rehanne Skinner on Sunday, courtesy of a first half goal by Lucy Quinn.

⚪️ Not a bad time for your first goal of the season! @LucyQuinn7 strikes for @SpursWomen in the London Derby…#BarclaysFAWSL pic.twitter.com/MmLjJsaSUk

Shelina Zadorsky, who recently inked a permanent transfer to Spurs from Orlando, captained her side.

West Ham have to regroup quickly, as they play Durham at home on Thursday in the Continental League Cup.

Amid an injury crisis, Birmingham City announced two signings on Saturday: England youth international Emily Murphy, on loan from Chelsea, and Irish international Ruesha Littlejohn. And both additions were in the starting XI on Sunday when Birmingham played to a scoreless draw against Brighton.

Five storylines which will define the rest of the FAWSL season