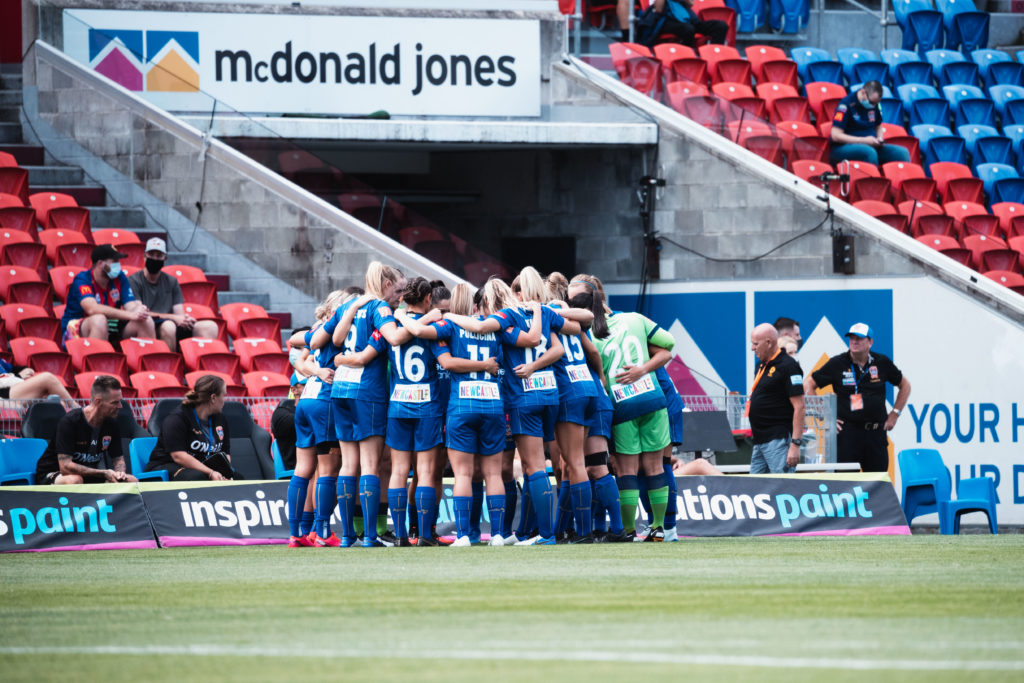 Melbourne Victory made a statement with a 6-0 victory over Melbourne FC, which was the largest margin of victory ever. Here’s how things played out this weekend in Australia in the W-League.

Brisbane Roar attracted a crowd of 1,079 at their new permanent home field at Dolphin Stadium in suburban Brisbane on January 7 for a 1-1 draw with Canberra United, which kept both teams unbeaten after three games. Katrina Gorry’s third minute shot from beyond the top of the box received a bit of a boost from a strong wind and gave the Roar their first goal of the season, after two scoreless ties in their previous games against the two Melbourne sides.

For Gorry, it was her 24th goal in 118 W-League matches. Canberra midfielder Grace Maher scored an incredible goal from inside the midfield circle in the 78th minute to ultimately give the Greens a share of the points. Maher’s shot caught Roar goalkeeper Georgina Worth off her line as she had been playing more of keeper/sweeper role in the previous 10-15 minutes as Brisbane controlled much of the ball possession with the wind against them.

Maher told Fox Sports after the game, “I love my long range shots, everyone knows that. I felt I had the wind and time, so look, if I hit it and it was hard enough, hopefully it would go in. I think right in the end the wind helped me a little bit to get over the line….That wind was a big factor, we faced it in the first half and we knew how hard it was to get out of that half.”

Maher now has 7 goals in 49 W-League games. Roar’s Isabel Dalton and Emily Gielnik both had efforts bounce away off the woodwork while Michelle Heyman did the same for United.

The Roar had the advantage in possession (57% vs. 43%), shots (22 vs. 13) and shots on goal (10 vs. 4). This match featured the two dominant sides in the W-League until the emergence of Melbourne City in 2014/15, who have won four Grand Finals and two Premiership Titles in the last 5 seasons); Brisbane and Canberra totaled four Grand Finals and four Premiership titles in the 7 W-League campaigns before Melbourne City’s launch.

Maher’s surprising initiative to take the long shot, along with Canberra’s two injury-time winners to start the season, show that you can’t take your eyes away from any United game for a second.

Canberra, after missing the playoffs the last three seasons, looks vibrant in attack and is off to a very strong 2020/21 campaign. Despite the three ties, the Roar remain favorites for a top four position at the end of the season based on the vast experience of Gorry, Gielnik, Clare Polkinghorne and Tameka Butt in the side, who are key to their strong possession game. They just need to convert more of their chances.

Gorry told Fox Sports after the game, “It’s just the final pass for us, we create so many chances and our back four are so solid, so we need to be better in the front third and start finishing our chances. It’s tough not getting a few goals and coming away with three points, but we know it will come; we’re performing well and creating chances, so hopefully it will come.”

Sydney FC used two second half goals to defeat Newcastle Jets 2-1 on the road in the New South Wales derby on Jan. 8, in front of 1,918 fans, the second best total this season after the Round 1 Sydney derby (3,027).

Tara Andrews gave the Jets a 1-0 lead in the 41st minute but Taylor Ray (48’) and Rachel Lowe (75’) strikes after the break provided Sydney the three points as they remain undefeated after two games. Lowe was uncovered as she was well outside the penalty box and struck a high shot to the right of Jets goalkeeper Claire Coelho for the ultimate winning goal.

Ray (19) has been capped by the Australian U-17 and U-20 national teams and scored her second goal in 15 games across three-plus seasons in the W-League, all with Sydney FC. Lowe (20), who replaced Ray in the game in the 69th minute, has made one appearance with the Matildas national side in 2018 and played at UCLA in 2019. This was her third W-League goal, after scoring two in 27 games with Western Sydney across three seasons. Andrews, who won two caps with the Matildas in 2015, now has 36 goals in 97 matches in her 11th W-League season, all with Newcastle.

In a match featuring the two teams in the league with no imports this season, Sydney FC led in possession over Newcastle (60% vs. 40%) but shots (12 vs. 9) and shots on target (4 vs. 4) were more reflective of the competitiveness of the match. Sydney FC now has a 14-5-4 (W-L-T) record all-time against the Jets, and has won 9 of the past 11 games in the Northern New South Wales city.

Emily Condon scored the only goal in the 80th minute from the penalty spot to give Adelaide United a 1-0 home win over Perth Glory on January 9. Chilean international Maria Jose Rojas creatively dribbled away from two defenders on the left wing and into the goal box where she was taken down by Glory defender Natasha Rigby. Rojas again showed exquisite dribbling skills on a long foray in the 55th minute, finishing with a shot just over the goal. Rojas played for Canberra United in 2018/19. Condon has been capped once by the full national side in 2018 and also has multiple U-20 caps. Condon (22) now has 9 goals in 62 W-League games across 7 seasons, all with the Reds. Adelaide had the clear advantage in possession (58% vs. 42%), but Perth had more shots on goal (6 to 4) and the sides were virtually even for total shots (13 vs. 14) compared with Adelaide. All of Adelaide’s shots on goal came from Condon 4 shots.

Lily Alfeld wins #SOTW off the back of a glorious Westfield #WLeague debut!! 👏#OneGlory pic.twitter.com/AqHE1nxVYb

Both goalkeepers had solid games with Adelaide’s Australian U-20 international and Scottish born Sian Fryer-McLaren (in her seventh league season and fifth with Adelaide) facing 6 shots and making 6 saves, while New Zealand youth international Lily Alfeld made her W-League debut for the Glory, making 3 saves from 4 Adelaide shots. Alfred (24) played at Louisiana State University from 2014-17 and then with the Northern Lights in the New Zealand National Women’s League. Alfeld (who has been capped at the U-17 and U-20 level and has participated in senior camps but not yet appeared in an official game) is one of three young New Zealand international Football Ferns who made the long trip to Perth from Auckland for their first W-League season, including senior internationals defender Liz Anton (21) and midfielder Malia Steinmetz (20), with the latter captaining the U-20 side in New Zealand and both Anton and Steinmetz playing in the 2016 and 2018 U-20 Women’s World Cups in Papua New Guinea and France, respectively.

Melbourne Victory used two first half goals and four in the second for a devastating 6-0 derby victory against their rivals and champions Melbourne City on January 10. The 6 goals difference was the largest ever margin of victory in the derby, surpassing two 4-0 City wins in 2015-16 and last season. New Zealand international midfielder Annalie Longo and Australian youth international Melina Ayres each scored within the first half-hour to give Victory a solid 2-0 halftime advantage.

In the second half, Lisa De Vanna scored her 40th goal in 107 W-League matches on a brilliant 70 yard solo run after letting the ball run past her to avoid City’s Matilda center back Jenna McCormick as she started her move towards goal; De Vanna is now just behind now retired Asheleigh Sykes (41) and Kate Gill (42) and only three goals behind Leena Khamis (Western Sydney) who is 5th all-time in W-League scoring with 43 goals.

Amy Jackson (the former Florida International University player) scored her 15th goal in 104 W-League appearances in 10 seasons and scored against the side that she won three Grand Finals with. American Catherine Zimmerman (ex-Providence College who played 5 games with Sky Blue FC of the NWSL in 2016) and Australian youth international Kyra Cooney-Cross completed the scoring in the 90th and 92nd minute respectively.

All three Americans played the entire match for Melbourne Victory, with Zimmerman in midfield, Kayla Morrison (ex-University of Kansas) in defense and Argentinian international and American-born Gaby Garton recording the shutout in goal.

The win moves Victory up to third place on four points after two games while City is seventh on one point after three games. One goal in the first quarter of the season is not enough production to take them back to the playoffs at this rate. They may be looking for a new signing on the front line. The Victory improved their all-time record in the derby to 5-6-0 (W-L-D).

Melina Ayres had one goal, one assist, saw another shot hit the crossbar and was hugely influential in attack as Melbourne Victory dismantled City in their 6-0 win.

Special mention must go to Lisa De Vanna’s 70-yard solo dribbling display and goal in the second half. She was largely written off for a spot with the Matildas for the Tokyo Olympics by former coach Ante Milicic but De Vanna (36) has given new national team coach Tony Gustavsson pause as she demonstrated that the speed, guile and dribbling ability that she first displayed to the world at the 2007 Women’s World Cup in China could still be useful to the Matildas, particularly in the latter stages of a match.

In an announcement that was not a surprise to followers of the A-League or W-League in Australia, the Newcastle Jets have been taken over by the Australian Football Federation and the newly formed Australian Professional League, after the club did not pay its league dues. Football Australia Chief Executive Officer, James Johnson explained that, “There were clear failings to adequately capitalize Newcastle Jets FC to meet the minimum requirements set to run an A-League and Westfield W-League club, and to operate a company in accordance with Australian law.” New investors in the team are being sought but the Jets will see out but the A-League and W-League seasons.

How things are looking on the ladder after Round 3, presented by Bunnings Warehouse 🔢#WLeague pic.twitter.com/p0wlQ4yAMx

Liga MX Femenil, Clausura Week 1: Monterrey picks up where they left off
Five storylines which will define the rest of the FAWSL season