Vlatko Andonovski: Rapinoe, Lloyd “ahead of” schedule on return to USWNT 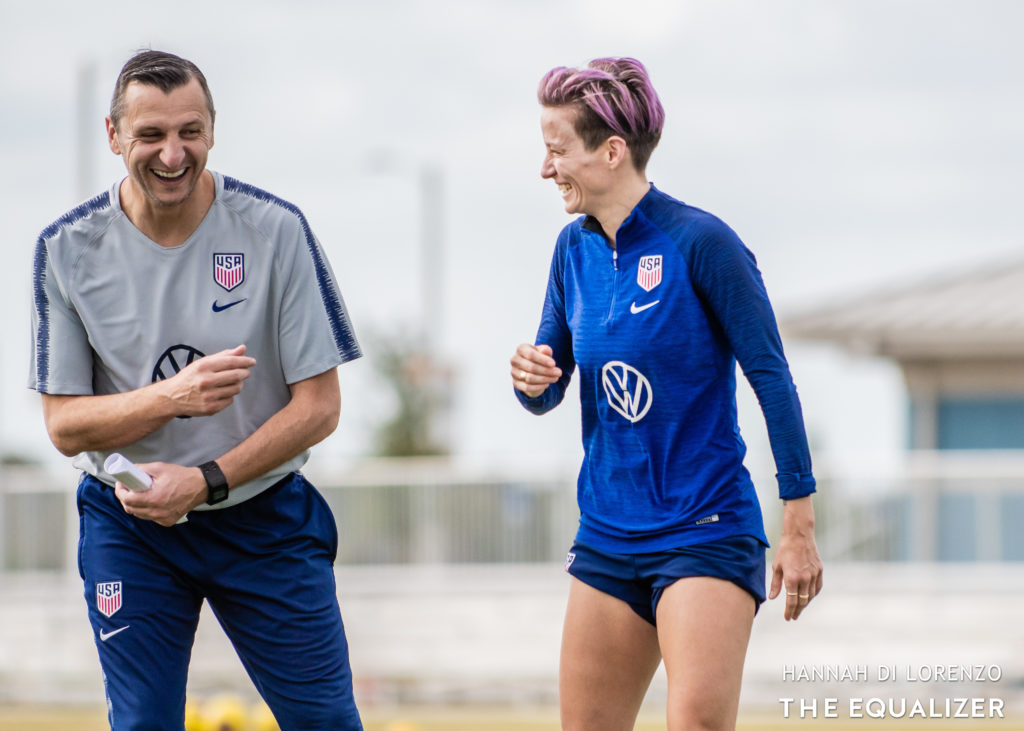 Vlatko Andonovski is ready to get the U.S. women’s national team together for the first time in 2021. This is the U.S. manager’s second January camp, and it’s a lot different than his first one.

Obviously, the world is still combating the COVID-19 pandemic. While numbers of cases and deaths are rising, the protocols for the national team are getting more strict. This is the second camp that the U.S. has held with COVID protocols in place. The team ran a successful camp in November, their first one in more than seven months.

Andonovski has called in 27 players to the camp, which will be held in Florida. Another reason why the January camp is different than previous ones is the slate of matches against Colombia. Usually, January camps are reserved for strictly training. However, due to the lull in competition last season, the U.S. was able to schedule two friendlies against Colombia on Jan. 18 and 22.

The camp, as well as the matches, will be held in Orlando. Players will begin to arrive this weekend, on Jan. 9.

Two players that are returning to the U.S. camp include Megan Rapinoe and Carli Lloyd. Rapinoe and Lloyd were both with the national team for the SheBelieves Cup tournament in February and March 2020. However, Lloyd battled a knee injury last year that kept her away from the national team and Sky Blue FC. Meanwhile, Rapinoe opted out of all National Women’s Soccer League competition last year.

Rapinoe spent time in the WNBA “Wubble” with her fiancée Sue Bird, who won the WNBA title with the Seattle Storm.

Andonovski, when speaking to the media on Wednesday, said that both players were monitored during their time away from the national team with GPS tracking devices. He said that Rapinoe and Lloyd did a “tremendous” job working out and getting in shape on their own.

“Everything is documented, everything they do, we follow,” Andonovski said. “We have a pretty good idea of where they stand. In fact, both of them are a little bit ahead of what we expected them to be, from the physical standpoint. The only thing they’re missing is the team training. It’s good that we have eight or nine trainings before going to the match. Both of them are excited to get the minutes in the first or second game.”

Andonovski further stated that, from a mental standpoint, Rapinoe and Lloyd are “refreshed.”

“Their minds are rested and they’re excited to be back in camp. I’ve been in constant communication with both of them, and they both can’t wait to get back to camp,” he said.

Bringing in the youth once again

While those two veteran players return to the national team picture, the youth is still breaking into the squad. During the November camp, Jaelin Howell replaced Lindsey Horan, who tested positive for COVID-19 before arriving to the November camp.

Meanwhile, Catarina Macario, who is still awaiting official transfer documentation from FIFA on her allegiance switch, joined the U.S. for the first time in Colorado. Both players were selected once again for the January camp.

Also making a big return is Emily Fox. The senior defender from the University of North Carolina was part of the national team picture under former coach Jill Ellis. However, late in 2019, Fox tore her ACL, which sidelined her for spring training. However, she recovered from her knee injury and featured in 12 matches for North Carolina. The ACC was one of few conferences to compete this year for fall women’s soccer.

Andonovski said that he and the national team staff were monitoring Fox’s recovery and minutes with UNC.

“I wouldn’t say she’s 100 percent in being the best, but she’s very close to it,” he said. “With this camp, it’s a good opportunity to get her back up to speed around the players and getting her a chance to experience the environment, so when she’s back to her best, her transition is seamless.”

Meanwhile, the focus for some of these young players during the camp isn’t just solely with the national team. The NWSL Draft is on Jan. 13, a few days into the camp. Fox is up for selection, due to her senior status, whether she registers or not, per the new NWSL Draft rules for 2021.

However, for Howell and Macario, all eyes will be on them to see if they declare for the draft or not. Andonovski said he hasn’t pushed a decision on either player, and just wants to help them succeed in any way he can.

“Then, they’re giving themselves a chance to be on the national team.”

A wide selection of players

While there are some familiar faces missing from this roster, there are 27 players meeting up in Florida for important training. The Summer Olympics are going to be here before the U.S. players, staff and coaches know it. Also, the federation is planning to host a SheBelieves Cup tournament despite COVID-19 cases surging throughout the country.

Andonovski said the purpose of this camp was to get a read on players and track progress.

“We brought in more players than usual. It’s a big camp. It’s a mixed group of players… I have a chance to see players that haven’t played for a long time and give them a chance to get back up to speed, and evaluate them around the players the have been part of the last few camps,” he said.

As for players that didn’t get called into camp — like Morgan Gautrat and Casey Short, for example — Andonovski said he still has a large list of players to look through. Also not in camp, Alex Morgan, who tested positive for COVID-19, as well as Christen Press and Tobin Heath, who will remain back in England with Manchester United.

“Obviously, it’s not just Morgan and Casey, there’s others who aren’t in this camp. We monitor them just like any other player [in our pool],” Andonovski said. “Right now, it’s not if they’re good or not, it’s how good they’re doing in comparison to some of the players that are in camp.”

The 10 best signings of the FA WSL season
FAWSL Week 11 roundup: One game only amid postponements