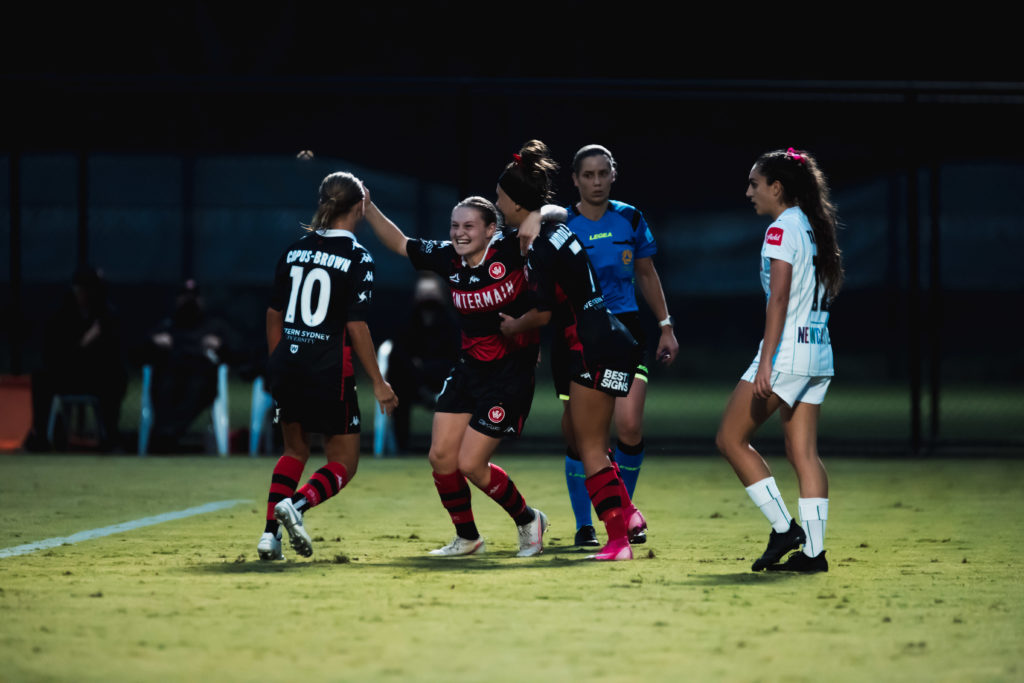 Round 2 of the new Westfield W-League season is already in the books, following a quick turnaround from the altered opening schedule. Here is how things played out over the weekend:

Western Sydney Wanderers bounced back from their 3-0 derby defeat to Sydney FC three days earlier and started the New Year with 3 points, defeating Newcastle Jets, 2-1, in Sydney on Saturday in front of 279 fans in a limited ticket situation because of the COVID-19 pandemic. Rosie Galea scored both goals for Wanderers, in the 21st and 52nd minutes, while Tara Andrews scored her 35th W-League goal in 95 games for the Jets just after the start of the second half.

Galea’s first goal came after a bad giveaway by Jets defender Cassidy David inside her own penalty box; Galea chased and turned the ball into the lower left corner of the net. Wanderer goalkeeper Courtney Newbon spilled a shot from Jets forward Sophie Harding and Andrews followed up to score from close range. Galea slotted the winner after W-league veteran Leena Khamis’ strike from outside of the box bounced off of the crossbar and she beat two defenders to the ball.  Khamis was dangerous all game in attacking Newcastle from deep positions and played a role in both goals.

Absolutely on fire Rosie Galea. A brace in just her second #WLeague appearance 🔥

The two sides were nearly equal on possession (51% for Newcastle to 49% for Western Sydney) and passes (404 for Newcastle to 397 for WSW) but Newcastle had a sizeable advantage in shots (22 to 9), shots on goal (8 to 3) and corner kicks (4 to 0), as they fought back in the second half in an attempt to tie the game after Galea’s second score. Galea, 20, is in her third season in the W-League, after joining Wanderers from Canberra after the 2018-19 season. She has played as many games this season (two) as she did in her two previous W-League campaigns.

A frantic last 15 minutes of the Canberra United vs. Melbourne City match on Sunday at Viking Park in Canberra saw the home side’s Michelle Heyman score her fourth goal in two games in the 73rd minute — all after returning from retirement since the end of the 2018-19 season.

.@Mheyman23 can't stop scoring for @CanberraUnited! What a finish ☄️

Four minutes later, Melbourne City captain and Matildas defender Jenna McCormick headed home from a long free kick from Japanese international and substitute Chinatsu Kira, who moved to City from Urawa Reds in December, with Kira making a significant impact in her first W-League appearance (delayed by initial quarantine). Canberra United won the match 2-1 when Nikki Flannery scored a dramatic injury-time winner from about 25 yards in front of goal. After dribbling around two defenders, she shot the ball into the far corner of the net past Teagan Micah in goal. The win put Canberra top of the table with 6 points after two rounds.

The 2-1 victory was played in front of 1,398 fans. It was also Canberra’s second win in two games this season from an injury-time goal. It was a historic first loss for Melbourne City since January 2019, at the end of the 2018-19 season — an undefeated run of 17 matches. McCormick, who has played abroad in Iceland, Norway and Spain, joined City a few weeks ago from Real Betis in Spain. She had interest from a few NWSL sides prior to the 2019 season.

Originally Melbourne Victory was scheduled to visit Perth on Saturday,  but it was changed to a home match against Brisbane Roar on Sunday.

Brisbane Roar played to a second consecutive scoreless tie against a Melbourne side, this time against the Victory on Sunday, after the same result at home against Melbourne City on Dec. 28. American-born goalkeeper Gaby Garton, who plays internationally for Argentina, started for the Victory and had two crucial second-half saves from Roar and Matildas forward Emily Gielnik — including one in the 85th minute, when she was flew to tip the shot onto the crossbar and out of play to preserve the shutout, finishing the game with four saves.

A wonderful fingertip save from @victorywleague's Gaby Garton denies @EGielnik late in the second half.

Nikki Flannery scored a magnificent late goal in injury-time to not only keep the Greens perfect at the top of the table, but also end Melbourne City’s unbeaten run that lasted since early 2019. She popped the ball over her head after she received it from a softly headed ball to switch direction on her nearest defender. Flannery then controlled the ball nicely and used fine dribbling skills to create the little space that she needed far from goal to take the winning shot into the opposite corner of the net. It was pure genius.

A goal worthy of winning any game. Take a bow, @nickii_flannery 🙇‍♀️

She told the Fox announcing crew after the game, “I thought I took too many touches and I said, ‘Just hit it Nik, it’s the last few seconds of the game.’ I’m so happy, the girls put in such a great shift. I’m just so happy — I’m breathless.” Flannery is in her sixth W-League season, all with Canberra except for last season when she played with the Newcastle Jets. If she continues in this form, she will be on the radar not only of national team program coaches but of club coaches from abroad as well.

Perth Glory signed Gemma Craine, who played at San Diego State University after winning a National Junior College Athletic Association Division 1 Championship at Monroe Community College in New York City in 2015. A native of England, she spent time with the English U-17 national team and at Chelsea’s academy.

Newcastle Jets re-signed Tara Andrews for the 2020-21 season. This will be her 10th W-League season, all with the Jets. She played in the USL’s now defunct W-League in 2014 and 2015, leading the Colorado Pride to the league final in 2015 as the league’s Most Valuable Player and the Golden Boot winner with 18 goals.

W-League is part of a new structure, independent of Football Federation Australia

This year marks the full independence of the men’s A-League, Westfield W-League, youth Y-League and e-League from the Football Federation Australia, joining together into a new organization known as Australian Professional League (APL). After a process that took about eight years to finalize, the professional leagues can now operate as true businesses and it will be interesting to see the strategies that the W-League develops over the next few years to capitalize on the 2023 Women’s World Cup which will be staged in several venues in Australia and New Zealand.

One element of the Australian Professional League plank is that every A-League franchise includes a W-League club. There are currently four men’s sides without a W-League affiliate:

Central Coast Mariners — an original W-League member in 2008-09 but have not had a side for over a decade.

Macarthur FC — an expansion franchise this season in southwestern Sydney.

Wellington Phoenix — The side in the New Zealand capital which joined the A-League in 2007-08 was close to adding a W-League franchise for this season, with the effort falling apart due to the number of New Zealand citizens that could be fielded as ‘imports.’

Western United — The second-year club is based in the Western suburbs of Melbourne.

There still needs to be room in the W-League for independent women’s organizations like Canberra United, an original W-League member who have won three Premierships and two Grand Finals, who are off to a flying start this season.

The Newcastle Jets ownership group had their A-League and W-League licenses revoked on Sunday, an immediate termination announced due to “the entity’s failure to pay its debts as and when they were due, which placed it in material breach of the Club Participation Agreement.”

“There were clear failings to adequately capitalize Newcastle Jets FC to meet the minimum requirements set to run an A-League and Westfield W-League club, and to operate a company in accordance with Australian law,” Football Australia CEO James Johnson said.

“Following the recent announcement of the unbundling of the Professional Leagues from Football Australia, it’s pleasing to see a group of existing APL Club investors stepping in to assume control of Newcastle Jets FC in the interim. It is important for Football Australia to remain separate to the ownership of the Clubs so that it can effectively carry out its responsibilities as the governing body of football in Australia and regulator of the Professional Leagues.”

A new license will be issued to an entity owned and controlled by a consortium of existing APL club investors, who will operate the license on an interim basis until a new investor is secured.

.@CanberraUnited currently top the Westfield #WLeague ladder at the end of Round 2 presented by Bunnings Warehouse 🔨 pic.twitter.com/eEIoG6QWy4