Westfield W-League Review, Round 1: Heyman returns with a hat trick 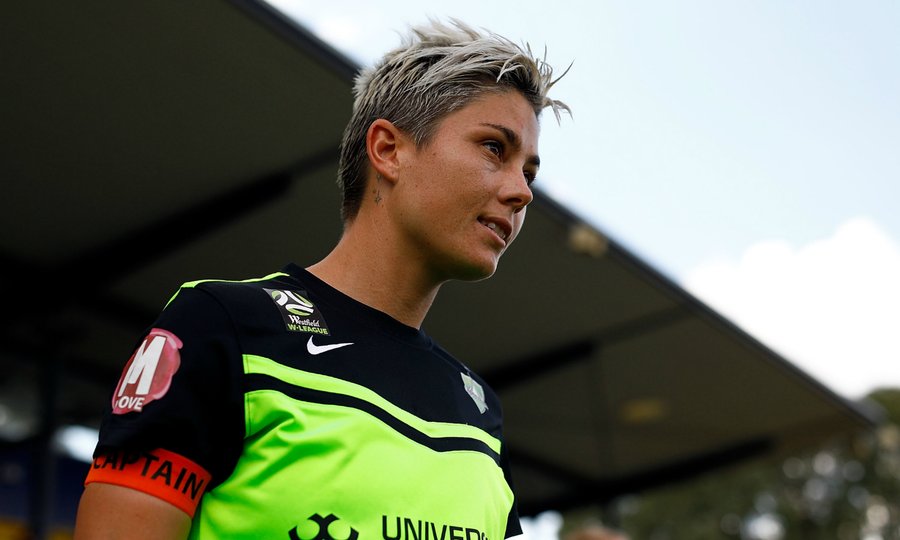 The W-League 2020/21 schedule has changed substantially from what we reported in our full-season preview on Dec. 22 due to COVID-19 health restrictions in the country. Thus, only three games were held in the first round to open the W-League’s thirteenth season.

Brisbane Roar had the bulk of attacking play against visiting 2019/20 champions Melbourne City on Tuesday, but ended up disappointed with two dropped points at Dolphin Stadium in suburban Redcliff, in front of a crowd of 1,174.

The Roar had 30 shots to only six for Melbourne City (8-1 for shots on goal). Brisbane’s passing was much more consistent and coherent, reflected in their 73% passing effectiveness to 60% for City, with Roar attempting 90 more passes than did City (427 to 337). The difference in the game was City goalkeeper Teagan Micah, who was the third goalkeeper for the Matildas national team last summer in France and played at UCLA. She finished with seven saves to help her side earn a point, avoiding its first loss since January 2019, at the end of the 2018/19 season — the only season in City’s five previous W-League campaigns that they have not won a Grand Final title.

.@MelbourneCity's @TeaganMicah put in a performance to remember between the sticks yesterday 🧤

Australian international Tameka Yallop (ex-Boston Breakers in 2012 in the WPSL-Elite) and Emily Gielnik (with Vittsjo in Sweden earlier this season) had eight and six shots, respectively, while new local signing Mariel Hecher had an impressive debut on the wing, finishing with four shots. Hecher is a native of Brazil and has played the last three seasons with Lions FC of the NPLW Queensland League, winning the Golden Boot last season for the championship-winning side.

Western Sydney Wanderers hosted the first derby of the season in front of a crowd of 3,027 on Wednesday, but fell to 2019/20 Grand Finalists Sydney FC, with Australian international forward Princess Ibini leading the way with two second-half goals. Ibini’s first goal was a powerful shot from just outside the penalty area on the left side into the far top corner of the net on the hour mark.

Canberra United defeated visiting Adelaide United 4-3 on Wednesday, with Michelle Heyman returning from her football retirement at the end of 2018/19 to score a second-half hat-trick in a stirring game that saw the teams deadlocked at 2-2 entering the 90th minute before three extra-time tallies, including one from the only NWSL loanee in the league this season — Mallory Weber from Kansas City — who rejoined Adelaide United following a successful 2019/20 campaign (see below).

Laura Hughes (19) scored the other goal for Canberra. Hughes made her debut for United when she was 15 and is in her fourth season with the Greens. She spent the summer with Throttur Reykjavik in Iceland, who were promoted for the 2020 season and she scored two goals in 15 matches as they finished in a three way tie for fifth with 18 points (4-6-6 W-D-L), two points ahead of relegated FH in the 10-team league.

Adelaide raced to a 2-0 lead on goals by Maria Jose Rojas and Isabel Hodgson to lead Canberra 2-0 at halftime. The well-traveled Rojas (33) is a Chilean international and 2019 Women’s World Cup team member who played at the University of Texas-San Antonio and with the Gulf Coast Texas of the WPSL before playing in Germany’s Frauen-Bundesliga, Lithuania, the Czech Republic, Chile, Japan’s Nadeshiko Division Two and with Canberra United in the W-League in 2018/19, as well as with Adelaide University in the South Australian state league. Hodgson (24) played collegiately in the U.S. at East Tennessee State University and is in her sixth season with the Reds.

The forward scored a crucial hat-trick in the 4-3 victory over Adelaide in her return to the club where she played for eight seasons and led Canberra to two Grand Final titles. Her three goals take her W-League total to 66 — second to Sam Kerr’s record haul of 70 — and within reach to capture the all-time goal scoring lead again this season. She also tied with Kerr and Brisbane Roar’s Tameka Yallop for most career W-League hat-tricks with four.

Re-watch her three goals as she helped her @CanberraUnited defeat @AdelaideUnited 4-3.

New signings by league teams after our preview last week include:

Western Sydney Wanderers FC signed Republic of Ireland international forward Julie-Ann Russell. She has played at the club level for Peamount United and University College Dublin as well as for Los Angeles Strikers in the USL W-League in 2011. In Ireland, she has been the FAI Senior Women’s International Player of the Year as well as the Women’s National League Senior Player of the Year and has over 50 caps at the senior level. She has been in Australia since 2017 attending Sydney University and played for their New South Wales state league powerhouse side.

Melbourne City signed Australian international central defender Emma Checker (24), after she returned from playing in France with Fleury 91, where she suffered a stress fracture in her fibula. She played for City last season and helped the club win the Premiership (regular season title) and Grand Final (League Championship). She has five caps for Australia. If she can stay healthy, she should top 100 W-League appearances in her career as she currently has 92; she began her W-League sojourn as a 15-year-old for Adelaide United in 2011/12.

Alex Chidiac also returned from Europe to join Melbourne City as she has quit Atletico Madrid in Spain after three seasons. She was a high-profile signing from Adelaide United after the 2017/18 season as a 19-year-old. She played with Atletico Madrid in 22 games with three goals in total, 19 of those appearances coming in her first season of 2018-19, after which injuries and an inability to make a deep starting 11 at Atletico severely limited her playing time. She was a surprise omission from the Women’s World Cup team in France in 2019; she won a double (Premiership and Grand Final) in 2015/16 with Melbourne City. She has made a total 38 appearances with 4 goals in four W-League campaigns.

Margot Robinne of France has experience of playing in the first- and second-tier leagues at home but is now Australia-based and has played NPL at Bulleen Lions and Bayside United, before moving up to the W-League with Melbourne City this season.

Melbourne City also signed Japanese international midfielder Chinatsu Kira, who has five goals in 12 internationals for her country and has played for 10 seasons with Nadeshiko League One 2020 season champions Urawa Reds, who will join the new fully professional WE League which will begin in the fall of 2021. This is Kira’s first time playing for a club abroad.

Isobel Dalton (ex-University of Colorado in the States) has recently left Napoli of Italy, after joining Glasgow City in Scotland this past summer, to rejoin Brisbane Roar. Dalton featured in four games with Napoli, who are mired at the bottom of the twelve team Serie A with only one point from 10 games. Dalton has been capped at the U-17 level and is in her third season with the Roar.

Former U.S. international Kendall Fletcher (36), who left the Seattle Reign after the 2016 to go to divinity school in Sydney and played three seasons in WPS, is back for her fourth stint with Canberra United. She last played for the club as a guest player in a limited role in the 2017/18 season, after winning the Grand Final with Canberra in the 2014 season. She was on the U.S. side that won the inaugural U-19 (now U-20) Women’s World Cup in Canada in 2002.

Adelaide United signed English forward Fiona Worts (24), who has played for Coventry United (2019-20) and Leicester City (2018-19) in the FA Women’s Championship (second tier). She is now based in Australia and has played with Adelaide University and Fulham United in the South Australian WNPL.

Adelaide United also received a huge boost with the news that American Mallory Weber is returning on loan for her second season with the club. She was hugely influential in 2019/20 as she scored four goals and was a leader on the team that was always competitive but finished in eighth place. She was voted the club’s Player of the Year. She comes on loan from Kansas City (formerly Utah Royals FC). Weber said about her return: “I’m super excited to re-sign back here with Adelaide United, especially after last season. To have another year here with the club is amazing and I’m just really grateful to be playing in the W-League again. This season we really want to improve on last year’s results and our aim is to make play-offs and see what happens from there.” 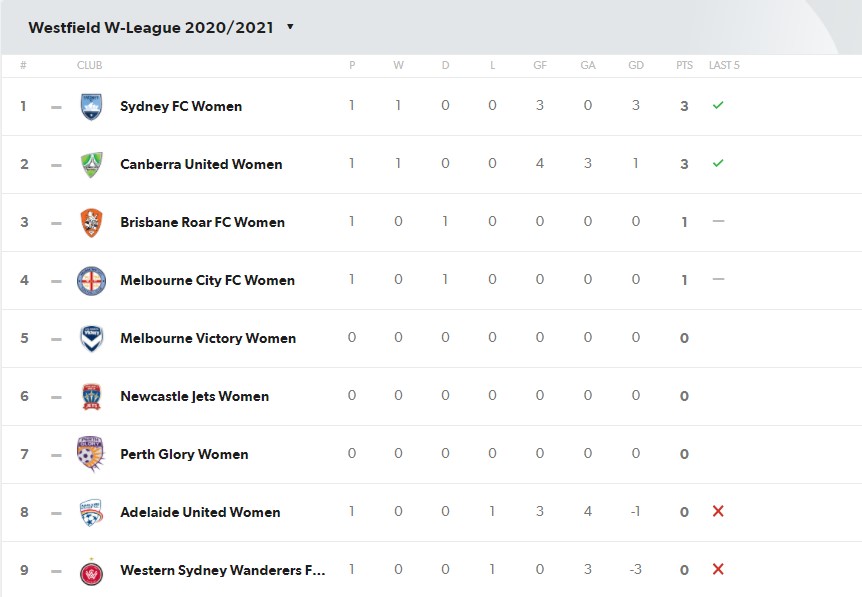