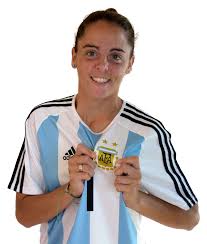 Argentina will once again have representation in the National Women’s Soccer League. On Tuesday morning, Kansas City announced the signing of Mariana Larroquette, a member of the Argentina women’s national team. The deal is for two years. No terms were disclosed.

The first-ever Argentinian to feature in the NWSL was Estefania Banini, who rostered with the Washington Spirit from 2015-18, and currently features for Levante in Spain.

Larroquette, a forward, is heading to the United States from Norway, where she featured with Lyn Club. In 2020, she made three appearances for the Norway club. Her career began with River Plate, where she remained from 2010-15. Then, she joined Universidad de Chile from 2016-17, before returning home to Argentina to feature for UAI Urquiza from 2017-20.

Larroquette has scored eight goals in 16 appearances for Argentina. She was part of the 2019 FIFA Women’s World Cup team.

She scored three of those goals during last year’s Pan American Games competition, where Argentina took the silver medal behind Colombia and ahead of Costa Rica.

“Whether it’s on or off the field, our goal is to bring talented people together to create something special,” Huw Williams, Kansas City head coach, said. “Mariana is a talented player who competes creatively and tenaciously. We are happy to sign Mariana as our team’s first-ever free agent.”

The Equalizer Podcast: Looking back on 2020
Michele Vasconcelos finally made it home. Then, her team moved