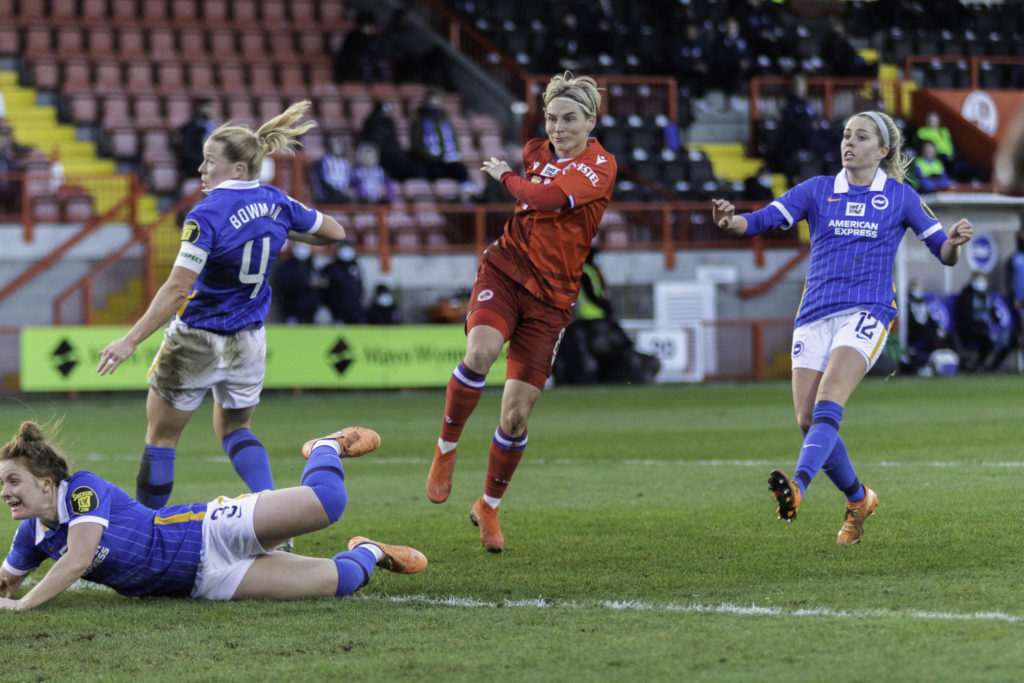 It was a light weekend in the Barclay’s Women’s Super League, as just three matches were played on Sunday, with three others postponed. Manchester United and Arsenal both won comfortably, while Reading earned a more competitive win over Brighton. We recap the action below!

🥳 Top of the #BarclaysFAWSL table for chirstmas.

🎁 What a gift for them and their fans 🎁 pic.twitter.com/493GmzCweg

Manchester United finished off the year with a convincing 6-1 win over last place Bristol City on Sunday. The unbeaten Red Devils opened the scoring in the 26th minute through a screamer from outside of the 18 by Leah Galton. Bristol were able to hold off United for the rest of the first half, but the floodgates opened after the break.

Second half goals by Millie Turner, Jess Sigsworth, another by Galton (that’s four goals in three WSL games for Galton), and two by Tobin Heath (in three minutes!) sealed the win.

Bristol did manage a consolation goal in the 72nd minute, courtesy of a great counterattacking run by teenager Ebony Salmon.

Christen Press was back and available for United after two weeks away with an illness, but she did not feature in the match. On Wednesday, United shared a message from Press on Twitter: “Thanks for all the well wishes and love these last few weeks…I’d never been so sick in my life (no I did not have COVID). Happy to report I’m feeling much better, I’m back in training with the team and I’m getting stronger every day. I’m so looking forward to the next time I get to play.”

After a poor performance last weekend against Manchester City, four different Arsenal players scored en route to a 4-0 win over an injury ridden Everton side on Sunday.

Jordan Nobbs and Caitlin Foord got the Gunners off to a strong start, scoring similar tap-in goals in the 4th and 10th minutes respectively. Everton were let into the match by Arsenal when first half defensive giveaways by Leah Williamson and Jen Beattie gave them two great chances to equalize, but the Toffees couldn’t convert.

But Arsenal took control in the second half, adding a header goal by Beattie and a beautiful strike by Beth Mead to their goal tally.

Arsenal manager Joe Montemurro chose to have striker Vivianne Miedema start the match on the bench, but she did come on midway through the second half.

Arsenal have been very consistent against mid-table teams this season, but the fact still remains – if the Gunners want to snag one of three Champions League spots allotted to WSL clubs, they’ll likely have to earn more points against the likes of City, United, and Chelsea in 2021.

Everton, on the other hand, have two points from their last five WSL matches. They haven’t looked the same since their run to the FA Cup final in November, and are still missing key players Valerie Gauvin, Rikke Sevecke, and Claire Emslie, all out with injuries. Many considered Everton as a darkhorse to challenge the top teams this WSL season, but wins over Chelsea and United in the FA Cup and League Cup respectively have not yet been replicated in the league.

Just in time for the holiday break, Reading were gifted two huge defensive errors from Brighton en route to a 3-1 win on Sunday.

In the 17th minute, Jessica Fishlock capitalized on an errant pass from Brighton into the centre of the pitch. Fishlock drove to the 18-yard-box, where a Brighton defender slipped, giving her extra time to place her shot perfectly passed keeper Cecilie Fiskerstrand.

Brighton managed to equalize just minutes later from the spot, but another defensive error helped Reading take back the lead just before half-time. Brighton gave up the ball to Lily Woodham on the wing, who sent in a cross that fell to Fishlock. She finished it off once again for the brace.

In the second half, Fishlock also added an assist to her tally, delivering the through ball to Rachel Rowe for the insurance goal.

With the win, Reading sit solidly in the middle of the table, in 6th place with 13 points from 10 games. Brighton are 9th, with 8 points from 10 played.

With a number of COVID positives coming back “within the Chelsea FC Women’s team set-up after the last round of testing,” Sunday’s match against Spurs was postponed.

Chelsea did play midweek in the Champions League round of 32, beating Benfica 3-0 at home (8-0 on aggregate).

UWCL Round of 32 wrap: Usual suspects move through safely

“A small number of individuals returning positive tests for COVID-19” at West Ham’s training ground forced the postponement of their match against Aston Villa on Sunday.

Sunday’s match between Birmingham and Manchester City was also postponed, but due to a waterlogged pitch in Birmingham. This is the second week in a row that Birmingham’s pitch has not been in good enough shape to host a match, as last week’s tie against Everton was also postponed due to unsuitable playing conditions.

City did get one match under their belt this past week, as they defeated Göteborg 3-0 on Wednesday in the Champions League (5-1 on aggregate).

The WSL will now take three weekends off for the holiday break and will resume on Saturday, January 9th.