UWCL Round of 32 wrap: Usual suspects move through safely 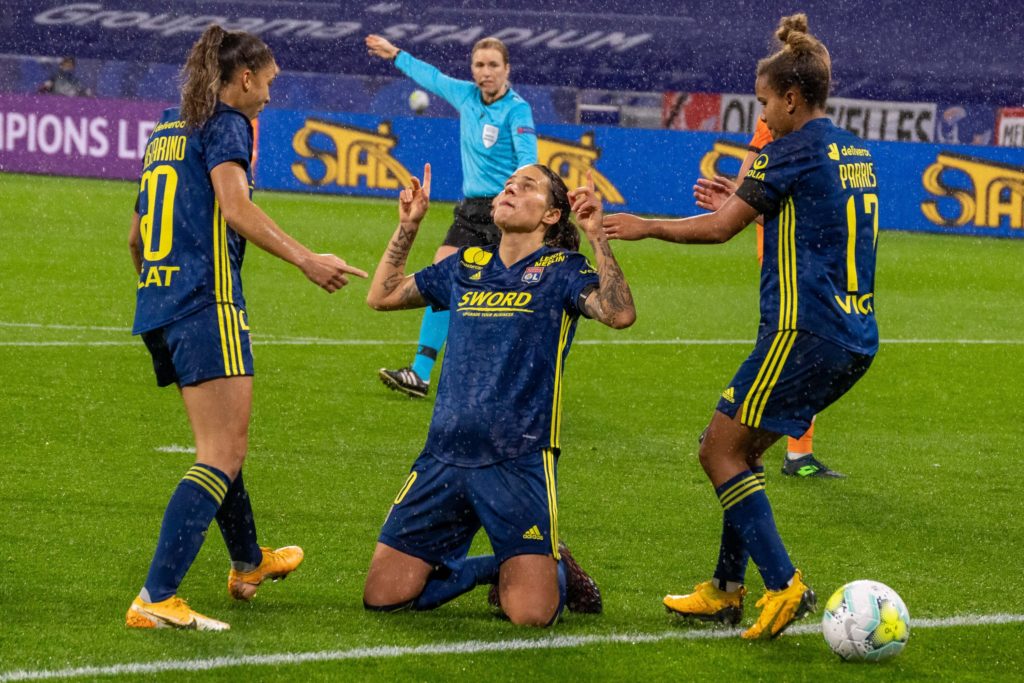 The UEFA Women’s Champions League Round of 16 field is nearly set as teams advance to fight it out in 2021. Lyon are through again, as are 14 other clubs (one series was postponed) battling to dethrone the five-time reining champs. Here is a quick look at the second-leg matches from the Round of 32, with home teams listed first. Round-of-16 matchups will be drawn Feb. 16, with games in the first and second weeks of March.

Juventus played the holders tough again but Lyon advanced safely behind an early goal from Dzsenifer Marozsan that upped the aggregate lead to two. Melvine Malard and Janice Cayman added late goals to make it a runaway.

Emma Snerle’s first-half, stoppage-time goal made it 4-0 on aggregate and erased any lingering doubts over Hjorring advancing to the last 16.

Caroline Graham Hansen and Lieke Martens scored braces and Barcelona did little to dissuade anyone believing they are the top challengers to knock off Lyon. For the second straight match, Joelle Smits scored in the closing moments to keep PSV from being blanked.

Rosengard did not hold back, opening up a 3-0 lead after 17 minutes and 4-0 after a half hour. Jelena Cankovic had a hat trick and Anna Anvegard added two goals. Tougher times lie ahead for the Swedish victors.

Fridolina Rolfo and Shanice van de Sanden scored second-half goals to build on what was already a decisive lead on the aggregate for the 2020 runners-up.

Kamila Kulmagambetova’s 35th-minute goal stood up as the only one on the day to send Kazygurt through on away goals.

Minsk won the day on Anastasiia Skorynina’s goal in the 72nd minute but they needed an equalizer for the tie. It never came and LSK went through. Emilie Haavi’s goal in the 2nd minute of the first leg turned out to be an early blow which Minsk could not overcome.

After struggling some in the away leg, Manchester City rolled into the Round of 16. Leading 1-0 at the half and 3-1 on aggregate, Georgia Stanway put it away with two goals in short order between the 65th and 68th minutes. Stanway had three goals over the two matches.

Daniela Sabatino’s goal five minutes into second-half stoppage time delivered Fiorentina a dramatic, 1-0 win and a 3-2 triumph on aggregate. The 35-year-old veteran also scored the goal in the first leg that left it a 2-2 draw.

The French domestic league leaders rolled in the home leg to make it a blowout on the aggregate. Canadian teenager Jordyn Huitema scored in the second straight leg and Irene Paredes added a pair. Former NWSL standout Nadia Nadim hit the opener for PSG. Ewelina Kamczyk got the honor of scoring for the Polish side.

Lucie Martinkova scored in the 7th minute to take some of the steam off the return leg in Scotland. The goal put Glasgow in a two-goal hole they could never climb out of.

Bethany England scored twice and Sam Kerr continued her sharp form with a goal as Chelsea eased through to the next round.

It took less than a minute for Lineth Beerensteyn to put Bayern ahead for the day and make the other 89 minutes mostly a formality.

The struggling Spanish club had surrendered two in the first leg but were always in charge in this one and ran off with the aggregate. Aissatou Tounkara and Toni Duggan were among the scorers.

Zurich managed only two shots on goal in their effort to flip the result of the opening leg and Lisa Makas put the tie away with an 84th-minute goal for the Austrian side.

Both legs were postponed and will be played in February.