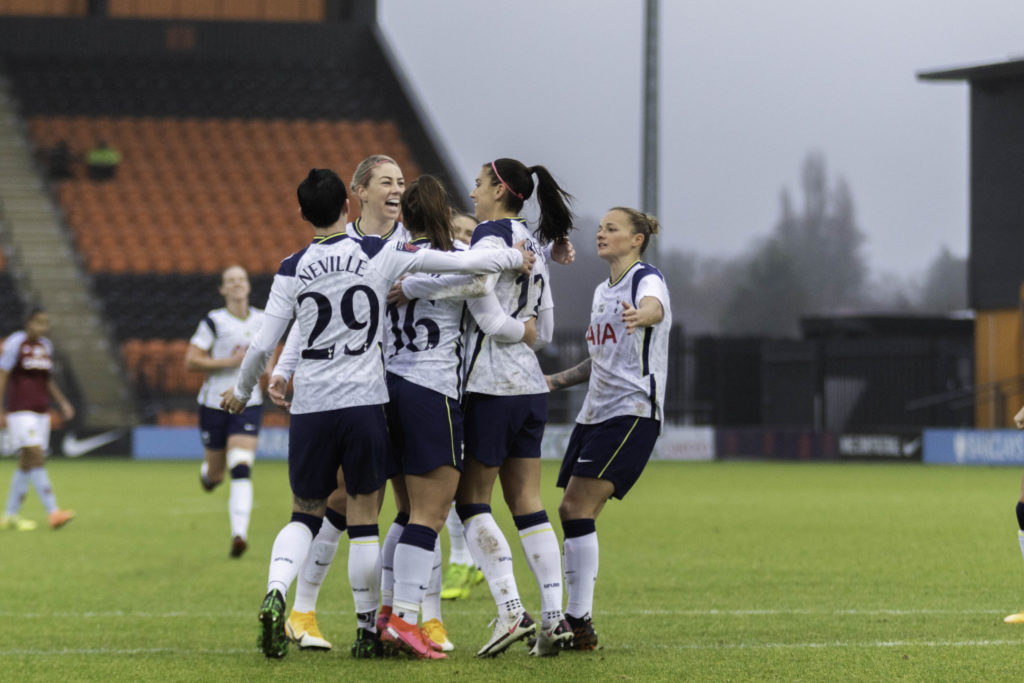 Take a look at women’s soccer around the world, including an update on Americans abroad — and a close race in Germany for the top seed.

The latest: Austrian Nicole Billa delivered four goals to move into the league lead with a dozen through 11 matches. Her quad was part of Hoffenheim’s 7-0 beating of Duisburg which kept Hoffenheim in 3rd place and in the mix for a Champions League berth. Turbine Postdam, who were forced to rally by SGS Essen, 2-1, trail Hoffenheim on goal difference but continue to hold a match in hand. Leaders Bayern fought to a 1-0 win at Frankfurt who fell to 7th.

The latest: Atletico Madrid stumbled again, losing 1-0 at home to Madrid. Atletico have won only two times from their last five league matches and have slumped to 5th place. They failed to equalize against Madrid despite their opponents playing the final half hour with 10 women following the ejection of Paola Ulloa. Meanwhile Real Madrid got braces from Olga Carmona and Lorena Navarro to rock Espanyol 8-1 and move into 2nd place and first among Madrid based clubs. Real host Atletico this Saturday. Barcelona meanwhile, continue to lead from behind. After rolling Valencia 7-0 away the holders are perfect through 8 matches and have three in hand on the two sides they are chasing.

The latest: The top two teams hosted the bottom two teams and the results were as expected. Marie-Antoinette Katoto scored four times for Paris Saint-Germain to key a 5-0 win over Le Havre. That keeps PSG a point clear of Lyon who used dueling hat tricks by Nakita Paris (four goals including three in six minutes) and Amel Majrie to wipe out Issy, 9-0. In a more significant result, Bordeaux beat Montpellier 2-0 to open up a four-point lead for third place and the final Champions League spot. Khadija “Bunny” Shaw scored Bordeaux’s first and lead the Golden Boot race 14-13 over Katoto.

The latest: Hayley Ladd’s 80th minute goal delivered victory for Manchester United, 2-1 over Reading while Caroline Weir scored in the 90th to give Manchester City a 2-1 win over Arsenal. Those goals dropped Arsenal four points off Man United’s lead, and Chelsea leapfrogged Arsenal into 2nd place with a 1-0 win over Brighton, courtesy of a goal from Sam Kerr. Click here for Emily Dulhanty’s full wrap-up of the weekend in the WSL.

Sam Mewis (Courage) scored the winner for Manchester City in the Champions League and the equalizer in a pivotal league win over Arsenal in which she was named Woman of the Match. Rose Lavelle (Reign) is injured and was unavailable for the matches. Caitlin Foord (Louisville) played the opening 80 minutes for Arsenal again Man City… Alex Morgan (Pride) created a penalty and then scored it to kickstart Tottenham Hotspurs to a 3-1 victory over Aston Villa, the club’s second straight since making a coaching change. Alanna Kennedy (Louisville) and Shelina Zadorsky (Pride) played 90 minutes for Spurs… Tobin Heath (Louisville) sent in the corner kick that ultimately led to Manchester United’s late winner in the 2-1 win over Reading that kept them atop the WSL table. Christen Press (Louisville) is sick and was not available for the match. Jess Fishlock (Reign) sent in the ball that Man U defender Millie Turner deflected into her own net for the lone Reading goal… Emily van Egmond (Pride) was named Woman of the Match after scoring a goal and assisting on another in West Ham United’s 4-0 win over Reading. Rachel Daly (Dash) scored the goal that van Egmond assisted on… Denise O’Sullivan (Courage) played 90 minutes for Brighton & Hove Albion who lost 1-0 to Chelsea on a goal by Sam Kerr… Rachel Corsie‘s (Kansas City) Birmingham City and Claire Emslie‘s (Pride) Everton were postponed to due an unplayable pitch.

Evelyne Viens (Sky Blue) remains in good form after two goals for Paris FC in their 3-2 win over Dijon. Viens also set up the chance on the other Paris goal but no assist after the original shot was saved by the keeper before the rebound was finished. Kaleigh Rhiel (Louisville) played 90 for Paris… Celeste Bourielle (Thorns) went all the way for Fleury 91 in a 0-0 draw to Soyaux… Darian Jenkins (Reign) was not available for Bordeaux as the registered a key, 2-0 win over Montpellier… Jodie Taylor (Reign) was an unused sub in Lyon’s 9-0 win oever Issy. Celia Jimenez Delgado (Reign) has yet to be made available for Lyon.

Taylor Korniek (Pride) had little to say for Duisburg who were down 4-0 by the time she entered in the 63rd minute. They lost 7-0… Meaghan Nally (Thorns) played all 90 for Turbine Potsdam (d. SGS Essen, 2-1.)

Jade Moore (Pride) was an unused sub for Atletico Madrid whose sloppy form continued in a 1-0 loss to Madrid.