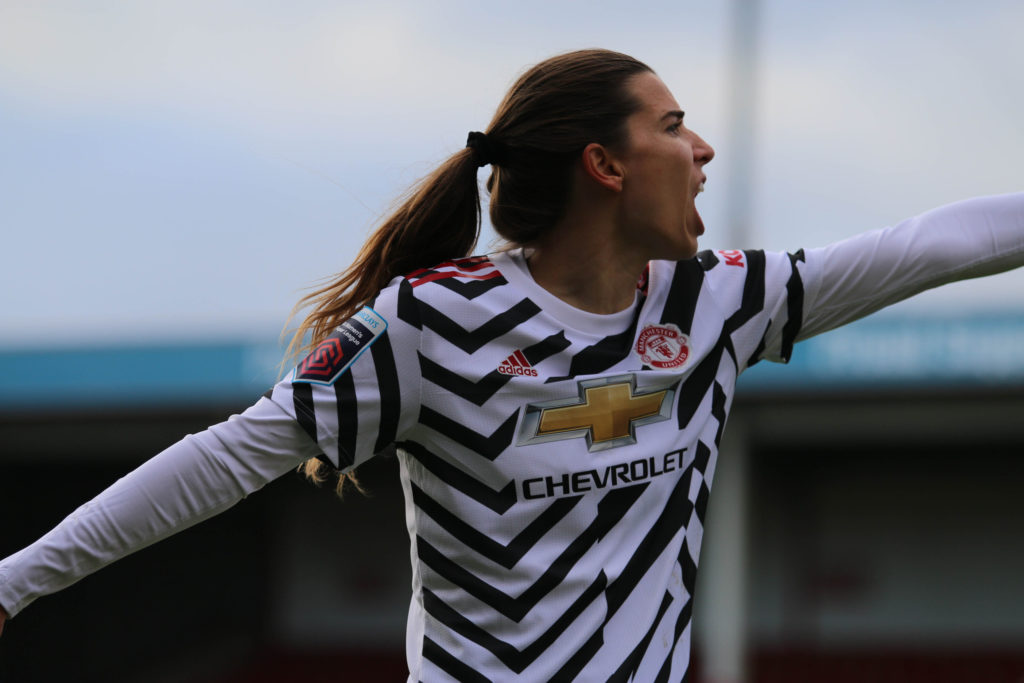 A number of close matches marked Week 9 in the Barclay’s Women’s Super League. Manchester City and Manchester United scored late goals to earn wins, while Chelsea also continued their winning ways to stay in contention with United at the top of the table.

Here's how the table looks at the end of game week 9! pic.twitter.com/sPShSWmu1v

Prior to Sunday’s match, both Arsenal and Manchester City wore warmup shirts with “Beattie 5” on the back in support of Arsenal and Scotland defender Jen Beattie who recently opened up about her breast cancer diagnosis in October. Beattie, who had surgery to remove a tumor and will undergo radiation therapy in the coming weeks, was in the starting XI for Arsenal.

And it was Arsenal who started on the front foot. Just over two minutes into the match, Vivianne Miedema took advantage of a sloppy attempt by City to play out of the back. Kiera Walsh couldn’t control a pass into danger from Lucy Bronze, and the ball fell to the feet of Miedema, who took a few touches and fired a shot from the edge of the 18 into the back of the net.

But City equalized at the half-hour mark when Sam Mewis got her head on a floated in corner kick. (Mewis also had a goal — the winning one — midweek in City’s 2-1 win over Göteborg FC in the Champions League.)

After their goal, City took control of the match, hoarding much of the possession and limiting Arsenal’s touches in City’s defensive third. After a few close chances, City were finally able to find the winner in stoppage time through a beautiful strike from Caroline Weir — and some suspect defending from the Gunners.

She wins it in the last minute of extra time!#BarclaysFAWSL pic.twitter.com/3y3zYlLWjP

With the win, City now sit in fourth place, one point behind Arsenal. Rose Lavelle was not available for City after she picked up an injury in last week’s match against Everton.

Chelsea remain unbeaten this WSL season after an early goal by Sam Kerr lifted the Blues over Brighton on Sunday.

In the 21st minute, Pernille Harder sent in a perfectly weighted cross to an incoming Kerr, whose header crossed the face of goal and sailed into the net, her seventh of the WSL season.

Bristol came close to an equalizer in the second half, when Inessa Kaagman turned at the top of the 18 and fired a shot off of the crossbar.

Chelsea were victorious midweek in the Champions League as well. The Blues traveled to Portugal and defeated Benfica 5-0, with goals by Fran Kirby (x2), Millie Bright, Pernille Harder and Bethany England.

United remain top of the league after a close 2-1 win over Reading on Sunday.

Leah Galton opened the scoring for United in the 32nd minute when she drove to goal with the ball at her feet. Beating her defender, Galton fired a powerful shot past Reading keeper Grace Moloney. But 10 minutes after the halftime break, Jessica Fishlock played a through ball in the 18 that deflected off of Mille Turner’s leg en route to the back of the net. The equalizer was recorded as an own goal.

As the minutes dwindled, the often extra physical affair looked like it was heading towards a draw. But in the 83rd minute, Reading were unable to clear a Tobin Heath corner kick, and Hayley Ladd, left totally unmarked in the goal area, headed in the winner.

Earlier this week, Heath and Casey Stoney were awarded player and coach of the month honors respectively for November.

Christen Press was unavailable for United on Sunday for a second week in a row.

Tottenham are two for two under new coach Rehanne Skinner, as they earned their second win of the season on Sunday. Alex Morgan scored her second in a Spurs shirt — another penalty goal – and drew the foul that lead to the penalty. She also sent in the cross that lead to Tottenham’s winning goal, an own goal by Villa defender Caroline Siems. Rosella Ayane added the third.

West Ham also earned their second win of the season on Sunday, a comfortable 4-0 defeat over Bristol City.

A first half own goal, along with second half goals from Emily van Egmond, Rachel Daly and Martha Thomas sealed the win for the Hammers.

👏 This is how you attack a cross @RachelDaly3 #BarclaysFAWSL pic.twitter.com/LGe73qGXil

Sunday’s tilt was postponed just over an hour before kickoff due to a waterlogged pitch at Birmingham’s SportNation.bet Stadium.

Villa faired better in their midweek tilt last Wednesday against Bristol, as they earned their second win of the season. Villa, newly promoted this year from the Championship, sit four points ahead of Bristol (with a game in hand). Bristol are in last place and occupy the sole relegation spot.