WoSo Around the World: Atletico slip up again in Spain 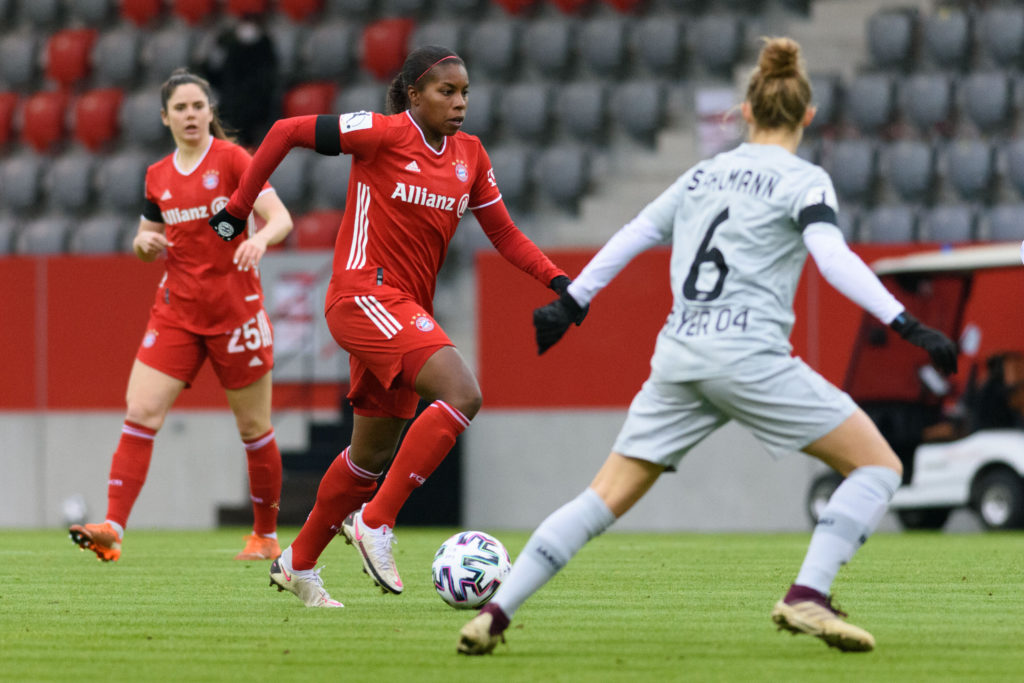 Take a look at women’s soccer around the world, including an update on Americans abroad.

The latest: Lieke Martens scored a hat trick in 15 minutes but was shown up by teammate Jenni Hermoso’s four-goal day as part of Barcelona’s 9-0 route of Santa Teresa. The result kept Barca perfect through seven matches. A day later, Granadilla Tenerife took provisional hold of first place by topping Real Betis, 3-1. Meanwhile, Atletico Madrid continued their slide on Saturday, holding a 3-1 lead on Athletic Club five minutes from time before conceding goals by Lucia Garcia in the 85th and 90th minutes to wind up in a 3-3 draw.

The latest: Khadija “Bunny” Shaw continues her quest for the Golden Boot, scoring twice for Bordeaux in a 2-1 win over Soyaux. The visitors nicked a late goal before halftime to take a 1-0 lead before Shaw hit in goals in the 56th and 84th minutes. She has 13 goals to lead Marie-Antoinette Katoto of PSG by four. Bordeaux remained in 3rd place which, for the first time, means a Champions League spot. As for PSG, Katoto scored the second and ultimate game winner in a 4-1 Derby win over Paris FC. They stayed a point ahead of Lyon, 3-1 winners away to Le Havre.

The latest: The top three clubs all posted wins on the weekend while Manchester City leapfrogged Everton into fourth place. Sam Kerr’s hat trick for Chelsea was the highlight of the weekend. For a full recap of the weekend in the FSL, check out Emily Dulhanty’s weekly review.

The latest: In the only match of the weekend, Klara Buhl scored in the 29th minute to deliver leaders Bayern Munich a 1-0 victory over Bayer Leverkusen. Action resumes Friday.

Alex Morgan (Pride) scored for the first time since the 2019 World Cup semifinal, burying a penalty to ice Tottenham Hotspurs first win of the season, 3-1 over Brighton & Hove Albion. She subbed out shortly after scoring. Alanna Kennedy (Louisville) played the same 85 minutes as Morgan and gave away the penalty that led to Brighton’s only goal. Shelina Zadorsky (Pride) went all the way for Spurs. Denise O’Sullivan (Courage) played the full 90 for Brighton… Rose Lavelle (Reign) was seen on crutches after Manchester City’s 3-0 win over Everton. Lavelle played the first half of the match. Sam Mewis (Courage) played the final 25 for City. Claire Emslie (Pride) is injured and was not available for Everton… Caitlin Foord (Louisville) headed home Arsenal’s first goal in the 57th minute of a 3-0 win at Birmingham, and subbed off at 70 minutes. Rachel Corsie (Kansas City) played 90 for Birmingham and was called for a handball in the box that led to a goal for Arsenal… Tobin Heath (Louisville) was active throughout her 90 minutes to help Manchester United down Aston Villa, 2-0 and stay atop the WSL table. Christen Press (Louisville) was unavailable for the match… Jess Fishlock (Reign) played 90 minutes for Reading in a 1-1 draw with Bristol City and had numerous chances saved throughout the match… Rachel Daly (Dash) had a goal, a yellow card, and a breakaway saved while playing 90 minutes for West Ham United, 3-2 losers to Chelsea. Emily van Egmond (Pride) also played 90 for West Ham.

Evelyne Viens (Sky Blue) scored Paris FC’s goal in a 4-1 loss to Paris Saint-Germain. It was only the second goal scored against PSG this season. Kaleigh Rhiel (Louisville) played 90 for Paris FC…Celeste Boureille (Thorns) went the distance for Fleury 91 who edged Guingamp 1-0… Jodie Taylor (NC Courage) was an unused sub for Lyon against Le Havre (d. 3-1) while Celia Jimenez Delgado (Reign) has still not been on the team sheet… Darian Jenkins (Reign) was an unused sub in Bordeaux’s 2-1 win over Soyaux.

Taylor Korniek (Pride) was not available for Duisburg who have Wolfsburf a tussle but ultimately bowed out of the German Cup, 3-1.

Jade Moore (Pride) came on in the 66th minute for Atletico Madrid and was part of the club’s late collapse that resulted in a 3-3 draw to Athletic Club. Moore took a yellow card in stoppage time.