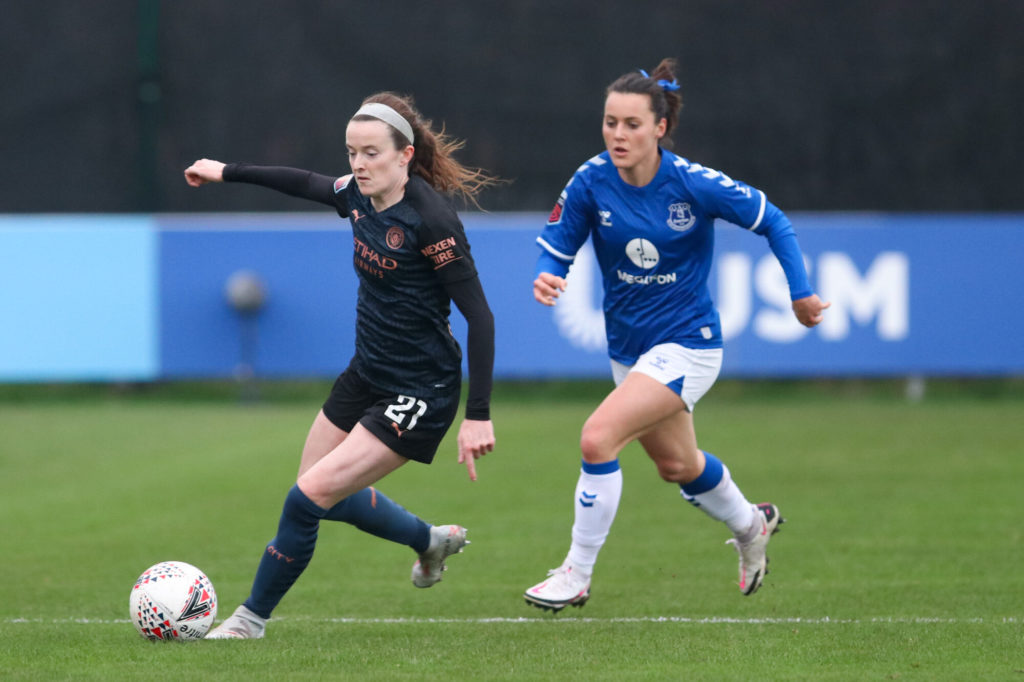 Photo by Will Matthews/Sports Press Photo

After a long international break, the FAWSL returned this weekend with the addition of fans in the stands at most stadiums. After earning three points, Manchester United stay atop the table, with Arsenal and Chelsea (with a game in hand) close behind. We recap all of the action below!

Caroline Weir was in a giving mood this weekend, as she supplied the service for each of Manchester City’s three goals on Sunday, delivering Everton their first home defeat of the WSL season. Ellen White finished off Weir’s cross in the 25th minute to open the scoring, while Gemma Bonner got her head on a Weir corner just two minutes later. Janine Beckie added the third at the end of the half.

Rose Lavelle started the match out wide for City, but sustained an injury before the halftime break. She was able to close out the half, but did not return to the match, and was seen on crutches on her way back to the pitch.

Lavelle on crutches as she comes back out of the changing room. Not limping heavily though, which is a good sign

The Fran Kirby-Sam Kerr connection was on full display on Sunday as the Blues downed West Ham 3-2. Back from an ankle injury that kept her out of the Chelsea squad for the month of November, Kirby supplied the service for two of Kerr’s three goals on the day (and now four of Kerr’s six WSL goals this season). Behold Chelsea’s beautiful first goal, involving a whole host of their powerhouse attackers:

West Ham, under interim manager Billy Stewart for the first time, were able to keep things close, as Rachel Daly equalized just after the half-time break. Kerr responded with two second-half goals, but Chelsea got a late scare when captain Magdalena Eriksson redirected a cross from Alisha Lehmann into the back of her own net in the 88th minute. But the Hammers couldn’t find an equalizer in stoppage time, and Chelsea were able to hang onto the three points.

Kerr’s hat-trick should come as a relief to Chelsea fans worried about her often less-than-ideal early season finishing, however seeing her pick up a knock after her third goal and leave the match is concerning for the Blues.

Chelsea are headed to Portugal on Wednesday for a mid-week Champions League clash with Benfica.

Birmingham were able to keep Arsenal off the scoresheet for nearly an hour on Sunday, including a fantastic stop by keeper Hannah Hampton on a penalty kick from Kim Little in the 20th minute. But Caitlin Foord broke the deadlock in the 57th minute when she headed in a cross by Katie McCabe at the back post. Jill Roord added a second just five minutes later with a bold first time shot that soared over Hampton’s glove and tucked just under the bar.

Captain Little wouldn’t be denied twice on the day, as she added to Arsenal’s tally from the spot in the 87th minute.

Just in time for the busy holiday schedule, Arsenal have seen the return of their deep bench, as Steph Catley and Jordan Nobbs both returned from injury on Sunday. The Gunners had been hit hard with injuries, with as many as seven players unavailable in the months of October and November.

Alex Morgan scored her first goal in a Spurs kit on Sunday en route to Tottenham’s first win of the WSL season.

Over in London, Morgan slots home the PK for the insurance goal. Spurs earn their first victory of the WSL season, 3-1 over Brighton.

Spurs were under the tutelage of manager Rehanne Skinner (a former assistant to Phil Neville’s Lionesses) for the first time on Sunday after co-coaches Juan Amoros and Karen Hills were let go in November. Earlier in the week, Skinner spoke to media about her side’s move to Hotspur Way Training Ground, the same facility where Tottenham’s men’s side train.

Bristol City deployed counter attacking football at its finest on Sunday to open the scoring against Reading. Beginning from their own six-yard box, Bristol worked the ball all the way up to Emma Bissell on the opposite penalty spot, where she finished a cross from Charlie Wellings.

But Fara Williams was in the right place at the right time at the start of the second half, as she slotted home a rebound to equalize for Reading in the 50th minute.

Leah Galton opened the scoring for United in the 25th minute on Saturday, when a beautiful pass from Hayley Ladd found her in on goal all alone. Aston Villa hung in the match for over an hour after conceding, and almost found an equalizer in the second half when Shania Hayles hit the crossbar from just six-yards out. However, a botched clearance in the 89th minute by Villa keeper Lisa Weiss gave Ella Toone the ball outside the 18. Toone chipped Weiss to seal the win for the Red Devils.

Christen Press was unavailable for United due to illness.

From eight players to mid-table: Birmingham City’s early-season success story
WoSo Around the World: Atletico slip up again in Spain