WoSo Around the World: More than half of EURO 2022 field is set 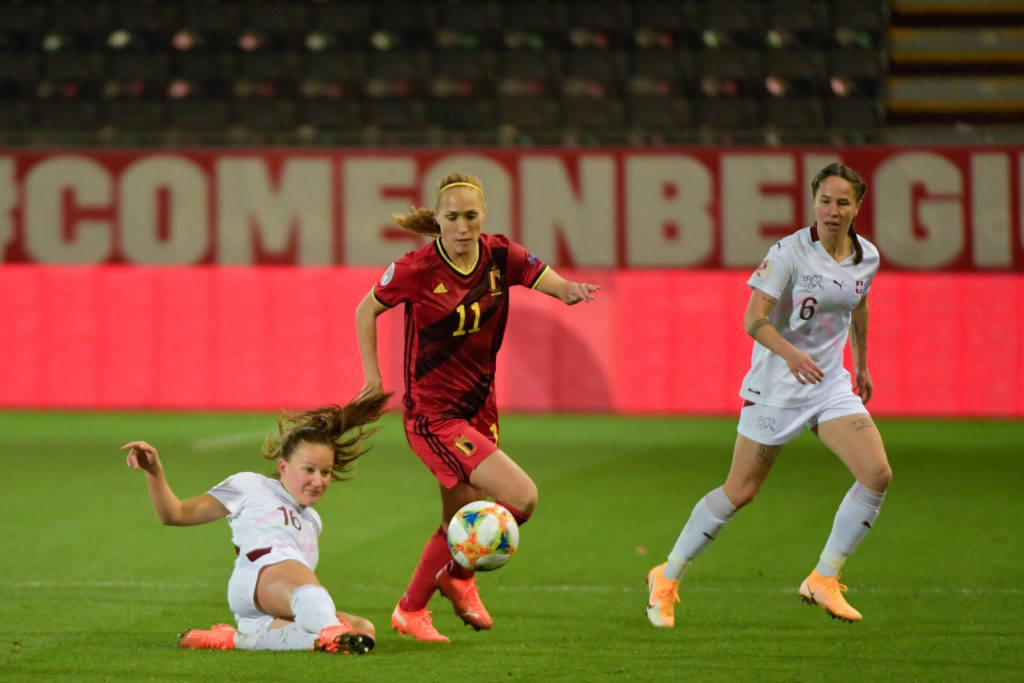 Here is the latest from qualifying for the Women’s European Championship, now scheduled for July 6-31, 2022, in England. We’ll start with England, who qualified automatically as hosts and will be welcoming Serina Weigman who will take over the side next September.

Here’s how the rest of the continent is shaking out following a weekend of qualifiers, with eight of nine group winners decided and one in the balance due to a COVID-19 delay. The nine group winners and three best runners-up join hosts England automatically from group play. The other six runners-up will face off in playoffs in April 2021 for the final three berths to the 2022 tournament.

The Netherlands, who are reigning European champions, have won the group to qualify, while Russia are the runners-up and will contest a two-leg playoff early in 2021 for one of the final spots. The Netherlands, who had already clinched the group, recovered from a poor showing in a friendly against the United States to pummel Kosovo, 6-0 behind a Katja Snoeijs hat trick. Russia won 3-0 over Kosovo and 2-1 at Turkey this window. Marina Fedorova scored twice against Kosovo, which locked up the playoff spot for Russia, and once more against Turkey. The Dutch were the dominant force in the group, winning all 10 matches by an aggregate 48-3. Their toughest matches were against Russia, 2-0 and 1-0 results.

Kosovo, Turkey, Slovenia, and Estonia have been eliminated. In the final match in the group next February, Estonia host Slovenia trying not to complete the double round-robin without a win. Their only point so far was a 0-0 draw in Turkey in October.

Denmark, runners up in 2017, have won the group to qualify. Italy have clinched second and could qualify without a playoff. Technically, Denmark wrapped up the group with Tuesday’s 0-0 draw to Italy, the first points they dropped in the competition. But in reality, Italy would have had to beat Denmark and then Israel in February while making up a goal difference of 27. More realistically, Italy can avoid a playoff and book accommodations to England if they can beat Israel by at least two goals and get some help from Portugal and Finland (there are other permutations that could get Italy in).

Eliminated in this group are: Bosnia and Herzegovina, Malta, Israel, and Georgia. Of note, Bosnia did not score in four combined losses to Denmark and Italy but won their other six matches. Georgia finished group play 0-10.

Northern Ireland fought off a stingy Belarus side last Friday and came back Tuesday to beat Faroe Islands, 5-1 to clinch second in the group and a playoff for a spot in the EUROs. Northern Ireland have never qualified for the European Championship. The Green and White Army had 1-0 and 2-1 leads against Belarus but were equalized on twice before finally winning 3-2 on an own goal.

Wales had an easier time with Belarus, winning 3-0 on Tuesday, but lost out to Northern Ireland on the cruelest of tiebreakers. The teams drew both matches, 2-2 in Wales and 0-0 in Northern Ireland. That sent Northern Ireland through to the playoff on away goals in the head-to-head. OL Reign midfielder Jess Fishlock scored Wales’ final goal against Belarus.

Norway had the group clinched and their match against Faroe Islands was cancelled and will not be played. Norway, European champions in 1987 and 1993, will play once more, against Belarus in February.

Wales, Belarus, and Faroe Islands are eliminated from Group C.

Spain and Czech Republic both pummeled Moldova last week to set up a dramatic final sequence of play in the group. Spain currently lead Czech Republic on an unassailable, head-to-head tiebreak and can win the group by winning away to Azerbaijan in February. Spain won that home leg, 4-0 in October 2019. Spain will then finish play against Poland at home in a game that was postponed last week due to COVID-19.

Poland will need to win the match to slip past Czech Republic and into a playoff (or win the group if Azerbaijan pulls the upset on Spain). Czech Republic are finished with their matches and will face a tense two months waiting for the result of the Spain-Poland contest.

Spain can do no worse than make a playoff and Czech Republic cannot win the group. The runner-up in this group will not have enough points to directly qualify.

The highlight of the February window figures to be Finland’s home match against Portugal, which will almost certainly decide Group E. If either side wins, it will take the group and a place in the EUROs. If the match is a draw it will depend on the final score and subsequent results when Finland play at Cyprus and Portugal travel to Scotland.

Assuming both Finland and Portugal win their other matches, the following criteria apply to a draw. A 0-0 draw will give Finland the group. A 2-2 draw or greater will give it to Portugal. In the event of a 1-1 draw, the goal-difference tiebreaker in the group will take effect. Finland currently have what looks to be a commanding edge of +9 over Portugal.

A Finland-Portugal draw would also mean the team that does not win the group would qualify direct with a victory in their final match. And Finland’s goal-difference edge makes them far more likely to qualify direct even if they lose to Portugal. Either way, both teams will play on after the February window in some capacity.

Scotland, Albania and Cyprus are eliminated. Cyprus have two matches left to try and secure a point.

Berglind Björg Þorvaldsdóttir’s 65th minute goal gave Iceland a 1-0 win at Hungary and a spot in next year’s EURO’s as one of the top three group runners-up. Sweden had clinched the group by beating Iceland 2-0 in October and they finished off an undefeated group phase with a 6-0 rout of Slovakia.

Slovakia, Hungary and Latvia were eliminated, with Latvia finishing with eight losses from eight matches. Group F play has concluded.

France’s 3-0 win over Austria on Friday clinched the group and a trip to England, a month to the day after Austria stayed alive with a 0-0 home draw against the French. Austria then moved to the brink of direct qualification with a 1-0 win over Serbia on Tuesday. Only a lopsided win by Italy and some very specific results between Portugal and Finland would send Austria to a playoff instead of directly to the final tournament.

Tine De Caigny scored twice before halftime to send Belgium on the way to a 4-0 win over Switzerland and the top spot in Group H. Both teams had already clinched at least a playoff, but the victory sealed direct qualification for Belgium. Switzerland still have a chance to qualify directly but can fall into a playoff if Italy win their match by at least two goals or Finland lose to Portugal and defeat Cyprus (a few other scenarios as well).

Romania, Croatia, and Lithuania are eliminated. Lithuania did not win a point. Group H play has concluded.

Nadiia Kunina’s goal pushed Ukraine past Montenegro, 2-1 and combined with Ireland’s 3-1 home loss to Germany, put Ukraine in a playoff next year as Group I runners-up. Ukraine went ahead 5 minutes in but Montenegro equalized a minute later. The match stayed that way until Kunina’s goal in the 74th minute.

Germany had already polished off the group and their 6-0 win over Greece and subsequent victory in Ireland were mere window dressings to complete a perfect group stage. Ireland’s goal, a first-half, stoppage-time penalty, was the only one Germany conceded while scoring 46.

Ireland, Greece, and Montenegro were eliminated. Montenegro did not earn a point and their equalizer in Ukraine was only their second goal in qualifying — both against Ukraine. Group I play has concluded.