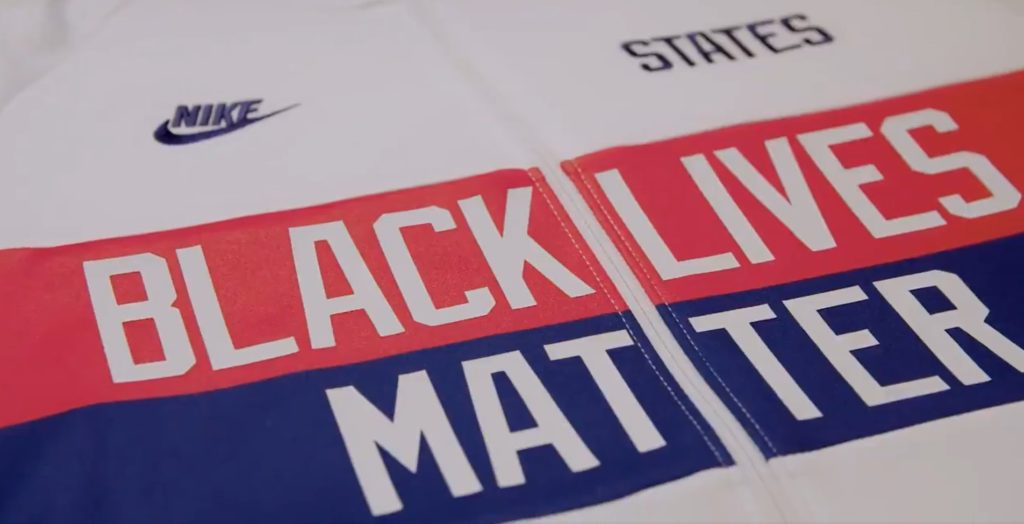 United States women’s national team players wore Black Lives Matter across the front of their warm-up shirts on Friday prior to their 2-0 victory over the Netherlands in Breda. The match was the first for the Americans since March 11, marking their first opportunity to show solidarity in U.S. uniforms since in over eight months.

Players had opportunities in other settings, including the significant platform of the National Women’s Soccer League Challenge Cup in June and July, when the NWSL was the first team sports league to return to action in the U.S. and had several games broadcast on national TV.

Friday’s platform was significant as well — with, ostensibly, the added figurative weight of representing the United States.

“Obviously, representing this national team is a complete honor and all the girls on the national team completely understand that,” U.S. defender Crystal Dunn said postgame. “And I think we just wanted to make a stand as a unified team and put out a statement, obviously, before the game, and use our right to exercise that expression as well, obviously, during the anthem.

“We had incredible conversations as a team during this camp. It was so incredible to get everybody together, and I think on this team, we’ve started that process of just getting involved in deeper conversations and starting to get to know each other on a deeper level. So, I’m truly proud of this group for coming together in a short camp and putting forward a powerful message and standing unified.”

U.S. players collectively posted a unified message to their social media channels prior to Friday’s game. Most of the team kneeled during the playing of the U.S. national anthem, and all players and staff appeared to wear the Black Lives Matter training jacket.

We wear Black Lives Matter to affirm human decency. This is not political, it’s a statement on human rights. pic.twitter.com/QHDAx4iv7k

The supportive and collaborative tone from the federation is a marked change from a few years ago. Megan Rapinoe, who was not with the U.S. for the game against the Netherlands, kneeled for the national anthem throughout the end of 2016, including in a U.S. jersey. Although she was still returning to full fitness from an injury at the time, her playing time was immediately reduced — something she detailed in her recently-released memoir —  and the federation even proceeded to create a bylaw in 2017 which forced all members representing U.S. Soccer in an official capacity to stand for the national anthem. U.S. Soccer repealed that bylaw earlier this year.

On Kristie Mewis, 2020 and appreciating the moment

On Kristie Mewis, 2020 and appreciating the moment
The Equalizer Podcast: USWNT vs. Netherlands recap