WoSo Around the World: Bayern knock off Wolfsburg 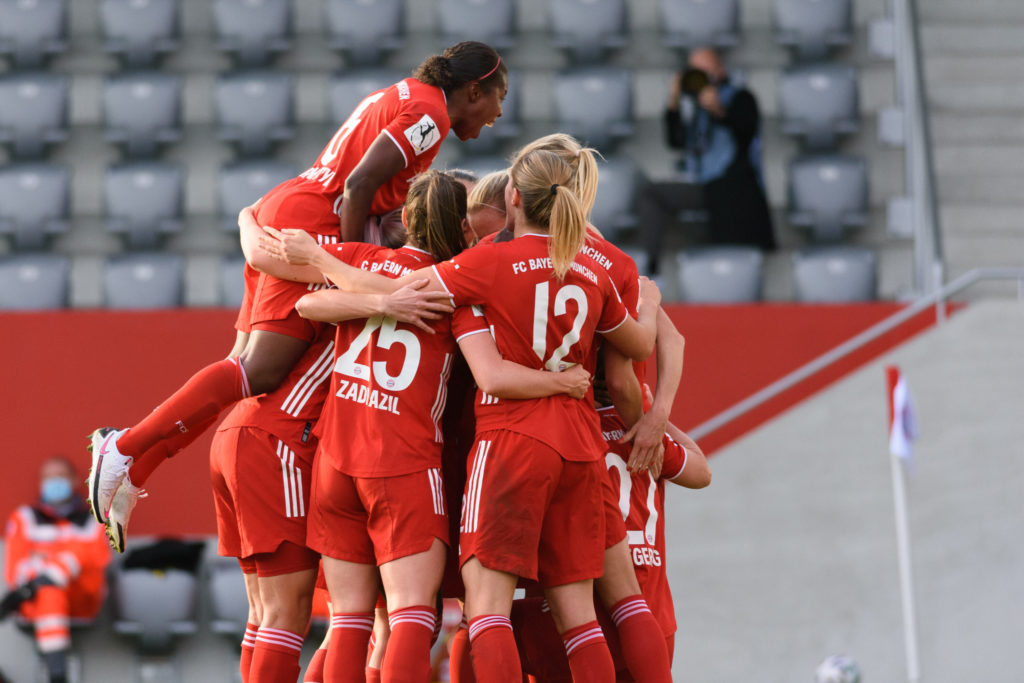 The Latest: Bayern Munich whipped Wolfsburg, 4-1, on Sunday to move five points clear in the title race. The top-of-the-table clash began tipping Bayern’s way on Viviane Asseyi’s 26th minute goal and went 2-0 to halftime thanks to a late strike from Marina Hegering. Lena Gosseling hit a penalty for Wolfsburg which was the first goal conceded all season by Bayern but it was not enough to seriously threaten the leaders. Elsewhere, Turbine Potsdam secured their hold on third place with a 1-0 win at Frankfurt and eight different players scored in Werder Bremen’s 5-3 victory over MSV Duisburg.

The Latest: Paris Saint-Germain showed no mercy against Issy on Sunday, sending 14 goals past Solene Froger. Former NWSL star Nadia Nadim netted six of the 14 goals. Kadidiatou Diani and Marie-Antoinette Katoto each had a brace. The result may have a comedic ring to it but it moved PSG to +35 for the season to +26 for Lyon, a differential that could be important if the sides wind up tied. Lyon conceded for the second time this season but had little trouble with Soyaux, winning 5-1. Bordeaux won 2-0 at Le Havre and moved into the third Champions League spot as Montpellier were surprised 1-0 at Dijon.

The Latest: An epic weekend saw Manchester United rally from 2-0 down at halftime to draw Manchester City 2-2 while Chelsea drew Arsenal 1-1 on a 90th minute own goal after going down in the 86th. Everton also drew Reading, 1-1, meaning the top five remains unchanged. The biggest losers in the sequence were City who remain five points off the pace and two points out of a Champions League position with two teams to get by. In Bristol, Ebony Salmon scored in the 90th minute to give Bristol City a 2-2 draw against Tottenham Hotspur and their first point of the season.

The Latest: Barcelona soundly defeated rivals Atletico Madrid, 3-0, Wednesday night to remain perfect on the season though a series of postponements has them third on the table. Granadilla Tenerife won twice on the week — 2-1 over Real Madrid and then 2-0 over Logrono — to move into the provisional top spot on the table. Tenerife have yet to play Barcelona and still host Atletico, who they drew earlier this season in Madrid. All three of those matches are set for 2021. Postponements have continued to create massive imbalance in the table. Tenerife, Atletico and Valencia are the only clubs to have played eight matches while Rayo Vallecano have played only three times.

Alex Morgan (Pride) made her first start for Tottenham Hotspur and played the first half. It was a rough day for her side though. Her substitute, Rianna Dean, was sent off in the 77th minute with Spurs leading Bristol City 2-1 and Bristol equalized in the 90th minute. Alanna Kennedy (Louisville) and Shelina Zadorsky (Pride) both played 90 for Spurs… Caitlin Foord (Louisville) went all the way and was a hearty presence for Arsenal in their 1-1 draw against Chelsea… Jess Fishlock (Reign) assisted Natasha Harding’s equalizer that gave Reading a 1-1 draw against Everton. Claire Emslie (Pride) went all the way for Everton… Tobin Heath (Louisville) scored a dagger of a goal to begin Manchester United’s come back against Manchester City. Christen Press (Louisville) started and played 55 minutes for United, seeing a yellow card. Sam Mewis (Courage) played all 90 minutes for City and was active early while Rose Lavelle (Reign) was an unused sub… Denise O’Sullivan (Courage) played 90 in Brighton & Hove Albion’s 1-0 win over West Ham United. Rachel Daly (Dash) and Emily Van Egmond (Pride) did the same for West Ham… Rachel Corsie started and finished Birmingham City’s 1-0 win over Aston Villa.

Taylor Korniek (Pride) scored her first goal for MSV Duisburg, the final goal in the team’s 5-3 loss to Werder Bremen… Meaghan Nally (Thorns) played 90 for Potsdam in their key, 1-0 win over Frankfurt.

Kayleigh Rhiel (Louisville) and Evelyne Viens (Sky Blue) both played 90 minutes in Paris FC’s 1-1 draw with Guingamp, but the pair are no longer NWSL teammates after Rhiel was selected by Louisville FC in the expansion draft… Celeste Boureille (Thorns) went all the way for Fleury 91 who defeated Stade de Reims, 2-1… Jodie Taylor (Reign) never got off the bench for Lyon in a 5-1 win over Soyaux. Celia Jiménez Delgado (Reign) has yet to dress.

Cece Kizer (Louisville) played for the first hour for Kolbotn IL who lost 2-0 to Roa and are now just a point ahead of that rival for the relegation zone.

Jade Moore (Pride) entered in the 61st minute to help finish off Atletico Madrid’s 4-1 win over Real Betis. During the week she started and played the first half in the 3-0 loss to Barcelona.

Ali Riley (Pride) saw the opening hour in Rosengard’s 1-0 loss to Vaxjo… Lindsay Agnew (Courage) played a majority of her 90 minutes on a yellow card for KIF Orebro, 1-0 losers to Pitea.. Emily Sonnett (Pride) subbed in after 15 minutes to replace retiring captain Emma Berglund. Goteborg prevailed 3-1 over Vittsjo but the goal conceded was a Sonnett own goal. Quinn (Reign) and Elizabeth Eddy (Sky Blue) both played the full match for Vittsjo… Rachel Hill (Red Stars) and Hallie Mace (Courage) accounted for all three goals as Hill’s Brace for Linkopings edged Mace and Kristianstads. Lauren Barnes (Reign) also played 90 for Kristianstads… With the weekend matches, the Swedish season has ended.

New additions join European-based players for USWNT game at Netherlands
Analyzed: The contrasting fortunes of Lavelle and Mewis at Man City — and how they could both fit on the field