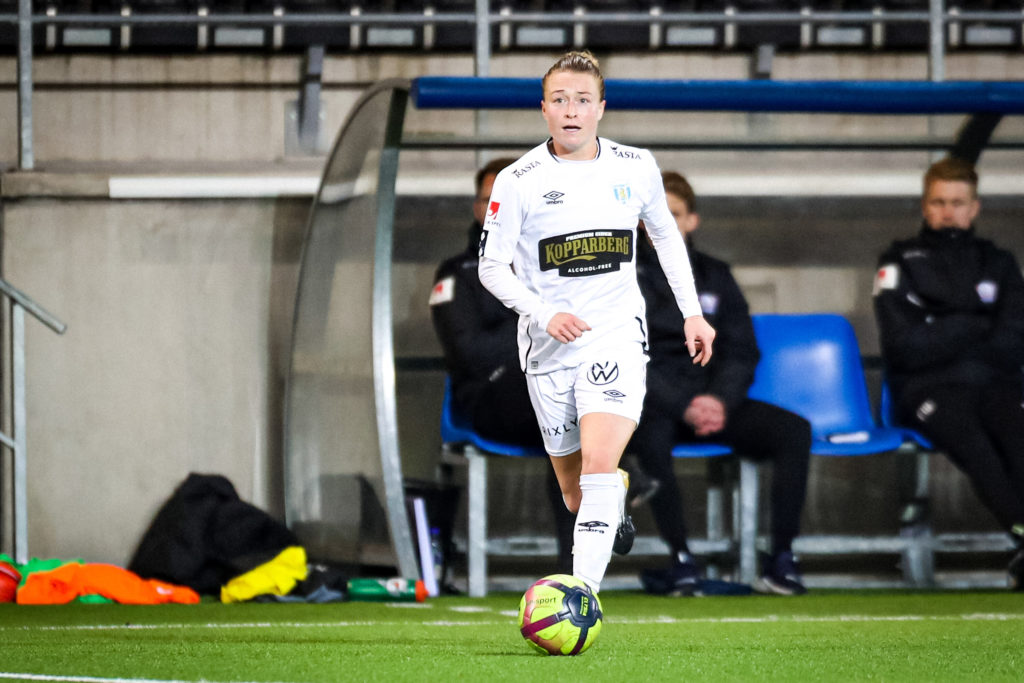 This past week in women’s soccer around the world, Emily Sonnett’s Göteborg FC claimed their first ever Damallsvenskan title. Over in Spain and England, there were changes to the top of the table, while Wolfsburg still trail closely behind Bayern Munich in Germany.

The Latest: Multiple postponements of matches scheduled for midweek and the weekend left the table quite unbalanced with Atletico Madrid moving to the top despite a disastrous weekend. After just squeaking by Eibar, 1-0 on Thursday, Atletico were held at home Sunday by Sporting de Huelva. The 0-0 draw against a Huelva side that had not registered a point all season gave Atletico 14 points and first place but only because Barcelona had both of their matches scrapped. Barca remain perfect through 4 matches while Atletico Madrid have now been held twice and are theoretically four points off the pace. The sides are scheduled to meet Wednesday night in Barcelona. Granadilla Tenerife won twice last week and sit second between the perennial top two. The worst week among the clubs that played belongs to Santa Teresa, losers 4-0 to Real Sociedad and 5-0 to Valencia.

The Latest: Manchester United scored their biggest win to date, a 1-0 win over Arsenal that sent them to the top of the table. Arsenal dropped points for the first time this season and are a point back. Chelsea are three back with a match in hand and have a sizeable edge on Man United in goal difference. The top four play heads-up this weekend. On Saturday, United host the Manchester Derby against Man City who are fourth after putting eight past Bristol City. Arsenal host Chelsea on Sunday.

Star signings signal intent, but a young, English core has Manchester United atop the FAWSL

The Latest: Bayern Munich defeated Meppen 3-0 to remain undefeated, untied, and unscored upon this season. In the battle for second, Wolfsburg marched into Potsdam and beat down Turbine 5-0 to move six points clear of second but remain two points off Bayern’s pace. Bayern and Wolfsburg will tussle this Sunday in Munich. In the Golden Boot race, Laura Freigang scored the final goal in Frankfurt’s 3-0 win at Duisburg. It was Freigang’s 10th goal this season, four better than Zsanett Jakabfi and Sydney Lohman.

Emily Sonnett (Pride) played all 90 minutes in Göteborg’s historic, 7-0 win over Linköping. With the win, Göteborg claimed their first Swedish title and a spot in the 2021-2022 Champions League. Rachel Hill (Pride) played 82 minutes for Linköping and drew a yellow card…Ali Riley (Pride) went 90 in Rosengård’s 3-0 whitewash of Piteå…Hallie Mace had bookend assists for Kristianstad who downed Uppsala 4-1. Lauren Barnes went 90 for the winners…Quinn (Reign) and Elizabeth Eddy (Sky Blue) both went all the way to help Vittsjö GIK overcome Örebro, 4-0. Lindsay Agnew (Courage) came on for the final 13 minutes representing Örebro.

Jess Fishlock (Reign) played two full matches for Reading. On the weekend she had the vision to help create her side’s goal in a 1-1 draw with Tottenham. Midweek, her side were easily handled by West Ham, 3-0 in Continental Cup action…Sam Mewis (Courage) played 45 minutes in the Continental Cup and 57 in the league match, both easy wins for Manchester City. Rose Lavelle (Reign) replaced Mewis in the Cup tie and had a goal and an assist. She played the last 23 minutes on the weekend…Alanna Kennedy (Pride) played the last 24 minutes and first 66 minutes respectively for Tottenham Hotspur. Her side lost a 2-0 Continental Cup decision to Chelsea and then drew Reading. Shelina Zadoesky (Pride) played the full 90 in both matches. Alex Morgan (Pride) made her Spurs debut on Sunday, playing the last 20 minutes in their draw against Reading…Emily van Egmond (Pride) and Rachel Daly (Dash) had a fruitful weekend for West Ham. Both scored in a 3-0 Cup win over Reading that could have been easier but for two penalties not converted. In the 2-1 league match over Birmingham, Daly assisted Kennedy on the winner…Tobin Heath (Thorns) played 78 minutes and Christen Press (Royals) played 71–both with strong matches–in Manchester United’s enormous 1-0 win over Arsenal…Denise O’Sullivan (Courage) played the full 90 for Brighton & Hove Albion, 2-0 losers to Aston Villa…Claire Emslie (Pride) played the full match for Everton, 0-4 to Chelsea, and was shown yellow…Rachel Corsie (Royals) played 90 for Birmingham City in a loss to West Ham. (The Equalizer’s full FAWSL week 6 recap can be found here.)

Taylor Korniek (Pride) went all the way in Duisburg’s 3-0 loss to Frankfurt…Meaghan Nally (Thorns) played the first 80 for Turbine Potsdam who were humbled at home 5-0 by Wolfsburg.

Gunny Jonsdottir (Royals) scored in the 8th minute to set Valur on their way to a 3-0 Champions League win over HJK. Valur will next face Glasgow City on November 18.

Nahomi Kawasumi (Sky Blue) was a stoppage-time sub for INAC Kobe in their 2-1 win over Nojima Stella…Yuki Nagasato (Louisville) was on for the final 10 minutes playing for men’s side Hayabusa Eleven. They were 4-1 winners against Hasse FC.

CeCe Kizer (Dash) was an unused sub for Kolbotn IL who played Lillestrom to a 1-1 draw.

Jade Moore (Pride) saw partial action in two Atletico Madrid matches. She was a 75th minute sub and later saw a yellow card in the midweek win over Eibar and played the first 58 in the 0-0 draw with Sporting de Huelva on the weekend.