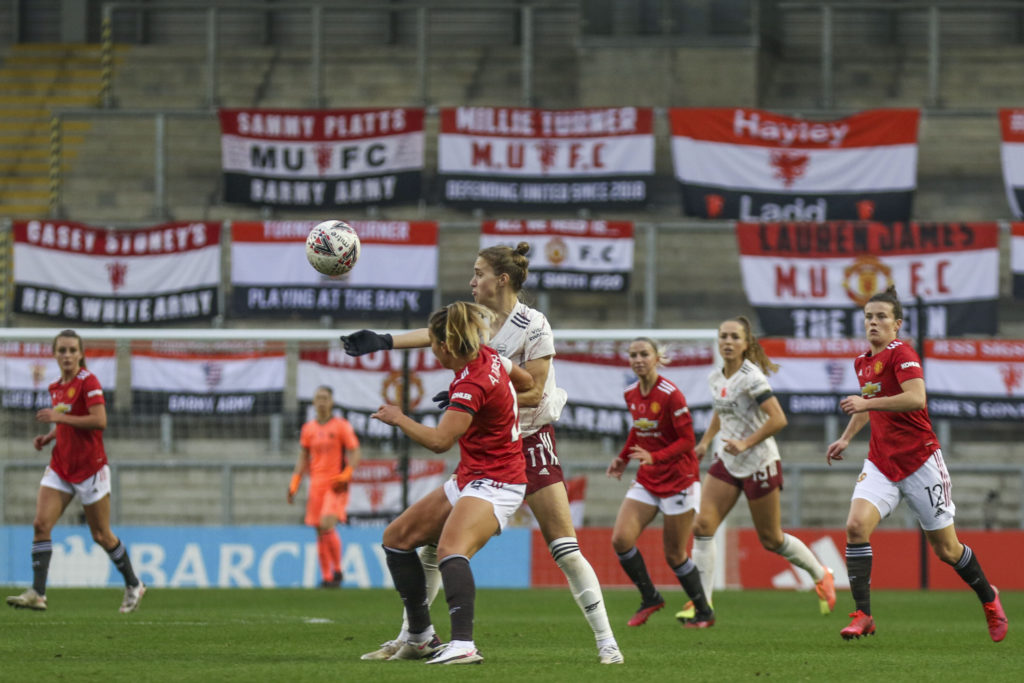 FA Women’s Super League action resumed this weekend after three weeks off due to an international break, last Sunday’s FA Cup Final and midweek Continental League Cup matches. After a hard fought win, Manchester United bypassed Arsenal at the top of the table. Meanwhile, Alex Morgan finally debuted for Tottenham Hotspur, who will be looking for her help in the coming weeks to escape the bottom end of the table.

Saturday’s 1-1 draw between Tottenham and Reading started as an end-to-end affair, with both teams getting on the scoresheet early courtesy of first half headers.

Morgan came on in the 70th minute, making her debut with Spurs after picking up a small injury in training a few weeks ago that delayed her return to the pitch. Morgan got a few touches on the ball in the remaining 20 minutes of the match, but nothing close to goal.

She comes on with 20 minutes to go against Reading.

After the early goals, both sides were disciplined defensively and hard to break down, but Reading had the best chance to steal the win in the 91st minute. Lily Woodham found herself in behind Spurs defenders with the ball and her shot forced a diving save by Spurs keeper Rebecca Spencer, sealing the draw.

However, the day was not without controversy, as Bristol City sent out a pre-match statement explaining that the FA denied the team their request to postpone the match after five first-team players were forced to quarantine at home due to COVID protocols. Without a postponement, Bristol had to call up players from their academy to fill the squad.

Despite an early goal by Chelsea’s Ji so-Yun, Everton were able to keep things closer than a 4-0 scoreline suggests for much of the match on Sunday.

Everton’s Hayley Raso, who has fit in quite well with her new side since her debut in September, almost leveled the score in the 67th minute when she volleyed a cross towards goal that had to be cleared off the line by a defender.

But after Raso’s chance, the floodgates opened on the other end for Chelsea. Bethany England scored two goals in quick succession, a low shot in the 73rd minute and a header just three minutes later. Pernille Harder added a fourth goal deep into stoppage time with a cool upper-90 finish that deserves a watch or two.

Of note for Canadian fans is more playing time lately for Jessie Fleming, who saw 15 minutes on the pitch on Sunday and half an hour in Chelsea’s mid-week cup match against Tottenham. Fleming didn’t see the pitch much in September and October, but a recent injury to Fran Kirby may mean more playing time for the Canadian. Regarding Fleming, Chelsea coach Emma Hayes said, “Jessie Fleming the last few weeks is really finding the levels, she’s adapting physically to the game.”

With the win, Chelsea remain undefeated this season and sit tied for third place (with a game in hand).

Aston Villa defeated Brighton 2-0 on Sunday for their first ever win in the Women’s Super League. Second-half goals by former England international Anita Asante and Ramona Petzelberger sealed the historic win for the newly promoted side.

A sweet touch by @Ramona__Ramirez and Villa look set to be heading for all three points 🙌#BarclaysFAWSL pic.twitter.com/72LQ0Cg4eB

It was an especially impressive win for Villa, considering they have not played in over a month after having two WSL matches postponed due to a positive COVID case in the squad.

West Ham came from behind against Birmingham on Sunday to earn their first win of the WSL season.

In the 9th minute, after a short break on the pitch for an injured player, Birmingham caught West Ham defenders out of position with a long ball. Claudia Walker ran onto the ball in behind West Ham’s back line and gave Birmingham the lead with a perfect finish.

But West Ham settled into the game, and were able to pull one back before half-time. Awarded with a free kick on the edge of the area, Rachel Daly decided to pass to Adriana Leon instead of go for goal herself, and Leon sent in a cross that was mistakenly headed by Walker into her own net.

The deadlock prevailed until the 73rd minute. Daly sent-in a superbly weighted long ball to Emily Van Egmond, who got up and over Birmingham’s defenders to head it past keeper Hannah Hampton.

While Daly plays striker for the Houston Dash, she has often been deployed at right-back for England under Phil Neville, and West Ham coach Matt Beard decided to play her in that position on Sunday.

Of the decision, Beard said, “We put Rachel at right-back today. It was something we’d spoken about and tried in training; with that deep delivery she can provide and then Emily has made a great third player run and got the finish. The pleasing thing is we’ve seen the game out and got that win.”

Manchester United defeated Arsenal 1-0 on Sunday to bypass them into the top spot in the standings.

After the initial 20 minutes of the match, where neither team had any clear cut chances, the momentum swung completely in United’s direction, as they took control of the match and created quality chance after chance.

In the 22nd minute, Tobin Heath was able to flick a ball forward to Christen Press in the box, who turned and volleyed it just over the bar. Just minutes later, Press received the ball to her feat outside the six yard box, and was able to create space around her defender Leah Williamson. Press’ shot forced a kick save from Arsenal keeper Manuela Zinsberger.

And this chance too from Press, forcing a kick save by Zinsberger! pic.twitter.com/4CLntZn2gG

While Arsenal did see more of the ball after the half-time break, United kept the pressure on and found their well deserved breakthrough in the 83rd minute. A superb run and pass from Jess Sigsworth set-up Ella Toone in front of goal, whose shot hit off the post and into the back of the net. The loss was Arsenal’s first real test of the season, who had up to this point been busy collecting goals against teams in the lower half of the table.

It's homegrown @ellatoone99 with a lovely finish!

Look at what it means ❤️

Finally @ManUtdWomen make the pressure pay, but can they hold on?

Before the match, United announced that striker Alessia Russo, who has had a standout start to the season, suffered a hamstring injury in pre-match training on Friday. It is a long-term injury that will require surgery in the coming days. On the other hand, Kim Little and Jill Roord returned from injury for Arsenal and came off the bench in the 2nd half.

Next weekend is Women’s Football Weekend in England, with all kick-off times staggered so there will be no overlap between matches.