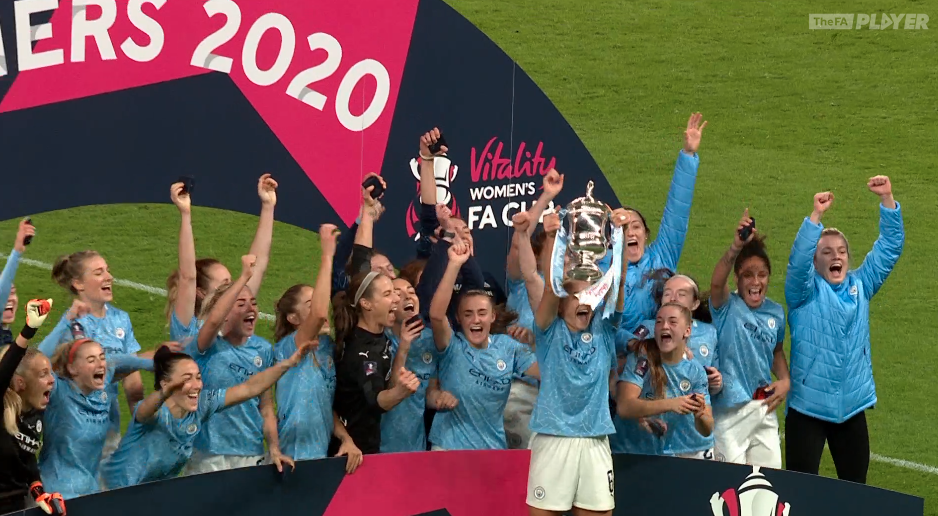 Samantha Mewis opened the scoring for Manchester City in the 39th minute, when she broke free of her defenders and was able to get her head on a corner kick, re-directing it into the back of the net.

And just ten minutes after the half-time break, City almost added a second. Caroline Weir’s shot-cross hit the post, and the rebound fell to Chloe Kelly. But Everton keeper Sandy MacIver was miraculously able to get across goal and get a touch to Kelly’s close-range shot, sending it over the bar and keeping her team in the match.

HUGE SAVE by Sandy MacIver to deny City a second! pic.twitter.com/jAftq6X7el

But Everton were able to generate a number of quality chances of their own in the second half, and in the 60th minute they found their equalizer.

Valérie Gauvin, who looked to sustain an injury before halftime but was able to stay on the field, got just enough of the back of her head on a corner kick, directing it past City keeper Ellie Roebuck.

Gauvin had a chance to bury a winner just minutes later, but her diving header went just wide of goal.

In stoppage time, City had a trio of chances in front of goal of their own, including a curling shot by Caroline Weir that hit the crossbar. The ball stayed out of the net at both ends, and extra-time was needed in this one.

MacIver kept Everton in the match in the 30-minute extra-time period, when she produced a fantastic, diving save to deny a header by City.

Here's the HUGE save from MacIver! pic.twitter.com/OHY6lckcHl

But City kept the pressure on and found the breakthrough shortly after, when substitue Jess Park danced through the Everton back-line and delivered a beautiful pass to Georgia Stanway. Stanway poked the ball past MacIver for the winning goal.

AND THERE IT IS! GOAL @ManCityWomen!

Jess Park delivers a perfect pass to Georgia Stanway, who buries it past MacIver! pic.twitter.com/mYJ16Ppvjc

Janine Beckie would add a third and final goal for City just before the final whistle, ensuring the 3-1 win over Everton.