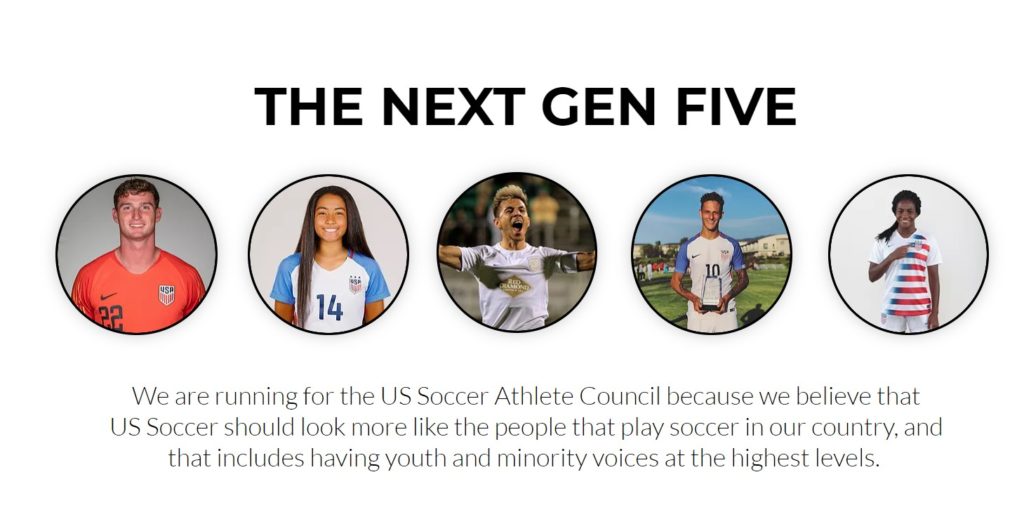 November is election season in the U.S. Soccer world, too. Voting for the U.S. Soccer Athletes’ Council will take place from Nov. 5-18 with 10 positions on the 20-member council up for grabs, and a group of five young athletes who call themselves Next Gen United hope to have a seat at the table.

University of North Carolina women’s soccer player Brianna Pinto and Harvard women’s soccer player Smith Hunter – both of whom are U.S. youth internationals – are joined by Paralympic national team member Nick Mayhugh, Birmingham Legion’s Mikey Lopez and the Philadelphia Union’s Matt Freese on a platform they launched last week. Any of them would be the youngest on the council if elected.

Their collective position is that change is needed in U.S. Soccer, and the next generation of U.S. players – for all senior and extended national teams – needs a seat at the table to help shape the sport’s future. The five players are united in their beliefs and have said that if any one of them were to be elected, they would carry out their shared principles of access, diversity, inclusion, community, support and unity. The group detailed their pillars on a website they created.

Each of the five candidates has their own personal story of ways they’ve seen a need for greater diversity and inclusion in the decision-making processes within U.S. Soccer. “We believe that US Soccer should look more like the people that play soccer in our country, and that includes having youth and minority voices at the highest levels,” the statement on their website’s homepage reads. Their first guiding principle is that “soccer is for everyone”:

“The Federation must work to dismantle the barriers that have historically prevented women, minorities, low-income kids, people with disabilities, and immigrant communities from being a full part of the U.S. Soccer family.”

Voting is conducted exclusively by U.S. Soccer “athletes” – those who have played in or been rostered for specific qualifying events, including World Cups, Olympics and qualifiers for each – in addition to the Paralympics, Copa America, Gold Cup or Pan American games – within the past 10 years. It will be conducted electronically this year.

Below, 18-year-old Smith Hunter shares her story of growing up in the Seattle area. These are her words:

Unfortunately, race and class are still pernicious factors within Washington Youth Soccer, and I feel that I am extremely fortunate to have made it through the system. Early on, my father had been informed by a well-known coach in Washington state that there was a pact in the region that seemed to exclude girls based on race. I have three other siblings who play soccer as well, and we still experience challenges while living in a single-income household. Class plays a strong factor in the soccer system; we were unable to access private technical trainings like many of our other teammates had.

During my youth playing career, I was a part of a local club called Seattle United. I am grateful for all of the support they have provided to my family and I throughout my young developmental journey, as they had a great scholarship program for other players like my siblings and I. My team won many state championships and other smaller tournaments. As we approached the end of our U-13 cycle, all of my teammates were thinking about transferring to another club that offered ECNL. At the time, this league was considered the most competitive in the nation, and many knew that it was the pathway to being scouted for university level soccer and U.S. Youth National team camps. A majority of the girls on the team that year decided to try out for the club after our state championship victory.

We all showed up to the try-out that day excited to possibly start a new chapter in our soccer journeys. Leaving the field that day, I felt confident that I had shown my best performance to the coaching staff. However, I was still young and naïve. Everyone knew that the roster was predetermined before we had even stepped onto the pitch. I was overlooked because finances, race, and soccer politics became a strong factor in the selection of the final squad.

I recall receiving the call that I had not made the team, and bursting out of the car in a grocery store parking lot to sob in my father’s arms that night. That moment was so painful because I knew that the final decision was ultimately out of my control. After drying my last tears, I clearly remember my father telling me to take it as an opportunity to focus on developing that year because other opportunities would arise in the future. He was right — miraculously, Seattle Reign Academy ECNL was created the following year in affiliation with Seattle United. I have stayed with the club since its establishment in 2016.

I did not truly gain exposure from U.S. Soccer scouts until I started playing in matches outside of Washington state, as I was excluded from that specific club and monthly US Club Soccer player identification trainings. Following the year that I was not able to make the team, I focused on improving my technical and tactical weaknesses in order to make the roster for the Olympic Development Program (ODP) state team. From there, I was scouted to join the ODP regional team, and was also invited to regional and national ODP camps.

To my surprise, I was fortunate enough to have Brandi Chastain as a coach for the ODP Regional team. She had a major impact in my tactical understanding of the game and my experiences as a player who was motivated to seize the opportunity to play at a competitive level outside of state. She played a crucial role in shaping my mentality during this part of my developmental journey, as she encouraged me to be confident in my abilities and show my strengths on the pitch everyday.

Behind the scenes, before these ODP tournaments and camps, I would always have to find ways to fundraise to pay the necessary fees. I did everything from selling water bottles on the Seattle waterfront to selling boxes of cookies in Pike Place Market. Although we received support from Seattle United, every winter, my siblings and I sold many raffle tickets in front of a Starbucks to give back to the financial aid program. One year, we broke the club record and sold around $10,000 worth of tickets for the program.

I have been fortunate enough to raise enough money to pay the costs and attend the events with the support of many people, whom I am very grateful for. If I had not raised enough funds to attend these tournaments, I ultimately would not have been scouted for the youth national team programs. That being said, I cannot imagine the amount of talent that is out there in the United States waiting to be found. Finances remain a barrier for many young players like myself and their families, and I strongly believe that this should no longer be an obstacle for any player in the United States.

In order to produce the very best talent, U.S. Soccer needs to reach every corner of the country to provide playing opportunities to those who cannot otherwise afford them. That being said, by expanding access for low-income players, U.S. Soccer can expand its player pool at every level while reducing the impact of economic disparities on athletic outcomes.

I also strongly believe that there are currently not enough people of color at the highest levels. Young athletes really need to be seeing people that look like them in positions of influence to show that their dreams are attainable, and that they understand some of the experiences they may face on and off the pitch. I have personally experienced the impact of having a person of color or a female as a coach. I have had Zahra Lechak, who was former US Development academy regional director, Katiana Khosrowyar, former Iranian women’s national team coach, and Jodi Washington, former coach of the San Jose Earthquakes youth club.

It was inspiring throughout my developmental journey to have people in that position who looked like me, and who had the same dreams as a footballer. Specifically, it was a blessing to have Brandi Chastain, a U.S. Soccer icon, as a role model and share words of encouragement with me. Seeing females and people of color accomplishing their goals at the highest levels, even in environments where they were a minority, allowed me to see that my dreams were really attainable. That’s why I think that it’s essential that we bring more diverse leadership across the soccer landscape. This will put U.S. Soccer in a stronger position to provide more role models for the next generation of diverse soccer players in our country.

Finally, I believe that there should be more opportunities for girls of color within U.S. Soccer’s youth national team programming. Personally, it was demoralizing to face racial and financial barriers throughout my youth playing career. That being said, I think that more girls from similar backgrounds to mine should have access to high level opportunities, as it will boost their morale in the face of challenges outside of their control, and ultimately show them that their athletic aspirations are attainable.