WoSo Around the World: NWSL players load up on goals, Nagasato plays with the men 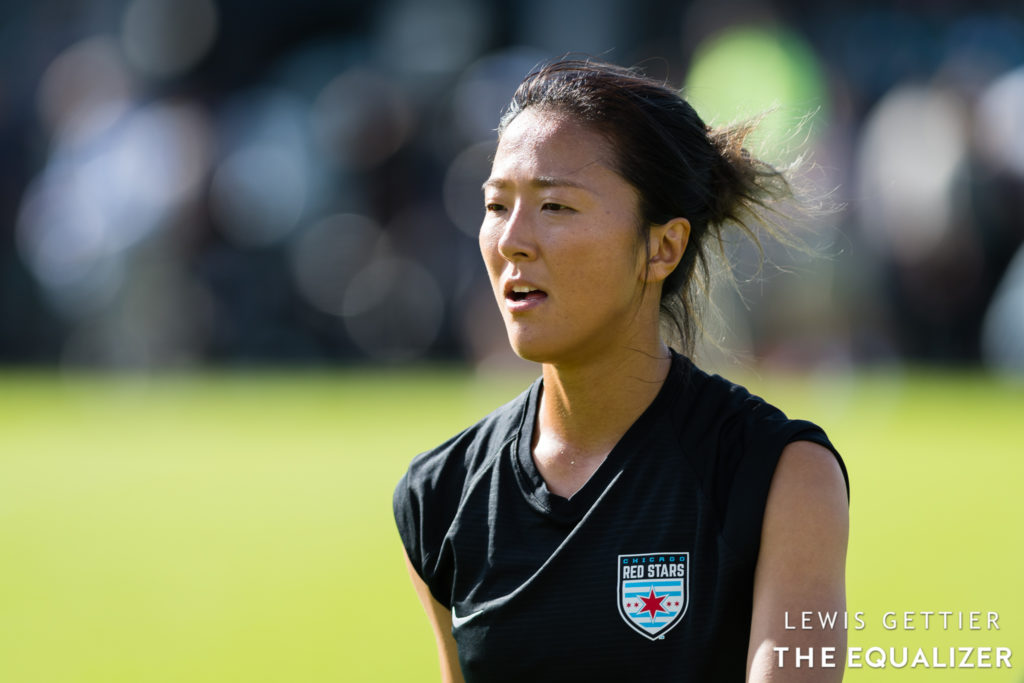 This week, multiple NWSL players got on the scoresheet for their clubs around the world, Real Madrid came up with their first win as a club, and Yuki Nagasato played for the first time for a men’s side in Japan.

The Latest: Tobin Heath and Christen Press both scored their first goals for Manchester United who knocked off a pesky West Ham United, 4-2. Meanwhile, Everton were knocked off the unbeaten/untied perch when they drew Brighton 2-2 at home. Everton had conceded only once and Brighton had only scored twice coming into the match. The dropped points put Everton two back of Arsenal who rolled Tottenham 6-1 behind a Vivianne Miedema hat trick. Aston Villa and Chelsea were postponed due to COVID. For more, check out Emily Dulhanty’s full WSL recap for the weekend.

The Latest: Athletic Club dropped points for the first time this season when Oriana Altuve scored in stoppage time for Real Betis to earn a 2-2 draw. The result leaves Barcelona alone on 9 points after six different players scored in a 6-0 thumping of Sporting de Huelva, now on the bottom of the table. Real Sociedad remain unbeaten, though with 6 points from 2 games. Sociedad had to rally from 2-1 down to Levante in the final 15. Cecilia Marcos hit the winner in the 90th minute. In Madrid, the first win for the Real Madrid brand came 3-1 at the expense of Rayo Vallecano who were finally on the field after having their first two matches postponed. Huelva’s drop to the bottom came after Logrono drew Sevilla 0-0 for their first point of the season. Logrono remain in the drop zone though as the bottom four will all be demoted at season’s end. Along with Huela and Vallecano, Deportivo de La Coruna are also on 0 points.

The Latest: Werder Bremen, the only side without a point at this time a week ago, won two times to move off the bottom and out of the relegation zone. On Wednesday they edged Meppen 2-1 in a makeup match, and came back Sunday to drop SC Sand, 1-0 on an 80th minute goal by Jana Radosavljevic. At the top of the table, Bayern Munich rolled over Turbine Potsdam, 3-0 to stay perfect while Wolfsburg stayed two points off the pace with a 5-2 win over Duisburg. The league returns November 6 and the first Bayern-Wolfsburg clash is a week later.

The Latest: Issy won for the first time since being promoted, 3-1 over Bordeaux. Trailing near the half, Issy got a goal from Laurie Teinturier two minutes into stoppage time to send the teams to the break level. Teinturier struck again in the 63rd minute for the decisive goal. Despite the win, Issy remain at the bottom on goal difference from Guingamp. That side was the latest to feel the wrath of Lyon, losing 4-0. Lyon remain perfect, two points clear of Paris Saint-Germain, 3-0 winners at Soyaux. The first meeting between the rivals is November 21 in Paris.

Tobin Heath (Thorns) started for Manchester United and scored from a difficult angle at the 23rd minute. She was subbed out around the hour mark, while Christen Press (Royals) checked in in the 77th minute. In the 87th, Press added the icing goal in a 4-2 away win over West Ham United. It was the first goals for both in Manchester United kits. NWSL players accounted for West Ham’s goals as well. Emily Van Egmond (Pride) played the full 90 and scored in the 39th on a back-post header. Rachel Daly (Dash) also played the full game and tallied in the 83rd minute to make Man U sweat just a bit. Both Van Egmond and Daly saw yellow cards…Sam Mewis (Courage) went the distance for Manchester City and scored the equalizer in a 1-1 draw against Reading. Rose Lavelle (Reign) also went the distance, her first 90-minute run since arriving in England. Jess Fishlock (Reign) played all 90 for Reading…Denise O’Sullivan (Courage) played the full match for Brighton & Hove Albion, helping them pull out a surprise 2-2 draw with Everton. Claire Emslie (Pride) started and went 63 minutes for Everton…Alanna Kennedy (Pride) and Shelina Zadorsky (Pride) both started in Tottenham’s 6-1 beatdown at the hands of Arsenal. Kennedy came off in stoppage time while Zadorsky went all the way. Alex Morgan (Pride) has still yet to suit up…Rachel Corsie (Royals) opened the scoring for Birmingham City (d. Bristol City, 4-0) and also took a yellow card for interfering with goalkeeper distribution. She played all 90.

Machaela George (Reign) watched as an unused sub as her side Fortuna Hjorring A/S defeated AaB, 4-1.

Makenzy Doniak (Red Stars) scored the first of three goals for HB Køge with a low, hard shot from outside the 18. Unfortunately the goals were only enough for a 3-3 draw against KoldingQ. Emily Boyd (Red Stars) will not play again this season after suffering a torn ACL and MCL.

Celeste Boureille (Thorns) scored the equalizer for Fleury 91 to earn a 1-1 draw against Paris FC. Evelyne Viens (Sky Blue) played the first 70 for Paris and Kayleigh Riehl (Sky Blue) never got off the bench…Darian Jenkins (Reign) was one of three Bordeaux players to miss the weekend due to positive COVID-19 tests…Neither Jodie Taylor (Reign) not Celia Jimenez Delgado (Reign) were on the team sheet for Lyon.

Lindsay Agnew (Courage) played 90 minutes for KIF Örebro who drew Göteborg 1-1 on a goal from former Spirit player Cali Farquharson. Emily Sonnett (Pride) went the full 90 for Göteborg…Rachel Hill (Red Stars) subbed in for the final 12 plus stoppage in Linköpings FC’s 3-0 win over Djurgarden…Elizabeth Eddy (Sky Blue) played 90 minutes for Vittsjö, but Quinn (Reign) was not in the 18 for a 1-1 draw against Rosengård. Ali Riley (Pride) started and played 65 minutes for Rosengård…Hallie Mace (Courage) scored twice in rapid succession and Lauren Barnes (Reign) also started for Kristianstads DFF in a 4-0 victory over UMEA in a match pushed to Monday due to snow.

Camila (Pride) scored in the 26th minute to ignite SE Palmeiras back from two down after 10 minutes to draw 2-2 with Iranduba. Camila played 72 minutes in the midweek tilt.

CeCe Kizer (Dash) hit the equalizer for Kolbotn IL to salvage a 2-2 draw with Klepp. Nikki Stanton featured for Klepp.

Kayla Sharples (Red Stars) scored 2 minutes in for Kuopion Palloseura and they were on their way to a 4-1 romp of PK-35 Helsinki.

Neither Carson Pickett (Pride) nor Cassie Miller (Red Stars) were on the team sheet for Appollon Ladies FC.

Nahomi Kawasumi (Sky Blue) was an unused sub at INAC Kobe…And Yuki Nagasato (Red Stars) debuted for men’s side Hayabusa Eleven, entering in the 85th minute of a 3-1 victory.