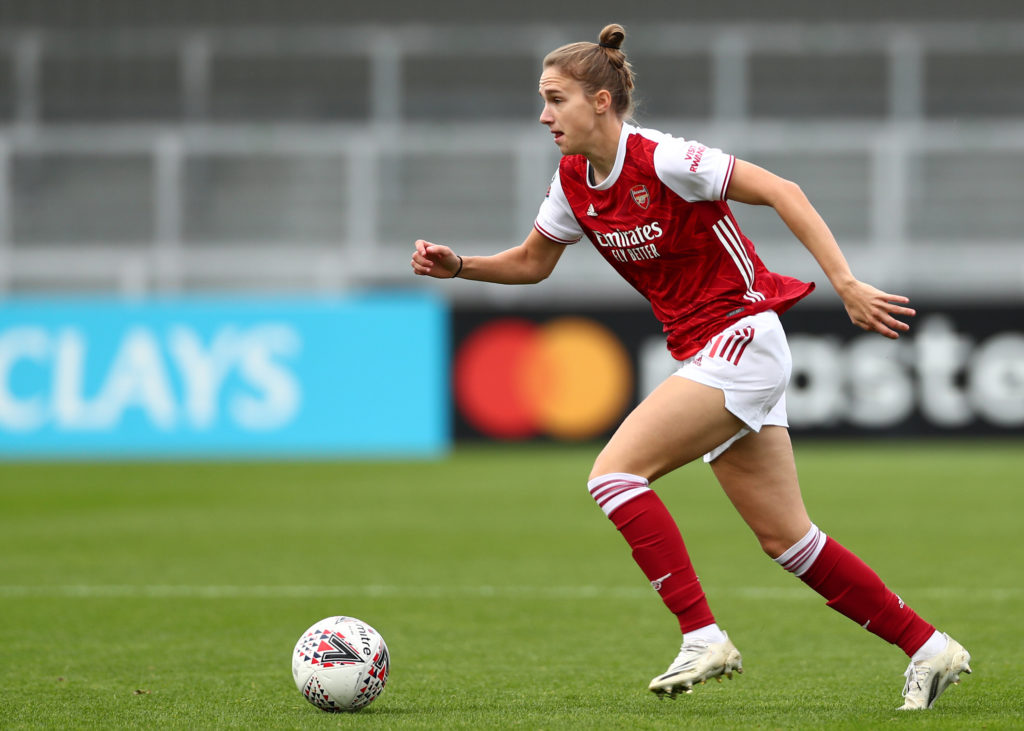 Due to a confirmed positive COVID case in Aston Villa’s squad, their match against Chelsea was postponed. Let’s take a look at how Sunday’s action played out:

Manchester United got off to a quick start on Sunday against West Ham, as they lead 3-1 at the half-time break through a brace from Alessia Russo and Tobin Heath’s first goal in a United shirt. Russo, who has been called up for England’s latest national team squad, assisted on Heath’s goal and has had a fantastic start to the WSL season (three goals and two assists in four matches) after returning to England from the University of North Carolina, where she played DI soccer for three years.

Though Man United had most of the run of play in the first half, West Ham’s goal by Orlando Pride loanee Emily van Egmond gave them a sliver of hope.

And the second half was a much more even affair, with West Ham offering some attacking presence that was lacking through most of the first half. Rachel Daly scored her first goal for West Ham in the 82nd minute, a cross that turned into a lob shot when it was misjudged by United keeper Mary Earps. But just as it looked like West Ham might challenge for the equalizer, Christen Press, who was brought on as a second half substitute, sent a beautiful volley into the back of the net just minutes later to restore United’s two-goal lead.

The win kept Manchester United’s unbeaten streak alive, and they sit 3rd in the table with 13 points, but a much harder test against Arsenal lies ahead when the WSL resumes in November.

After a thorough 3-1 loss to Chelsea last weekend, Manchester City dropped points again on Sunday with a 1-1 draw against Reading.

Reading shocked City with an opening goal in the 4th minute, when a corner kick whipped in by Brooke Chaplen was flicked into the back of the net, off the head of Amalie Eikeland.

A number of City players had chances to equalize in the first half, including a fantastic opportunity in the 12th minute that saw Reading keeper Grace Moloney make a point-blank save on an Ellen White shot. In the ensuing scramble, Georgia Stanway’s shot was saved off the line by defender Deanna Cooper, and Sam Mewis had a chance on the next rebound, but it was again saved by Moloney and was sent out for a corner.

City did eventually break through in the 56th minute, when Mewis drove towards the 18 with the ball and unleashed a perfectly placed shot that beat Moloney.

City knocked on the door to no avail in the remaining half-hour of the match, most notably through shots that just missed the target by Chloe Kelly and Rose Lavelle (who started and played the full 90). Jessica Fishlock, on loan from OL Reign, put in a full 90 minute shift in the midfield for Reading.

With the number of quality chances City creates, you’d think it’s just a matter of time before the ball starts to find the back of the net more often. But with City trailing Arsenal by seven points in the table already, fans will be hoping the goals come sooner rather than later.

Fans looking forward to a close North London Derby were disappointed when Arsenal went 2-0 up on Tottenham within the first seven minutes of Sunday’s match. Ireland captain Katie McCabe opened the scoring in the 4th minute, with a beautiful free kick that you need to watch a few dozen times:

Oh my! 🇮🇪 @Katie_McCabe11 with the beautiful free kick! 😱

Just a few minutes later, Miedema broke the FAWSL’s all time scoring record, with her 50th goal in just 50 matches. She would add two more throughout the match to complete the hat-trick, and now sits ahead of Nikita Paris (49 goals) and Ellen White (48 goals) on the scoring leaderboard with 52 goals. At just 24 years old, that’s a staggering statistic for Miedema, and bodes nicely for the Dutch ahead of the 1-2-3 punch of the Olympics in 2021 (hopefully), Euros in 2022, and World Cup in 2023.

Caitlin Foord rounded out the scoring for Arsenal with a brace of her own, solidifying her own fantastic start to the new fall campaign (four goals and five assists in Arsenal’s last eight matches in all competitions).

SHE'S DONE IT!@VivianneMiedema gets her 50th #BarclaysFAWSL to make it 2-0 to @ArsenalWFC! 🥇 pic.twitter.com/P7fi6BdoI8

Arsenal sit atop the table with a perfect 15 points from five matches, made all the more impressive considering a number of players are nursing injuries (including captain Kim Little). Arseblog reported that the team is conducting an internal review of training and match loads due to the non-contact nature of most of the injuries.

Alex Morgan was not available for Spurs on Sunday. She took to Twitter to explain her absence: “A small setback keeping me from doing what I love. Can’t wait to get on the field with this team in the next few weeks. Literally can’t wait.” Her Orlando Pride teammates Alanna Kennedy and Shelina Zadorsky both played in the Spurs backline for the derby match.

Everton kept up their unbeaten run in the WSL on Sunday but dropped points with a 2-2 draw against Brighton. A free-kick from Izzy Christiansen and a header by Valerie Gauvin provided the goals for Everton, while an own goal by Everton gave Brighton their first goal, and Aileen Whelan provided the second-half equalizer.

The final ten minutes of the match were played under very odd circumstances, as it looked like Brighton midfielder Kayleigh Green was shown a second yellow card in the 81st minute, but after a short chat between player and referee, she was not sent off the field. Everton manager Willie Kirk did not mince words when talking about the mistake and it’s impact post-match:

Very strange incident in the Everton Women-Brighton Women game today where it appeared Kayleigh Green had been shown a second yellow card but wasn’t sent off. I asked #EFC boss Willie Kirk about it afterwards. Here’s what he said: pic.twitter.com/jyJoBUbBfS

That’s two draws now for Brighton against top WSL teams, as the Seagulls previously battled Manchester City to a scoreless draw in September. They sit in 8th with five points, while Everton are in 2nd with 13 points.

Birmingham City sailed to a convincing 4-0 win over Bristol City on Sunday, courtesy of goals by four different goalscorers. Scotland captain Rachel Corsie, on loan from the Utah Royals, opened the scoring for Birmingham with a well-directed header.

After five games played, Birmingham sit in 7th place in the standings with 6 points, while Bristol City sit at the bottom of the table with no points from four matches.

The next WSL matches will be played on the weekend of Nov. 7 and 8 due to the upcoming international break, as well as the FA Cup Final on Nov. 1, and Continental Cup matches on Nov. 3, 4, and 5.

Reign defeat Royals 2-0 in final Fall Series match
WoSo Around the World: NWSL players load up on goals, Nagasato plays with the men