WoSo Around the World: Wolfsburg tripped up late by Freiburg 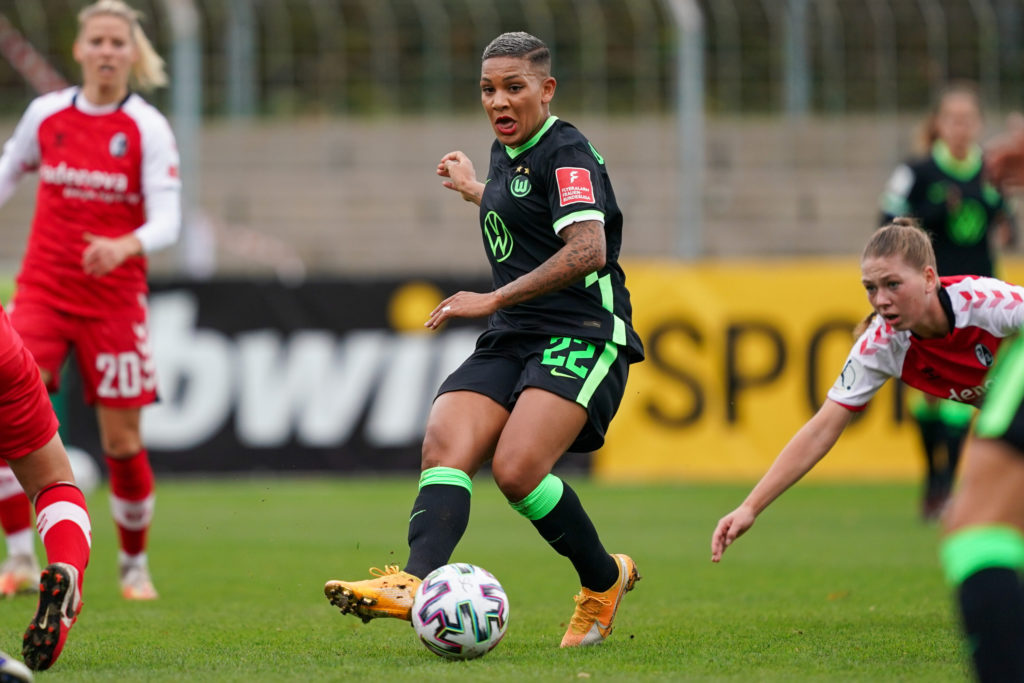 Wolfsburg were stunned late by Freiburg to give Bayern Munich early control in Germany. Meanwhile in France, one NWSL player nabbed a hat trick and one might-have-been NWSL player did her one better by scoring four!

The Latest: Bayern Munich took early control of the Frauen Bundesliga with a 4-0 hammering of Hoffenheim while Wolfsburg could only manage a draw against Freiburg. Hasret Kayikci scored in the 95th minute to give Freiburg the result and take the first two points this season off Wolfsburg. Wolfsburg and Germany captain Alexandra Popp was stretchered off with a foot injury during the match. Bayern have checked in second to Wolfsburg the last four seasons but have yet to drop a point or concede a goal in the current campaign. In another surprising weekend result, SC Sand scored in the 77th (Dorthe Hoppius) and 80th (Chiara Loos) to defeat Frankfurt, 3-2. The league also played midweek and Frankfurt needed a stoppage-time penalty from Laura Freigang to squeak out a 2-2 draw with Bayer Leverkusen. Werder Bremen and Meppen were postponed and will play Wednesday.

The Latest: Atletico Madrid’s title hopes took an early hit when Raquel Pena Rodriguez scored a penalty for Granadilla in the 90th minute to earn a 1-1 draw. Atletico had led from the 53rd minute when Merel van Dongen scored. Meanwhile, holders Barcelona had no issues dispatching Logrono 6-0. Athletic Club joined Barca on 6 points with a 2-0 win at Sevilla behind a first half brace by Lucia Garcia. Meanwhile, Real Madrid earned their first point since the rebrand, drawing Valencia 1-1 away. Real had a lead but it was short-lived as Cristina Cubedo answered Kosovare Asllani just two minutes after the opener. Eibar rallied for two goals in the final quarter hour to draw Levante 2-2 away and remain undefeated since being promoted. Thembi Kgatlana, formerly of the Houston Dash, scored the equalizer in the 3rd minute of stoppage time. Rayo Vallecano and Sporting de Huelva were postponed.

The Latest: Khadifa “Bunny” Shaw enjoyed her most successful day as a pro when she bagged four goals for Bordeaux against Fleury 91. The four-pack moved Shaw to the top of the league’s scoring table with six goals. She is one ahead of Kadidiatou Diani, who did not score in PSG’s 4-0 win over Montpellier that gave the perennial runners-up early control of second place. Evelyne Viens, of Canada and Sky Blue, had a hat trick for Paris FC against Issy.

The Latest: Sam Kerr scored what proved to be the match-winner as Chelsea took down Manchester City 3-1 in the highest profile match of the season so far. But Chelsea are still chasing Arsenal (d. Brighton, 5-0) and Everton (d. West Ham) who both remained perfect through four rounds. Aston Villa were postponed against Bristol and are postponed this weekend against Chelsea. Check out Alexandra Ibaceta’s full WSL recap here:

Rachel Corsie (Royals) played the last 26 minutes in Birmingham City’s 1-0 midweek win over Blackburn in the Continental Cup and then went all the way in Sunday’s 1-0 league loss to Reading…Claire Emslie (Pride) played 171 of 180 minutes for Everton who dropped a 3-1 Continental Cup decision to Manchester City but stayed perfect in the league, with a 3-1 win over West Ham in which Emslie assisted on the opener…Sam Mewis (Courage) was a late sub for Man City in the Cup and played 90 in a loss to Chelsea that saw her get booked in first half stoppage time. Rose Lavelle (Reign) scored the goal that ignited Man City’s rally in the Continental Cup and was a late sub in the weekend loss to Chelsea…Jess Fishlock (Reign) assisted on the first of Reading’s five goals last week. The first four were a 4-0 Cup win over Charlton and the fifth was against Birmingham City in the league. Fishlock played the opening half against Charlton and all 90 minutes on the weekend…Alanna Kennedy (Pride) scored on a direct free kick to aid Tottenham’s 4-0 Cup win over London City, but was forced out of the weekend match with a little over 15 minutes to play after appearing to roll her ankle. Shelina Zadorsky (Pride) played both matches in full for Spurs but Alex Morgan (Pride) is still not fit enough to be included on match days…Emily Van Egmond (Pride) and Rachel Daly (Dash) both played two full matches for West Ham United. In the Continental Cup, Daly finished Adriana Leon’s cross for a goal in normal time but hit the crossbar in the penalty shootout against Brighton. Kennedy did score her penalty to help West Ham advance…Denise O’Sullivan (Courage) started for Brighton but was taken off late and was not around for penalties. O’Sullivan also went most of the way in the 5-0 home loss to Arsenal…Tobin Heath (Thorns) earned her first two starts for Manchester United and assisted on Millie Turner’s goal to beat Tottenham 1-0. Christen Press (Royals) subbed on in the Cup loss to Liverpool and started against Tottenham.

Makenzy Doniak (Red Stars) went the first 72 minutes for HB Køge in a 5-0 win over Brøndby. Emily Boyd (Red Stars) sat it out with a knee injury…Machaela George (Reign) played the second half for Fortuna Hjorring A/S, 5-1 winners over AGF.

Neither Carson Pickett (Pride) nor Cassie Miller (Red Stars) were on the team sheet for Apollon Ladies FC over the weekend.

Kayla Sharples (Red Stars) played the last 70 of 90 minutes on a yellow card but helped Kuopion Palloseura over PK-35 VANTAA, 2-0.

Taylor Kornieck (Pride) started and played 74 and 64 minutes in a pair of Duisburg losses last week…Meaghan Nally (Thorns) was on the other side for Turbine Potsdam against Duisburg but she was subbed out before 25 minutes were played. Nally played 90 in the weekday win over Freiburg.

Evelyne Viens (Sky Blue) scored a hat trick for Paris FC, 5-0 winners over Issy. Kaleigh Rhiel (Sky Blue) was not dressed for Paris…Darian Jenkins (Reign) had an assist in Bordeaux’s 6-1 pummeling of Fleury 91. Celeste Boureille (Thorns) was on for the full 90 representing Fleury…Jodie Taylor (Reign) came on for the last 8 minutes in Lyon’s latest win, this one 2-0 over Dijon. Celia Jimenez Delgado (Reign) did not and has yet to dress for Lyon.

This is the hat-trick. Excelent positioning and reading of the opportunities to score. Specially the second goal, anticipating everyone. pic.twitter.com/2YbVpJE0gq

Ali Riley (Pride) provided a weekend assist to Caroline Seger one minute after entering the match but it was not enough to get FC Rosengard by Kristianstads (l. 2-1). Riley had played 90 minutes in Wednesday’s Svenska Cup win over Eskilsminne. Lauren Barnes (Reign) played in the league win for Kristianstads but did not dress for a midweek Cup win. Hailie Mace (Courage) also started both matches for Kristianstads and scored in the Cup victory…Lindsay Agnew (Courage) played 90 in KIF Örebro’s midweek Svenska Cup win…Emily Sonnett (Pride) did double duty for Goteborg, going the distance in Cup and league wins. Sonnett was yellow carded in the Damallsvenskan match…Quinn (Reign) and Elizabeth Eddy (Sky Blue) were instrumental in Vittsjö GIK defeating Umeå, 3-2. Eddy scored the opener.

Erin McLeod (Pride) let one go by for Stjarnan in a 1-1 draw against Fylkir…Gunny Jonsdottir played the entire match in Valur’s 1-0 loss to Breidablik.

CeCe Kizer (Dash) subbed on in the 71st minute but could not get Kolbotn over the line against Rosengard who took the tilt, 1-0.

Camila (Pride) subbed in during the second half of SE Palmeiras’ 1-0 win over Brasileiro.

FAWSL Week 4 round-up: Arsenal, Everton remain perfect
Fran Kirby is in the form of her life despite a modified role with Chelsea