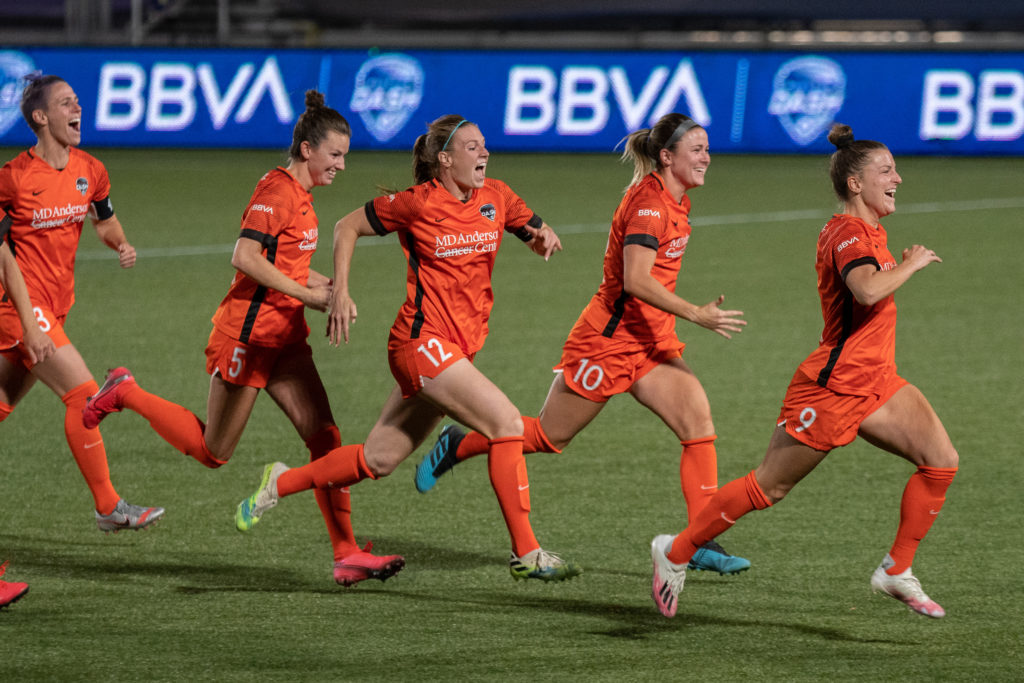 Kristie Mewis and Shea Groom had a reason to smile before the Houston Dash claimed a 2-1 victory over the Orlando Pride. Groom and Mewis were both announced as inclusions to Vlatko Andonovski’s roster for the upcoming U.S. women’s national team camp in Colorado.

They celebrated with big performances, once again, in National Women’s Soccer League competition this year.

Hot off the NWSL Challenge Cup, where the Dash claimed victory, Houston recorded three wins and one loss in the NWSL Fall Series. They opened up competition with a loss against the Courage. However, the team extracted revenge against North Carolina last weekend.

This weekend, it was pure dominance against Orlando. Groom wasted no time in getting the Dash on the board. She leapt in the air, using her head to get the ball like she did many times in the Challenge Cup. Mewis — who was coming off a three assist, one goal, game against the Courage last weekend — recorded the assist on Groom’s goal.

Mewis also recorded another assist on Friday night, feeding Veronica Latsko the ball in between two defenders. Latsko found herself one-on-one with goalkeeper Brittany Wilson, who started in place of Ashlyn Harris, who did not dress on Friday night. Wilson, in her NWSL debut, recorded five saves against Mewis, Groom, Sophie Schmidt, Bri Visalli and Latsko.

Meanwhile, for the Pride, Sydney Leroux scored her first goal in over two years to open the second half. Abby Elinsky, who entered the match in the first half for an injured Carrie Lawrence, fed Leroux the ball for the assist.

Houston’s time in the Fall Series is over and done. In the Southeast group, the final match of the Fall Series will be against the Pride and the Courage on Oct. 17 at 4 p.m. EST. The match will air on CBS and will take place at Exploria Stadium.

The Goals for Houston and Orlando

We have lift off for @HoustonDash!@sheabayy2 gives the visitors the lead.

.@V_Latsko12 making it look easy and how about that pass from @KristieMewie 🤩

Great to see @sydneyleroux back on the scoresheet 😍