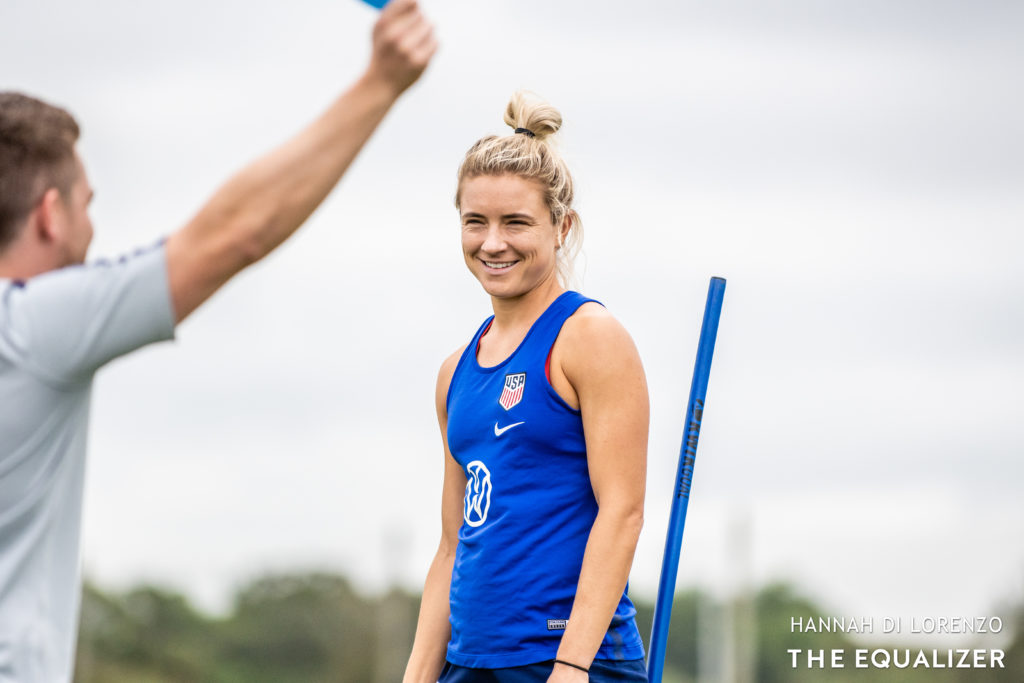 Catarina Macario and Kristie Mewis are among a group of 27 players who will travel to Colorado on Oct. 18 for the United States women’s national team’s 10-day training camp in Commerce City, Colo. The call-up is the first for Macario on the senior national team as she awaits her U.S. citizenship. No international games will be played at this camp — the U.S.’ first gathering in over seven months due to the COVID-19 pandemic — which clears the way for Macario to train with the team despite not yet being eligible to play in an official match.

Mewis is another highlight of the roster, returning to camp with the full senior team after a standout 2020 with the Houston Dash. She was an integral part of the team’s run to the National Women’s Soccer League Challenge Cup title and to their 2-1-0 record to date in the NWSL Fall Series. Mewis tallied a goal and three assists in Sunday’s 4-1 win over the North Carolina Courage.

Her sister, Sam, will remain in England with Manchester City and will not be at camp, even though the camp falls during an international window. The same is true for Manchester City teammate Rose Lavelle, Manchester United forwards Christen Press and Tobin Heath, Tottenham forward Alex Morgan and Göteborg defender Emily Sonnett. U.S. head coach Vlatko Andonovski only called in domestic-based players due to the complications around international travel and subsequent quarantines required, as The Equalizer first reported to Extra subscribers on Tuesday.

“For this camp, it just did not make sense for the players in Europe to leave their club environments, where they are getting quality training games, as they are just starting to get settled,” Andonovski said in a release. “But this opens up the important opportunity for other players to step up and show if they can contribute to the National Team during our run to the Olympics.”

U.S. Soccer says the camp will be conducted under strict protocols to ensure health and safety (the federation posted specifics here). Players will arrive on Oct. 18 and be tested before being cleared for small group training and then full-team training. The greater Denver area was selected over several other locations — as also first reported to Extra subscribers on Tuesday — because of its relatively low rate of COVID-19 cases.

Macario is one of four college players called in to camp and the headliner of the roster for her superior talent and long-term upside. She just turned 21 and would have been playing her senior season at Stanford right now had the Pac-12 season not been delayed due to the pandemic. She has tallied 63 goals and 47 assists in 68 games for the Cardinal, winning two NCAA championships and twice winning the MAC Hermann Trophy as college soccer’s best player. She was born in Brazil and moved to the U.S. a decade ago with the dream of becoming a professional player. She has long stated her intent to represent the United States once she obtains her citizenship.

Macario’s former Stanford teammate, Sophia Smith, also returns to U.S. camp after recently debuting with Portland Thorns FC. Smith was the No. 1 overall pick in the 2020 NWSL draft but missed the Challenge Cup due to a lingering injury. She scored three minutes into her Thorns debut on Sept. 20 in a 3-0 victory over Utah Royals FC.

“We want to reward players who have done well for their clubs and give them a chance to step up and perform in our environment,” Andonovski said. “We have a lot of uncapped players and a few who have had the chance to earn a few caps, but we know that deepening our player pool is important as we head into 2021.”

The U.S. could gather again for November programming. General manager Kate Markgraf recently laid out plans for the annual January training camp and SheBelieves Cup in February, though it remains unclear how realistic those things are — particularly the prospects of international opponents traveling to the U.S. to play. The Tokyo Olympics are slated to begin in July 2021, delayed a year due to the pandemic.

Extra Scoops: USWNT to hold first camp in seven months
Catarina Macario is the future — and maybe the present — of the USWNT