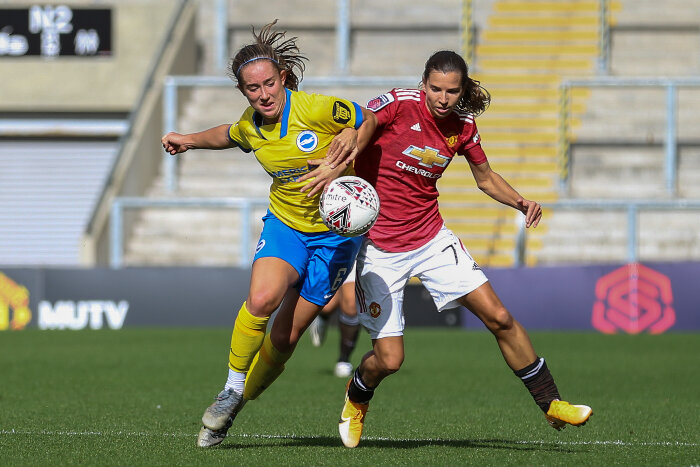 The FA Women’s Super League returned this weekend after an international break and a break for the FA Cup quarterfinals and semifinals. After making her first appearance for Manchester City midweek in the FA Cup semis, Rose Lavelle made her WSL debut on Sunday, while Tobin Heath and Christen Press wore the Manchester United kit for the first time on Sunday as well.

After three matches, Arsenal and Everton sit atop the table, both with nine points, while Chelsea, United, and City all trail closely behind with seven points.

After a strong 2-1 win over Arsenal on Thursday in the FA Cup semifinals, Manchester City continued gaining momentum this weekend with a 4-1 win over Tottenham Hotspur. As for USWNT players, Sam Mewis played 70 minutes and scored, while Rose Lavelle was subbed on in the 62nd minute. American fans are still waiting for Alex Morgan’s Spurs debut, as she was not available on Sunday.

Spurs were able to hold City level for the first half-hour of the match, but a sublime strike by Chloe Kelly outside the penalty area in the 33rd minute gave them the breakthrough. Tottenham was not happy after the goal, as they had a player down on the pitch after they turned the ball over. But as it wasn’t a head injury and no whistle was blown, City did no wrong by the laws of the game in continuing the play.

In the second half, Kelly converted a penalty kick to add a second, while Mewis and Ellen White rounded out the scoring for City. Mewis also hit the post in first half stoppage time.

Meanwhile, Sam Mewis got her first WSL goal with this smooth finish in City's 4-1 win over Spurs.

Goes quite nice with her mid-week goal in the FA Cup semifinal 💥pic.twitter.com/J1QZKzKsET

Spurs had difficulty at times retaining the ball in City’s half when they won possession, and thus had trouble creating many chances of their own. But they were able to pull one goal back in the 80th minute when Anna Filbey got her head on a corner kick and redirected it past Ellie Roebuck.

Prior to the match, Morgan gave an update on her progress on Twitter: “The hardest part about coming back after pregnancy is being patient with myself. I can’t wait to get on the pitch with my team, but that will have to wait until I’m 100% fit. 2nd week of team training down, and I’m feeling fitter & faster every day.”

Manchester United remain unbeaten in the WSL after a strong 3-0 win over Brighton on Sunday. Just nine minutes into the match, Alessia Russo went up for a header but was brought down in the box, and the referee pointed to the spot. Ella Toone calmly converted the penalty to put United up.

In the 69th minute, Russo found the net herself, as she intercepted a pass near the halfway line, dribbled towards goal and slotted her shot into the back of the net.

Tobin Heath and Christen Press made their much anticipated United debuts in the 70th and 77th minutes respectively, and both got involved quickly. Press hit the post in the 87th minute, and Heath assisted United’s third goal in stoppage time.

And Press almost got a goal just minutes after subbing on! This one hit the post and stayed out…pic.twitter.com/nspsZQCRH0

After upsetting Chelsea 2-1 in the FA Cup quarterfinals, and beating Birmingham City 3-0 on Wednesday in the semifinals, Everton continued their winning ways on Saturday by putting six goals past Aston Villa.

Hayley Raso and Claire Emslie both scored braces, while Valérie Gauvin and Chantelle Boye-Hlorkah added one each. Gauvin now has four goals in five games for Everton.

Said this the other day (and yes, this is already out of hand against Villa today): Valerie Gauvin is already a huge addition for Everton and the FAWSL. This Raso/Gauvin combination is looking strong early in the season.pic.twitter.com/nk736wGfPc

Though they didn’t make as many headlines as other WSL clubs, Everton had a solid off-season. Along with Raso and Izzy Christiansen, who both joined the squad in the winter transfer window but weren’t able to play until the start of the new campaign due to injuries and then the lockdown, Everton have added a number of other international talents. Gauvin and Emslie joined in the off-season, along with Danish internationals Nicoline Sorensen and Rikkie Sevecke, and Norwegian international Ingrid Moe Wold. The signings have covered Chloe Kelly’s move to City, and added defensive depth.

Coming off a lackluster performance in their 2-1 loss to Manchester City in the FA Cup semifinals on Thursday, Arsenal were able to come from behind to defeat Bristol City 3-1 on Sunday.

In the 6th minute, Arsenal’s Leah Williamson wasn’t quick enough in getting rid of the ball and was dispossessed in the middle of her own half by Britsol’s Ella Mastrantonio. Mastrantonio found Abi Harrison, whose shot from 30 yards out managed to beat Arsenal keeper Manuela Zinsberger. Zinsberger should’ve done better on this one, as she seemed to dive too early and missed the bouncing shot.

But Arsenal was patient, and worked their way back into the match before half-time. Jordan Nobbs equalized in the 42nd minute, when her perfectly timed run put her in the right position to finish a cross sent in by Caitlin Foord. Nobbs is on a bit of a scoring streak, as she’s netted a goal in her last three matches.

Just after the halftime break, Foord was able to stretch and get a foot on a cross by Beth Mead to score a goal of her own. And after not seeing much of the ball in Arsenal’s FA Cup loss to City, Vivianne Miedema was able to find the net in the closing minutes of this one to give her side an insurance goal.

Despite being one of the shortest players on the pitch, Fran Kirby managed to get her head on Erin Cuthbert’s free kick in the 9th minute to give Chelsea the 1-0 win over Birmingham City on Sunday. Birmingham’s Rebecca Holloway could’ve done better keeping tabs on Kirby on the set-piece.

While Chelsea were quite unlucky not to add more, credit should be given to Birmingham for keeping the scoreline tight, especially when Chelsea can afford to bring the likes of Sam Kerr and Pernille Harder on as second half subs. Birmingham was organized in putting numbers behind the ball, which frustrated Chelsea at times.

Since the last weekend of WSL matches, both sides have bowed out of the FA Cup, as Chelsea were beaten 2-1 by Everton in the quarterfinals, while Birmingham reached the semifinals but lost 3-0 to Everton.

Reading earned their second win of the season on Sunday, as they downed West Ham by a goal to nil. In the 26th minute, Natasha Harding whipped in a cross towards the six-yard box, where Lauren Bruton was able to poke it into the back of the net past keeper Mackenzie Arnold.

West Ham had a number of chances to equalize, including two by Adriana Leon. In the 53rd minute, her shot forced a diving save from Reading keeper Grace Moloney, and just minutes later Leon did even better with a rocket of a strike that Moloney was able to tip over the bar. But Moloney’s best save of the match came in the 60th minute, when she got down to deny Kenza Dali’s penalty kick.

Matt Beard’s squad is off to a poor start to the new campaign, as they’ve scored just two goals but conceded 11 on their way to one point.