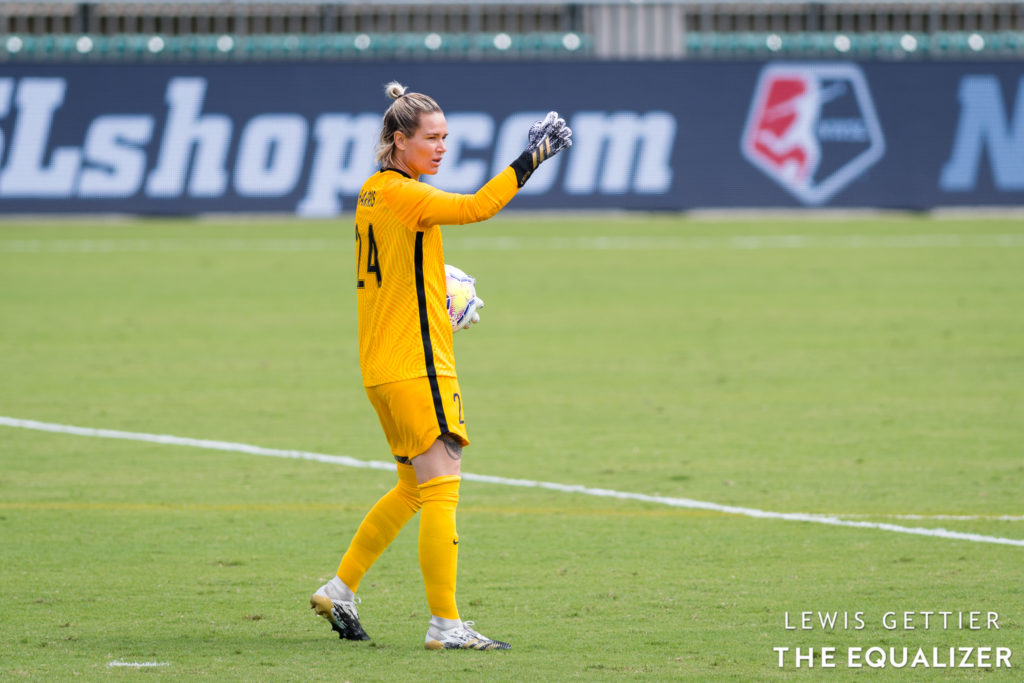 Not long before the Houston Dash kicked off their first home game of the National Women’s Soccer League Fall Series, against the Orlando Pride on Sept. 26, it became clear that the visiting team was dealing with additional absences that hadn’t quite made the injury report. Earlier that day, defender Kristen Edmonds posted on her social media that she wouldn’t be traveling with her team, saying, “Personally, I was not comfortable with the travel arrangements as well as the timeframe of recent events.” Her statement was followed by striker Sydney Leroux, who also did not travel to Texas, saying “I made the decision not to travel to Houston with my team for the game tonight. The health and safety of my family (Leroux has two young children) will always be my priority and I didn’t feel comfortable with recent events and the timeline of their positive test.”

The COVID-19 positive case both players referred to was reported by the Dash on Sept. 23. Houston then suspended training for a day, and subsequently tested the rest of the team multiple times throughout the week to make sure the case hadn’t turned into a full-team outbreak. As of this writing, they’ve reported no other positive tests (the league does not release weekly testing info).

But there have been problems in other sports that have highlighted some of the timing issues of concurrent testing, with players not carrying enough viral load to show up on tests until days after being exposed — a scenario that was unlikely on Saturday night, but not impossible. (The CDC still recommends those who came into contact with a confirmed positive case to quarantine for a full 14 days – maybe 10 if testing is available). The Pride flew on a commercial airline into the Houston area, and the Dash allowed fans (under a cap of 3,000 people) into the match.

Despite the initial confusion at Orlando’s last-minute missing pieces, players opting out of specific games hasn’t been that unusual throughout this year. In addition to the players that sat out either the Challenge Cup or the Fall Series in their entirety, on occasion players have been listed on injury reports for personal reasons — a right protected in the NWSL PA’s contract negotiations with the league. Even just within the Fall Series, North Carolina goalkeeper Stephanie Labbé signed on for home games only, and Chicago Red Stars defender Sarah Gorden missed her club’s first game after taking extra time off after the Challenge Cup. The nuance in these decisions is personal and frequently private, with the NWSL’s announcement of more games being made after uncertainty that put players in limbo (and forced many to secure moves to Europe). The Fall Series has also opened up issues of travel, along with loosened bubble restrictions, and there are no clear-cut wrong or right decisions about whether or not to play in any given game.

However, after the Dash’s 3-1 victory, Pride goalkeeper Ashlyn Harris implied a certain amount of resentment from Orlando players — even those who participated — towards the Dash, who had some social media posts of a team outing come under scrutiny the previous week. Back in June, the Orlando Pride couldn’t participate in the 2020 Challenge Cup due to initially positive tests stemming from similar behavior (many turned out to be false positives, but the inconclusive tests came too close to the tournament for the Pride to participate).

“We’ve got players on our team that went through a traumatic experience,” Harris told reporters after the game. “Households were separated, children were testing positive. There’s a lot of emotional trauma that our team went through and I’m not going to sugar coat that. We still have players who are not at 100% after testing positive for the COVID. It’s been a very difficult time for our club and our players. We went through pretty tough things together collectively and individually when we were quarantined and people tested positive. You know, Syd has a family. She has a family to take care of and they rely on her and she didn’t feel comfortable and we support her with that. The team didn’t feel comfortable. There’s no surprise that a lot of things were surfacing on the internet of the Houston team not doing their job social distancing and being out and about without masks, and after what we went through and the guidelines, you know we have been going — we don’t leave our home. We don’t go to restaurants. We don’t go out in public. We’ve been at our grocery store once a week.”

“This has been difficult and to see people out and about not taking our safety into account after the traumatic experience we had, I don’t blame players just saying ‘it’s not for me; I’m not going.’ And that’s what Kristen and Syd did, and it sucks and this is the reality, but this is COVID. Everyone has to do the right thing and whether they do or don’t, we can’t do anything about it. But when it comes to health and safety, everyone has to make their own individual decision and we support that and so does our club. Our club completely supports it and that’s the decision that they made. It wasn’t easy for any of us, but we missed them tonight, but we also support their decision.”

On one hand, Harris was just answering a question about a charged pre-game situation with her club — and she did so honestly. It’s also fair to say that other players in the league have affirmed that they’re comfortable with the Fall Series protocol. But that kind of an honest response probably deserves some reflection, in the context of the frustration she expressed towards other players’ social media. Social media itself is a limited view, but it does point to a lack of inter-communication between teams sharing a competition pod — and a vacuum of regulations for individual behavior.

In the bubble of the Challenge Cup, NWSL players didn’t leave their hotel for anything other than training, and they even went so far as to avoid contact with opposing teams when passing each other in the lobby. The Fall Series protocols have a looser view of what’s appropriate for player behavior, stating merely that, “Masks must be worn at all times when outside of your apartment or room (except when exercising, training, playing or eating).” The incident Harris was ostensibly referring to was one where the Dash were eating and drinking outdoors – something allowed in the state of Texas.

Some teams have said that they have taken it upon themselves to put stricter restrictions on their own squads (Harris’ statement perhaps indicates the Pride have taken such a tactic), but Saturday’s game also speaks to how the NWSL can not completely extricate itself from the current politicizing of the pandemic in the United States. Leaving restrictions to local guidelines in terms of training ability was been a tenant of the NWSL protocol response since before the Challenge Cup, and it was a discrepancy that teams were willing to absorb to make sure games happened. Training restrictions in May and June in Houston, for example, were not the same as those in Chicago. This isn’t the NWSL’s fault — every state’s response to the pandemic has been singular, and related to the politics of their ruling parties. But it does take a toll.

When the NWSL took its teams to Utah, they did so on the premise of a shared guideline of rules and regulations for every team. It was a way of evening the playing field and ensuring player safety, but it also took a physical and emotional toll on everyone participating. The Fall Series has felt like a reasonable middle ground between a bubble tournament and a regular season. But it’s also accepted ambiguity into the process of keeping players safe, and it’s not shocking that this has led to disagreements between those participating about what’s appropriate.

It’s understandable for members of the Orlando Pride, who perhaps have a closer look into the realities of life close to the virus, to express frustration with players doing anything short of total lockdown. But the Houston Dash, by the rules of both their state and the league, did nothing wrong. You can blame the natural friction on many things, but it speaks to a tipping point in player frustration, with each other and with this year in general. The true fallout from the stress will become known in months ahead.

For Alex Morgan, a move to Tottenham was both a surprise and a slice of familiarity
Yokoyama scores a stunner in Washington Spirit 1-0 win over Sky Blue