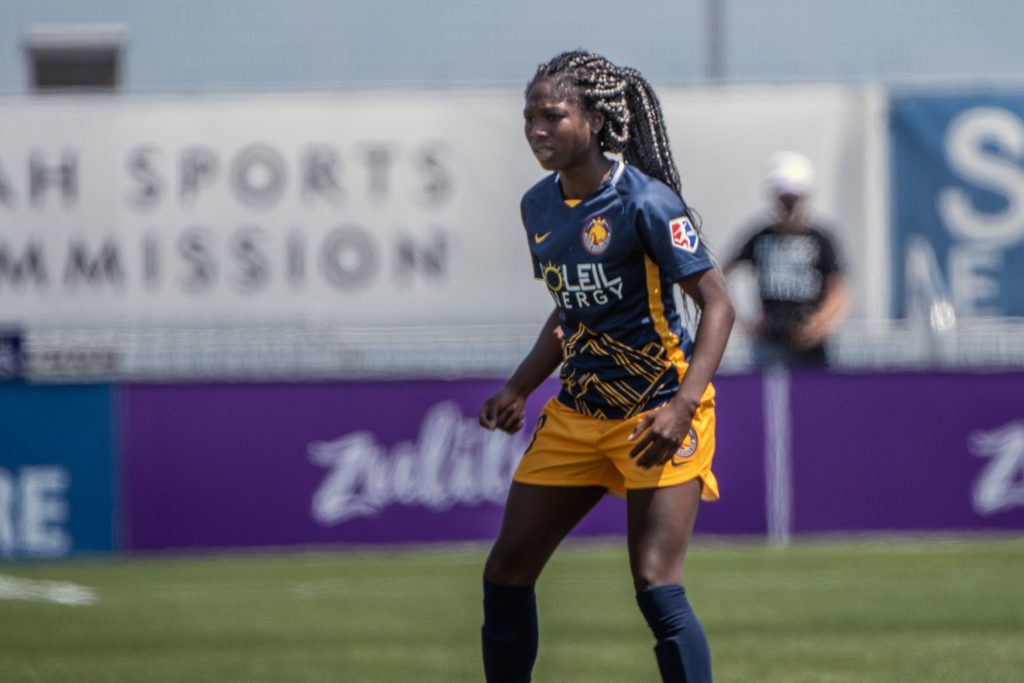 The Utah Royals and OL Reign played to a tightly contested 2-2 draw in NWSL Fall Series action on Saturday afternoon in Sandy, Utah.

Saturday’s match was (finally) OL Reign’s debut in the NWSL Fall Series, as their match against the Portland Thorns originally scheduled for Sept. 12 was rescheduled twice because of poor air quality due to the wildfires on the West Coast. This game also featured the return of in person attendees to an NWSL match, as the Utah organization chose to allow a limited number of fans to watch from the stands at Rio Tinto Stadium.

Aminata Diallo got Utah on the board early, breaking her team’s 409 minute scoreless streak, which spanned back to this summer’s Challenge Cup. In the 9th minute, an attempted clearance from OL Reign’s Stephanie Cox fell to Diallo at the top of the box, and Diallo had enough time and space to take a touch and fire her shot past keeper Casey Murphy.

GOAL @UtahRoyalsFC! Diallo breaks a 409 minute scoreless streak for the Royals to give them a 1-0 lead over the Reign. pic.twitter.com/Nk5g6DcDMf

Just over ten minutes later, standout rookie Tziarra King scored a second for the Royals. Brittany Ratcliffe sent a cross towards the penalty spot, where King was unmarked. She made no mistake in putting the ball away with her head.

But the Reign got themselves back into the game just a minute and a half later. Cox fed the ball towards Utah’s 18-yard-box, where Sofia Huerta let the ball run through her legs. Bethany Balcer ran onto the dummy pass, and sent the ball into the upper 90.

OH MY! And @OLReign pull one back!! Through the legs pass and then Balcer sends it upper 90!#UTAvRGN | 2-1 pic.twitter.com/xKmmzY2tMz

And OL Reign didn’t stop there. Just before the first hydration break of the match, Jasmyne Spencer teed up a pass from Shirley Cruz for Rosie White, who was able to beat keeper Melissa Lowder for the equalizer.

AND AN EQUALIZER FROM @OLReign!! Spencer tees this one up and White sends it into the back of the net.#UTAvRGN | 2-2 pic.twitter.com/e2kKahMNrY

The matched slowed in the second half, as both teams struggled to get much going in the way of chances on goal after the half-time break.

But in the last minutes of the game, the Royals had two chances to score a winner. In the 86th minute, King fired a shot that curled just wide of the Reign’s goal. And just before the final whistle, a wild sequence forced a tip save from Murphey on a last ditch shot attempt from Lo’eau LaBonta.

Scenes just before the final whistle, as the Royals allllmost found a winner! #UTAvRGN pic.twitter.com/chKKWl5mZW

The Royals did not get the chance to take the resulting corner kick, as the suggested two minutes of added time had long since passed. The referee blew the whistle and this one ended 2-2.

Next up for OL Reign is their twice rescheduled match against Portland, now taking place on Wednesday at 10 pm ET, while Utah will play Portland next Saturday at 10 pm ET.