In search of change on and off the field, Kaiya McCullough recharges in Germany 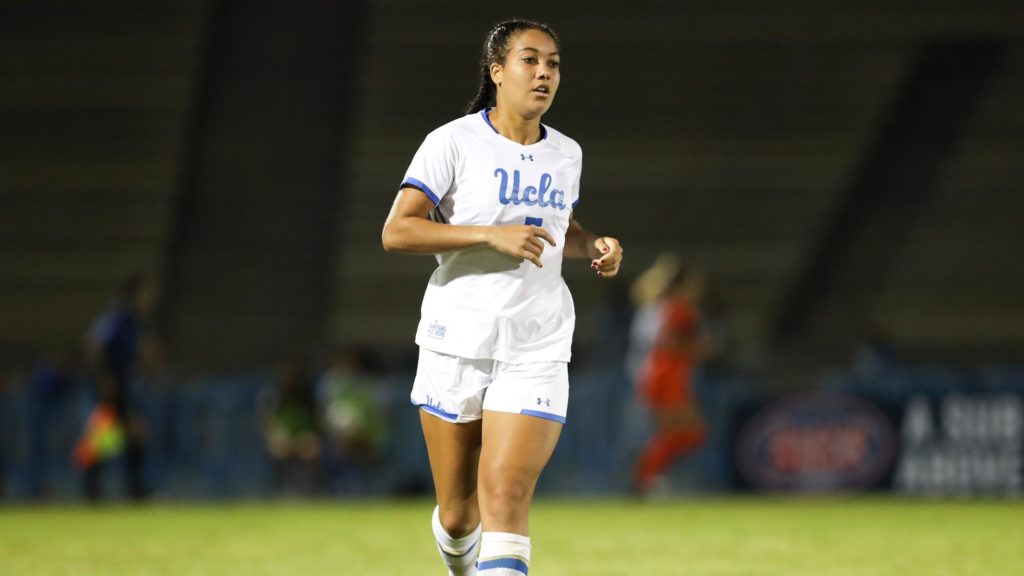 In July, former Washington Spirit defender Kaiya McCullough was in Utah in the bubble created by the National Women’s Soccer League for the 2020 Challenge Cup — a tournament that saw the league become the first team sport to return in the United States.

While the bubble successfully stopped the COVID-19 virus from entering — with no confirmed positive test results over the month-long tournament — it could not totally shut out the rest of the world. Nor should it. Following the deaths of Ahmaud Arbery in Georgia, Breonna Taylor in Kentucky and George Floyd in Minnesota, the NWSL, like the rest of the world, could no longer ignore the racial inequality or the Black Lives Matter movement.

As one of only two Black players on the Washington Spirit roster, McCullough found herself exposing her own vulnerability in a hotel room full of her white teammates. McCullough and Tegan McGrady described their personal experiences of racial inequality and in McCullough’s words, Black trauma. The emotional meeting in Utah left McCullough and McGrady sobbing in front of their teammates.

“That was a lot of education to carry on our shoulders,” McCullough said. “There was a lot of people coming up to me being like, ‘What can we do?’ while we also tried to further the movement, educate others, take care of ourselves and play soccer. It was just too much.”

Spirit captain and NWSL Players Association president Tori Huster admitted there were mistakes in the beginning of the team’s trip to Utah regarding how best to support McCullough and McGrady.

“There was so much emotion, so much happening outside of our bubble that I think really affected them. Listening was super important,” Huster said. “I want to say we’re trending in the right direction, but I know sometimes there will be setbacks or we’ll take two steps back to hopefully take five steps forward.”

Before, during and after the Challenge Cup, McCullough said there was a pressure to “compartmentalize” what was happening off the field and perform at her top level. She was vocal about the need for change on her own social media handles and in conversations with media. McCullough echoed the sentiment described by the All For XI article, “White NWSL players’ silence is failing their Black teammates.”

Through the past six months, McCullough has been a leader off the field for the Spirit, speaking openly on social media about racial injustice, specifically focusing on police brutality. Although this year has reignited her passion for activism, McCullough has been publicly taking a stand since 2017. In her sophomore year at UCLA, McCullough knelt for the national anthem following the movement started by NFL quarterback Colin Kaepernick.

When McCullough joined the Spirit via the 2020 NWSL College Draft, she knew she would eventually have to sit down with the team’s ownership to discuss her kneeling. She had already decided prior to the start of her professional career that it was something she wanted to continue.

The previous majority owner of the Washington Spirit, Bill Lynch, made headlines in 2016 when he chose to play the national anthem while players were still in the locker room before a Spirit game against the Seattle Reign. The decision stopped United States national team forward Megan Rapinoe from kneeling during the anthem, something she had done a week earlier and would later do while playing for the national team. Steve Baldwin is now the new majority owner of the Spirit, and he has spoken to McCullough about her advocacy for racial equality. He said he “made a commitment” to McCullough while she was a Spirit player to support her and her interests, “as he does all players.”

But as McCullough had increased her off-field responsibilities of working toward ending systemic racism, her time on the field never came with Washington.

“I really felt like my mental health was deteriorating and my confidence was going down,” McCullough said. “Honestly, my love for the game was disappearing day-by-day.”

After the completion of the Challenge Cup, McCullough asked her agent to look for options outside of the Spirit. While she felt good training with high-level competitors, the lack of game-minutes was wearing on her.

“I felt like I owed the little girl that started playing soccer when she was five. I owed the sport that has given me so much a lot more than just throwing in the towel,” McCullough said. “So, here I am, across the world trying to re-find my love for the sport.”

McCullough found her opportunity in the form of a new team in a new country. Earlier this month, the Washington Spirit waived her contract allowing McCullough to join FC Würzburger Kickers, a team that was promoted to the second tier of the Frauen Bundesliga this season.

Within a week of flying across the ocean, McCullough did something she hadn’t done in almost nine months: she started in a competitive soccer game. McCullough played about 75 minutes in an exhibition game for her new German club.

“It gave me hope that I will find that joy again,” McCullough said. “Even though I was tired and even though I don’t know the language, I was able to touch the ball and play in a game.”

While McCullough is excited about her new opportunity, the more she thought about McGrady staying in Washington as the sole Black player at the Spirit (forward Cheyna Matthews announced her maternity leave in January), the more she reconsidered the move.

“I almost didn’t pursue something that I knew would be so helpful to me because I didn’t want to leave her there to deal with all that alone,” McCullough said. “And that’s just where we are.”

As a team, Huster said the Spirit are continuing to support the efforts of the newly-formed Black Players of the NWSL, and continue to learn and educate others about the Black Lives Matter movement.

Prior to the start of the Fall Series, McCullough, McGrady, Spirit captains and several other players came together to form an idea of wearing shirts that said Black Lives Matter on the front and a phrase or call to action on the back. The team was going to wear them before the game against Sky Blue FC, but a last-minute coordination from Sky Blue forward Midge Purce switched the demonstration to unified shirts between the two teams.

“I think that was just an easy decision,” Huster said. “If you do it with more people and more people get behind it, it’s obviously a stronger statement.”

As for the Spirit’s campaign, there is still more to be done, but Huster is taking her phrase to action. She chose the word “vote” and is working with the team’s new partnership with Rally the Vote to help people get registered.

NWSL Commissioner Lisa Baird spoke about what actions the league as a whole is taking to support players and the Black Lives Matter movement. She highlighted the league’s Community Shield program, which awards the NWSL team with the most Fall Series points a grant to give to a partnered small business or community program.

As the first league back, Baird said she understood the responsibility of how to best use their platform, and was fully supportive when the players approached her and wanted to collaborate.

“To shine a light on community programs and businesses in local communities that can make a difference — I think you will really see the players and teams get behind that because now we have to go from deeds to actions,” Baird said to reporters at the first game of the Fall Series.

While McCullough won’t be with Washington to see the campaign — which will see the Spirit play for local nonprofit DC Scores — through, she is hopeful that the team and league are headed in the right direction.

Kickin’ Back with Nicole Hercules

On a personal level, McCullough’s move to Germany is one based in soccer, but she is maintaining her efforts to change the world with her book club focused on starting conversations about racial inequality and “injustices that Black folx are, and have been, facing in America,” she says in her description (editor’s note: “folx” is spelled intentionally). McCullough intends to conduct weekly Zoom meetings to discuss the books from Germany. The first book, “Just Mercy: A Story of Justice and Redemption” by Bryan Stevenson, is a memoir of the Equal Justice Initiative’s founder and his fight to overturn wrongful convictions given to people of color.

“Though it was about education, it was a little selfish, too, because just having conversations like this can be so powerful,” McCullough said. “In those individual conversations is where I have personally been most effective in creating change.”

Politics may be McCullough’s future — she hopes to one day possibly run for president of the United States — but for now she is focused on helping herself in order to continue to help others.

“My purpose here is to recharge my mental space. I can’t change that I’m Black, nor do I want to. I can’t change America all by myself,” McCullough said. “But what I can change is my own mentality. I’m trying to control the controllables right now, and again, really put myself in the absolute best position to perform.”