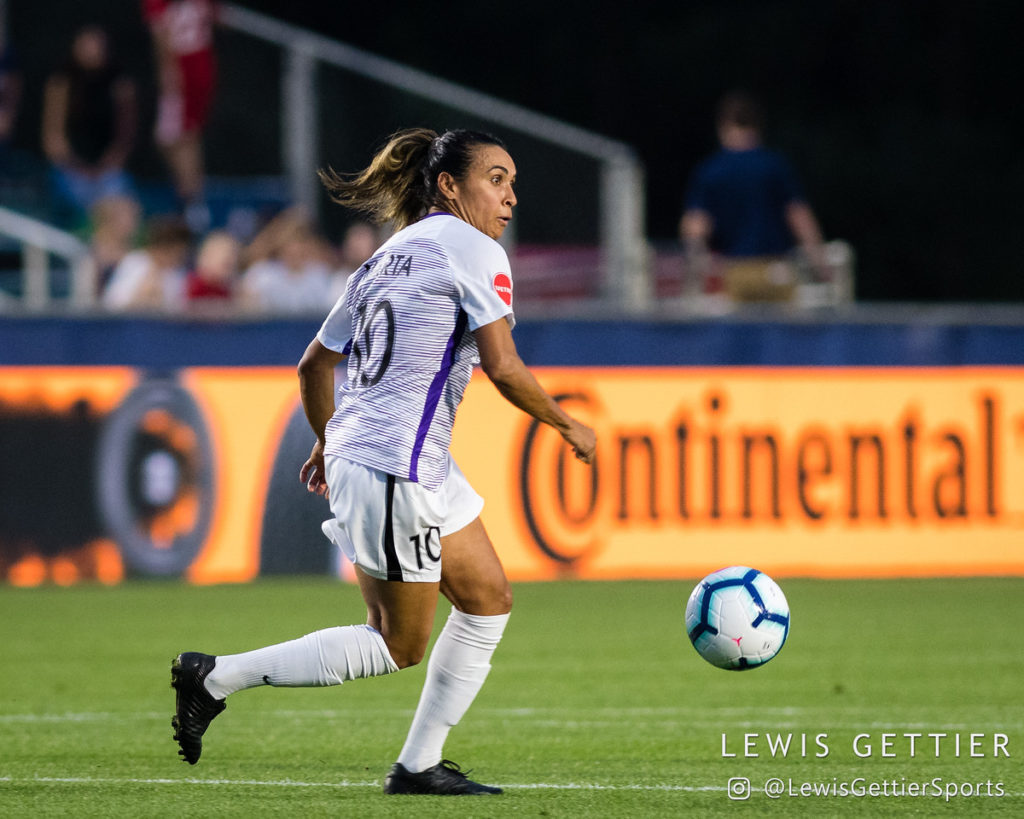 On Saturday in Cary, North Carolina, the Orlando Pride and North Carolina Courage fought to an exciting 0-0 draw. The match, which featured a number of chances for both sides, was the Pride’s first NWSL match in 343 days after missing out on this summer’s Challenge Cup due to series of COVID scares among the team.

The Courage had the first chance of the match in the 10th minute, as Debinha chipped a pass in behind to Lauren Millet. However, Millet sprung behind the Pride defenders a bit early, and the whistle blew for an offside call.

Just before the first hydration break of the match, the Pride would get their own look on goal when new signing Jordyn Listro sent a cross towards Sydney Leroux, who’s diving header went wide. It was Leroux’s first start for her club since 2018, as she gave birth to her second child during the 2019 season.

Another look for Leroux! Listro sends a ball in but Leroux's diving header is wide.#NCvORL | 0-0 | #NWSLFallSeries pic.twitter.com/7y8c8OV85Z

Before the half-time whistle, Debinha, who earned player of the match honours last weekend in North Carolina’s 4-3 win over Houston, had a great chance to put her side ahead, but her curling shot went just wide of goal.

Juuuuuust wide for Debinha! Check out the curve on this one 👀 #NCvORL pic.twitter.com/tQ9oeiektC

After the break, Pride keeper Ashlyn Harris was able to get her foot and hand on a close-range shot by Debinha to make a fantastic save and keep her side in the match.

What a save!! Harris gets a foot, then a hand on this one and is able to hang onto it! #NCvORL pic.twitter.com/s1EKS6Tg6L

In the 62nd minute, Lynn Williams was able to cut inside and create a great chance for herself. But it was the post that would save the Pride this time, as William’s left-footed shot hit the upright and stayed out.

POST!! What a chance for Lynn Williams! (And check out how she created that sequence for herself! 🙌)#NCvORL | 0-0 | pic.twitter.com/2CpbbfcNYC

As the minutes dwindled and both sides pushed for a winner, it was Orlando’s Carrie Lawrence who was involved in key plays on both sides of the field. In the 71st minute, Marta sent a cross to an incoming Lawrence on the penalty spot, but her volley hit the crossbar and went out of play.

Just ten minutes later on the opposite end, Williams attempted to cross the ball towards teammate Danica Evans, but her cross was too close to Harris. However, Harris wasn’t able to hang onto the cross, as the ball snaked through her hands and onto the goal line. With North Carolina’s Evans chasing it down, Lawrence was able to make the goal-line clearance to deny the goal and keep this one 0-0.

Orlando will take on Houston next Saturday, while next up for North Carolina is a trip to Houston on October 4th.