WoSo Around the World: PSG held to draw vs. Bordeaux 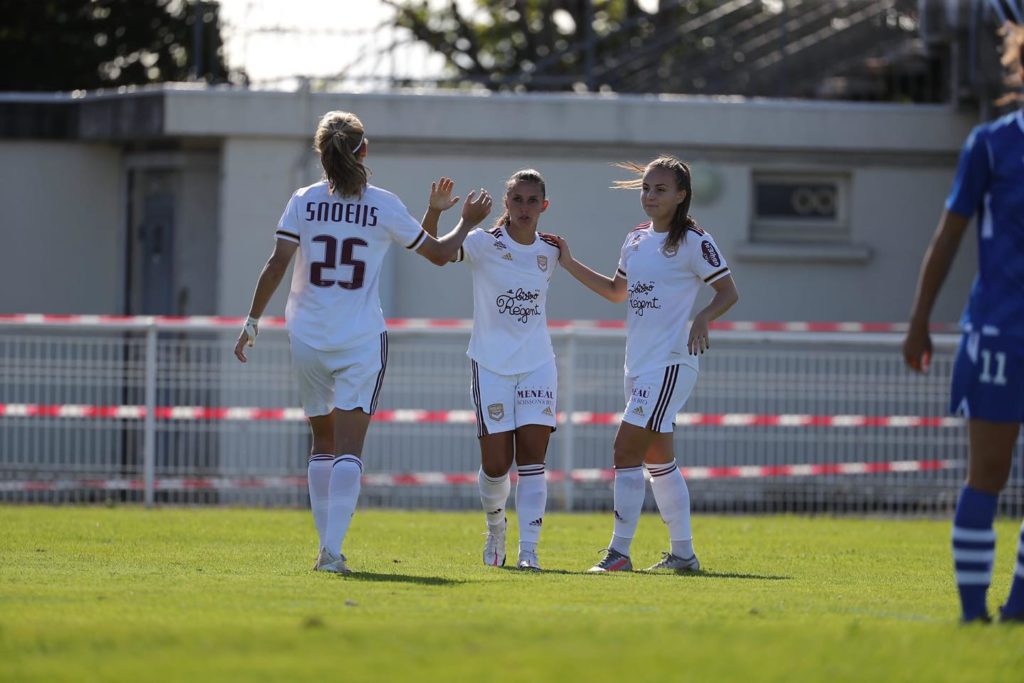 Week 2 in the French League produced an early surprise, and some lopsided results from England highlight the weekend of WoSo Around the World…

The latest: Marie-Antoinette Katoto’s 20th-minute penalty was saved by Anne Moorhouse and Paris Saint-Germain were never able to find the goal in a surprise, 0-0 draw at Bordeaux. The result is an early blow to PSG’s title hopes with Lyon winning 3-0 at Reims. A week ago, Bordeaux and Reims played to a season-opening, 4-4 draw. Ironically, the last domestic side to take points off Lyon was Bordeaux in a scoreless draw in January.

The latest: Parity took a hit on the weekend as Arsenal and Chelsea both connected for nine goals. Arsenal got a Jill Roord hat trick in a 9-1 dismantling of West Ham United. Chelsea had nine different players scored in a 9-0 beat down of Birmingham City. Sam Kerr scored the final goal of the nine just after Pernille Harder’s first as a Blue. Sam Mewis and Manchester City were held to a 0-0 home draw by Brighton & Hove Albion.

The latest: Bayer Leverkusen, who stayed up only on goal difference in their first season in the Frauen-Bundesliga, scored two late goals to improve to 2-0 on the new season. Milena Nikolic broke a scoreless tie against Duisburg in the 89th minute and Juliane Wirtz added stoppage-time insurance. Newly promoted Meppen earned a second consecutive draw but will regret surrendering a 2-0 lead over Turbine Potsdam. Maike Berentzen scored the club’s first goal in the top flight. Hungarian international Zsanett Jakabfi had a hat trick in Wolfsburg’s 4-0 route of Hoffenheim.

Lauren Barnes (Reign) connected on a long ball to Hailie Mace (Courage) who finished it for a goal in Kristianstads’ 3-0 win over Eskilstuna. Both played the full 90… Rachel Hill (Red Stars) and Quinn (Reign) played the full 90 in Linköpings’ 2-1 win over Vittsjo. Nicole Momiki (Reign), also of Linköpings, broke the 5th metatarsal in her left foot and is on her way back to Japan. Elizabeth Eddy (Sky Blue) was an unused substitute for Linköpings… Lindsay Agnew (Courage) started for Orebro and and Ali Riley (Pride) finished for Rosengård, who got the better of the match, 3-0. Agnew played the first 67 minutes for her side, Riley the last 21 for hers… Emily Sonnett (Pride) played the final 17 minutes for Goteborg (d. Djurgarden, 3-0).

Sam Mewis (Courage) started and went 76 minutes for Manchester City (0-0 vs Brighton & Hove Albion) while her Courage teammate, Denise O’Sullivan, played the second half for Brighton. Rose Lavelle (Reign) was not on the team sheet for Man City… Claire Emslie (Pride) played 90 minutes for Everton (d. Tottenham, 1-0) who have yet to concede a goal this season. Alanna Kennedy (Pride) and Shelina Zadorsky (Pride) started and played 90 for Tottenham. Alex Morgan (Pride) has yet to arrive… Jess Fishlock (Reign) covered the first 74 minutes for Reading in a 3-1 win over Aston Villa… Rachel Daly (Dash) was shown a yellow card in the 11th minute and then had the misfortune of being on the pitch for all 90 minutes and nine goals allowed by her West Ham side against Arsenal. Emily van Egmond (Pride) played the second half for West Ham.

Evelyne Viens (Sky Blue) was a 66th minute sub for Paris FC in a 2-0 win over Soyaux… Celeste Boureille (Thorns) went the distance for Fleury 91, 3-1 winners over Le Havre… Darian Jenkins came on in the 63rd minute in Bordeaux’s surprising 0-0 draw against PSG… Jodie Taylor (Reign) did not see the pitch for Lyon.

Emily Boyd (Red Stars) and Makenzy Doniak (Red Stars) both played the entire match for HB Køge who downed AGF 4-1. Boyd got the win in goal and Doniak had an assist off a defensive clearance… Machaela George (Reign) scored Fortuna Hjorring’s opener against Nordsjaelland on a recycled corner kick in the 6th minute, and went the distance in a 4-1 win.

Gunny Jonsdottir (Royals) started and finished Valur’s 3-0 win over Stjarnan. Erin McLeod (Pride) was the losing goalkeeper in that one.

Neither Carson Pickett (Pride) nor Cassie Miller (Red Stars) were listed on the team sheet for Apollon Ladies FC.