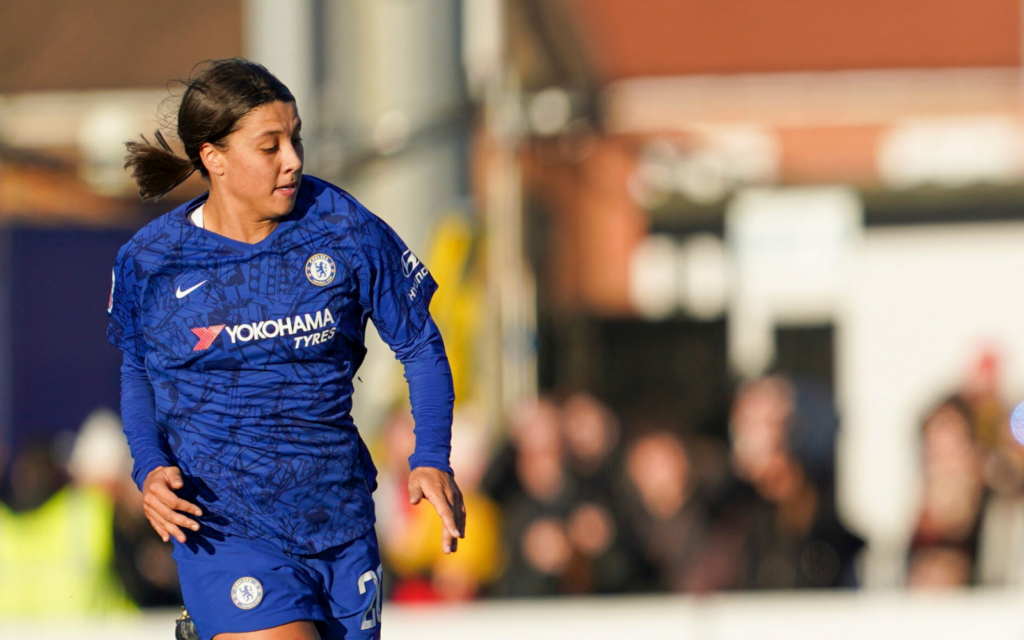 Week two in the FA Women’s Super League featured a number of lopsided matches and one surprisingly close match, as Manchester City was held scoreless by Brighton & Hove Albion, a team that finished near the bottom of the table last season. We have all the details on the weekend action, including debuts, goals and updates on the Americans in England.

Due to the upcoming international break, the next FAWSL match day is three weeks away on Oct. 4.

Despite recording 11 shots (four on target), Manchester City were not able to find the back of the net against a determined Brighton on Sunday. The chances were there: Georgia Stanway, Chloe Kelly and Ellen White were all able to get in behind Brighton’s back line on a number of occasions, but their attempts were either wide of the target or were blocked 1v1 by Brighton goalkeeper Megan Walsh.

City made a number of changes to their starting XI, as new signings Lucy Bronze and Alex Greenwood started on defense. The signing of Bronze in particular fills a role at right back that City were previously filling with Canadian Janine Beckie. Beckie, who is not a natural outside back but filled the role well last season, is now free to play in her usual position up top. She came on to replace striker Ellen White around the hour mark.

As for the Americans in City blue, Sam Mewis played 75 minutes before being subbed off for Jill Scott. In the second half, Greenwood was able to find Mewis who made a great run through Brighton defenders, but Beckie could not finish Mewis’ cross.

Rose Lavelle was not available for Sunday’s match, but did train for the first time with her new squad last Thursday after finishing up her two-week mandatory travel quarantine.

Last week, City’s two goals against newly promoted Aston Villa resulted from two bad defensive errors by Villa defenders, and they were not able to convert any of the other chances they created. So if we’re counting City’s goalless loss against Chelsea in the Community Shield at the end of August, they have scored just two goals in three games.

Is it too early to worry about City finding the net?

Manchester United came from behind to beat Birmingham City 5-2 and earn their first win of the WSL campaign. While United scored first in the opening five minutes of the match, first-half defensive lapses allowed Birmingham back into the match.

Just 30 yards out from her own goal, Katie Zelem turned over the ball to Claudia Walker, who was able to beat United goalkeeper Mary Earps for the equalizer. Birmingham then took the lead when United defender Abbie McManus deflected a free kick into her own goal.

However, Zelem redeemed herself with a perfectly taken free kick, which went up and over Birmingham’s wall to draw United level.

Zelem’s goal was the turning point in the match, as United went on to take advantage of some lax defending of Birmingham’s own. The Red Devils scored three unanswered goals in the second half, with Scottish midfielder Kirsty Hanson in particular giving a standout performance. Hanson assisted United’s winning goal and scored two insurance goals of her own.

United officially announced the signings of Tobin Heath and Christen Press last Wednesday. The Equalizer wrote about United’s tactics and how Heath and Press can help them challenge the big three of Arsenal, Chelsea and Manchester City.

Everton are two for two in the WSL so far, as a 51st minute goal by Isobel Christiansen gave them the 1-0 win over Tottenham on Sunday.

Despite losing their leading goal scorer Chloe Kelly to Manchester City in the offseason, Everton have still managed to find the back of the net so far in both games of their new campaign. New signings Claire Emslie — on loan from the Orlando Pride — and Hayley Raso are helping fill the void, as both were active Everton’s attack on Sunday, with Raso in particular recording a number of shots on goal.

With just one goal scored in two games, Spurs fans will be hoping that Alex Morgan — whose move to Tottenham was officially announced on Saturday — can provide a spark in their attack this fall.

Defenders Shelina Zadorsky and Alanna Kennedy, both on loan from the Orlando Pride, made their first starts for Tottenham and played a full 90 in the loss.

Chelsea had nine different goal scorers in their rout over Bristol City on Sunday, including the first goal for Pernille Harder in a Chelsea shirt. Just take a few minutes to watch her through-the-legs, back-heel goal on a loop:

It was also a special day for Fran Kirby, who scored her first WSL goal in 16 months. Kirby was diagnosed with pericarditis in November 2019, and as a result played in only four matches last season.

Canadian Jessie Fleming made her debut in 80th minute, replacing Kirby. Attacking midfielder Ji So-yun, who was profiled by The Equalizer last week, was awarded player of the match honors.

The 9-1 scoreline between Arsenal and West Ham doesn’t tell the whole story of this roller coaster of a match.

The match started as an end-to-end thriller, and West Ham striker Adriana Leon had the best opening chance for either team in the 9th minute. Leon intercepted an errant pass by Arsenal’s Jill Roord that was sent dangerously close to her own team’s 18-yard box. Her powerful half-volley forced a diving save out of keeper Manuela Zinsberger.

While both teams managed to score early, this one fell apart quickly. West Ham captain Gilly Flaherty received her second yellow card and was sent off in the 34th minute, just after Arsenal’s second goal. The second yellow was for dissent, as Flaherty was seen protesting the lack of an offside call on the goal with the assistant referee.

Down to just 10 players, West Ham fell apart defensively, and Arsenal scored seven unanswered goals in the remaining 55 minutes of the match. Roord had a hat-trick, while Dutch international Vivianne Miedema scored a brace.

Rachel Daly made her first start for West Ham and played 90 minutes, but her side couldn’t get anything going offensively in the second half after Flaherty’s sending off.

Reading’s first goal was quite the display, as Fara Williams, Angharad James and Amalie Eikeland combined nicely to find the net.

WoSo Around the World: PSG held to draw vs. Bordeaux
Analyzed: Manchester City’s scoreless draw, and the thin margin for error at the top