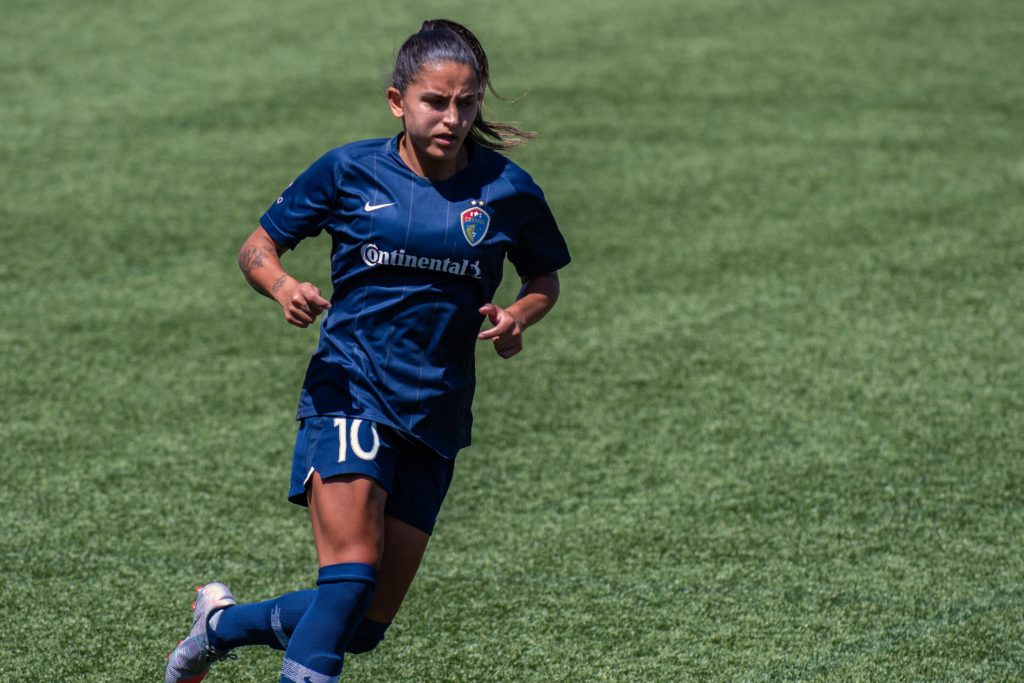 In a wild goal-fest from start to finish, the North Carolina Courage edged the Houston Dash 4-3 on Saturday in NWSL Fall Series action in Cary, North Carolina.

The Dash had a number of early chances, starting in the first minute of the match. Under pressure by Kristie Mewis, Courage midfielder Cari Roccaro turned the ball over on the edge of the box. Veronica Latsko picked up and the ball, but her shot was saved by keeper Stephanie Labbé, who was able to parry it wide.

Despite a strong start from the Dash, it was the Courage who scored the opening goal in the 18th minute. Dash defender Allysha Chapman took down Courage midfielder Debinha in the box and a penalty was awarded. Abby Dahlkemper converted the penalty for the 1-0 lead.

But the lead didn’t last long, as just minutes later goal-scorer Dahlkemper gave away the ball on the other end of pitch. Shea Groom forced the turnover, dribbled down the field, and served the ball to Latsko for the finish.

The Dash then took the lead in the 37th minute with some nice combination play between Groom and Mewis. Groom fought to keep the ball from two Courage defenders, and was able to play the ball off to Mewis wide. Despite the odd angle, Mewis’ shot was placed perfectly and beat Labbé.

Groom fights to keep this one and lays it off to Mewis who sends in the perfect finish 👌#NCvHOU | 1-2 | #NWSLFallSeries pic.twitter.com/h0DU7j3mtn

But it didn’t take long for the Courage to equalize in the second half. Receiving the ball from a throw-in, Debinha nutmegged Bridgette Andrzejewski, then sent an absolute screamer into the upper-90 of the Dash goal, beating keeper Jane Campbell in the process. Take a couple of minutes to watch this one a few dozen times:

Right after Debinha’s goal, Chapman earned a second yellow card for a bad challenge on Lauren Milliet and was sent off the pitch. The Dash would be forced to play the remaining 35 minutes of the match with 10 players.

Sophie Schmidt, who scored the winning goal for the Dash in the Challenge Cup, put her squad ahead in the 70th minute with a beautiful strike of her own to beat her countrywoman Labbé.

But as the remaining minutes dwindled, playing down a woman for half an hour finally caught up to the Dash. In the 83rd minute, Lynn Williams, who struggled to get the ball at her feet for long stretches of the first half, found the equalizer with a nice volley into the upper-90.

The goals didn’t stop there. In the 86th minute, the Dash could not clear a corner kick that was floated in, and Debinha was there with a one-time volley to give her side the 4-3 win.

After a multitude of transfers and loan deals sending a number of players out of the league during these unprecedented times, anyone still questioning the talent left in the NWSL for the Fall Series should look no further than the highlight worthy goals from this one.