Hope Solo should be in the National Soccer Hall of Fame. Period. 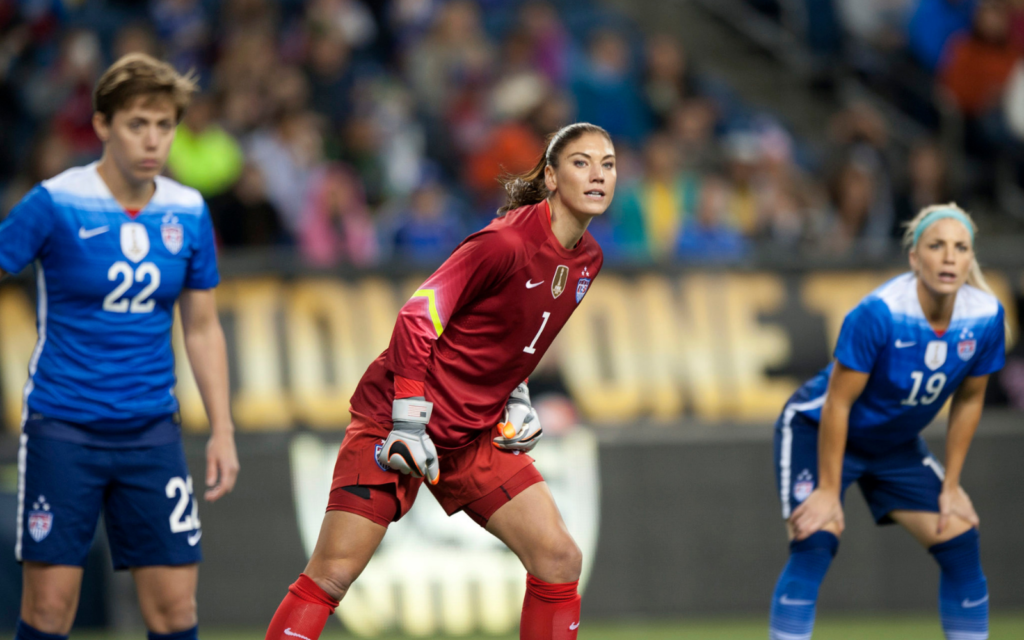 As a lifelong fan of most North American sports, I long ago gave up on trying to analyze and debate the worthiness of their respective Halls of Fame. From the pro football’s absurd rule that a minimum number of people get inducted each year to baseball’s constant tweaking to get players more and more avenues to get in, it just seems like a fruitless discussion. Until, that is, there is an oversight so egregious in nature that it serves to completely undermine the members of a specific Hall of Fame.

Hope Solo should be part of the National Soccer Hall of Fame. I consider myself fairly open-minded to constructive criticism and opposing viewpoints. But I cannot fathom there is a counterargument to Solo’s Hall of Fame candidacy that would move to even ponder it on my early morning walk.

There really is nothing about Solo’s career that falls short of what the average fan defines as being Hall of Fame-worthy. She was a terrific college keeper, a solid-to-excellent professional in three different leagues, and had success and sustainability with the United States national team.

It was with the national team where Solo really shined and made a name for herself. She was there as an alternate for an Olympic gold medal in 2004 and then started for subsequent gold-medal runs in 2008 and 2012. At the World Cup, she played in two finals, falling short in 2011 and winning in 2015. Sure it’s a team sport and not everyone on those teams is a Hall of Famer, but Solo was a key contributor on all of those teams. Her 2008 Olympic gold-medal match performance alone is worth space in soccer lore.

I believe that Hope Solo is the best female goalkeeper ever to play. Briana Scurry revolutionized the position with her reflexes, sensational hands, and take-charge presence in her 18-yard box. Solo took the position to another level with both her skills and mindset. Can you argue that Scurry was better? Or Nadine Angerer or Bente Nordby? Sure, and that would be a fun debate. But there is no dismissing Solo from the conversation entirely. For more than a decade, she defined the position in the United States, and to a large extent around the world.

Unfortunately, when Hall of Fame results were announced earlier this week, Solo had been named on only 57.3% of the ballots, about 10% short of the two-thirds requirement for enshrinement. That means more than two out of every five voters did not see fit to include Solo.

Explained: USWNT contracts, the NWSL, and the looming threat of Europe

In a vacuum, there could be some plausible reasons for omitting Solo. There could have been a long line of deserving players who had been waiting their turn. Some voters may be holding onto the now outdated and always asinine notion that no player should make a Hall of Fame on the first year of eligibility.

Neither of these arguments hold any water, however. Despite 57.3% of the vote, Solo finished third among players behind Carlos Bocanegra (who got in) and Steve Cherundelo (who did not). That means most ballots either included far less than the 10 maximum names or included many of the names that came in with lower percentages than Solo. As for the first-ballot phobia, well, I’ll just go ahead and hope that did not account for the difference.

So, why didn’t Solo get in? Is it more difficult to get in if you’re a woman? Someone reminded me that Abby Wambach was elected with 81% of the vote. Once someone is in the Hall of Fame, we rarely reference how or when they got in. They just become “Hall of Famer Abby Wambach.” That doesn’t make it any less mind boggling that 19% of voters somehow didn’t feel Abby Wambach, the world’s all-time leading international goal-scorer at the time, was one of the best to ever play. Or that 42.7% didn’t seem Hope Solo that way.

Should there be separate voting blocs for the women’s and men’s games? I could get behind that change. In some prior lifetime when I had a vote in this process, it was a challenge to try and decipher which men should get votes over the others. I follow the men’s game closely enough, but when hit with having someone’s legacy partly in your hands, it hits home how much your vote could mean. That said, no American man has ever been comparable as good as Solo at his position than she was at goalkeeper, or even close. I would like to think that I would have had an easy time checking the ‘yes’ box had that player presented himself on a ballot when I was voting for the Hall of Fame.

That leaves one more possibility. Hope Solo has led far from a perfect life off the field. She was suspended from the national team for 30 days when her husband snuck off in the team van in the middle of the night, Hope along for the ride. She was arrested and charged with domestic violence for an incident involving her half-sister and nephew. Those charges were dropped. She has been outspoken and brash, qualities not often seen in women athletes through the years.

No instance of being outspoken resonated more than 2007, when she was inexplicably benched for Scurry ahead of the World Cup semifinals against Brazil. After a 4-0 beatdown in which Scurry played poorly, Solo stopped in the post-match mixed zone and gas-lighted head coach Greg Ryan for his decision to change keepers. Scorned by a teammate breaking ranks from a team famous for rarely doing so, Solo was banished from the third-place match.

None of that should matter when it comes to deciding Solo’s Hall of Fame status. Halls of Fame all over the land are littered with good people and bad. Some were racist, some were rabble-rousers, some were just overall less than perfect citizens. Their play carried the day just as Solo’s should.

If anything, a deep dive into some of Solo’s poor behavior actually illustrates just how good she was at her craft. When Ryan was fired and Pia Sundhage took over, one of her first orders of business was to repair the rift between Solo and her teammates. A little more than a year-and-a-half after being suspended over the van incident, Solo was kicked off the national team for calling Sweden’s tactics cowardly during an Olympic quarterfinal the Swedes won on penalties. Reading between the lines, U.S. Soccer knew they needed her in 2015, and knew her time was up in 2016.

One of these years, Hope Solo will be voted into the Hall of Fame and from that moment forward we will call her ‘Hall of Famer Hope Solo,” and few will remember that she was so oddly and definitively snubbed in her first year of eligibility. But this one was too much to overlook.

Hope Solo should be in the National Soccer Hall of Fame.