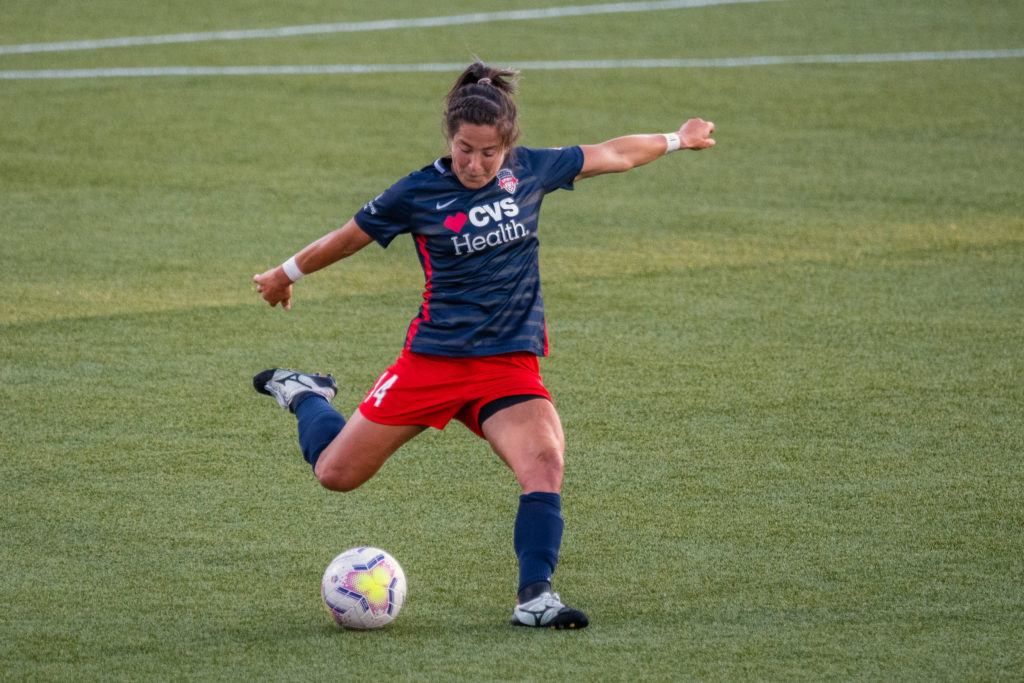 As the final minutes of the opener of the 2020 National Women’s Soccer League Fall Series ticked away, the Washington Spirit found a lifeline against Sky Blue FC.

Spirit forward Jessie Scarpa drew a foul inside the box on a collision with defender Erica Skroski in the 87th minute. Despite being down a goal, center back Paige Nielsen was confident her team would score. She was already thinking of how the Spirit would find the go-ahead goal.

“When it happened, I was looking around like, ‘Ok, we are going to score this,’” Nielsen said. “Then I was like, ‘Wait, who is going to take the PK?’”

After quickly surveying the field that included a Spirit side depleted by injury, Nielsen stepped up. Coach Richie Burke shouted down the field approving of the decision.

Prior to the Fall Series, Washington fell to Sky Blue in penalty kicks during the quarterfinal of the 2020 NWSL Challenge Cup. The Spirit’s more experienced spot kickers, Sam Staab and Bayley Feist, both missed that day.

Although Nielsen didn’t take a PK in the Challenge Cup, she did emerge as a top defender of the competition. In Utah, Nielsen stood out with the highest number of passes attempted in a single game (112 against Houston) and finished the tournament with a passing rate of 87.1% (324 of 371). The numbers backed up what was clear to the eyes for anyone watching the Spirit in 2019 and 2020: Nielsen is an important piece to this rebuilt era of the Spirit.

“I should have taken one in Utah and I didn’t,” Nielsen said on The Richie Burke show on Twitch. “Here was my time to pay this team back. “

Despite Nielsen’s equalizer in the Fall Series opener, Washington couldn’t overcome the inexperience of its rookies and the injuries to the game-day roster. Leadership was lacking and the midfield struggled mightily.

“The ball comes through our midfield and they score two times,” Burke said after the game. “It is just poor midfield play.”

Prior to the inaugural Fall Series, Burke was calling on players like Nielsen to lead in the absence of Huster and Sullivan’s on the field.

“It has been an interesting challenge for me because usually I have Andi in front of me and Tori to the right of me,’” Nielsen said on Twitch. “When they get in the game, I’m like ‘ah, I can relax.’”

Nielsen has come a long way since 2016, when she was selected 25th overall in the NWSL College Draft by then-Seattle Reign FC. She played a mere 26 minutes that season. In 2017, Nielsen began a three-year journey through four teams across the world playing both center back and forward before landing in Washington in 2019. It was a difficult journey — one which pushed her to the brink of quitting, she told The Equalizer earlier this year.

Paige Nielsen was ready to quit. Now, she’s integral to the Spirit’s rebuild

Last season, Nielsen started 22 of 24 games. Her excellence in distribution is one of the reasons the Spirit have been so successful in Burke’s attacking style of play that builds out of the back.

This season is a retooling year for Washington, and the Fall Series is a chance for Burke to evaluate young players for the future. But this season could also be a perfect crossroad for Nielsen to seize the opportunity to grow into a veteran leader.

“The next part of their progress is to take on board some leadership and some organizational stuff,” Burke said. “Aubrey [Bledsoe] is very vocal; Nielsen and Staab are going to have to adopt a little bit more of that role for us.”

While she admits there is room to grow, Nielsen seems ready to step up for the Spirit.

“I do see the game really well,” Nielsen said. “Now I need to work on communicating the way I see to them, especially with the defensive organizational piece… I need to be more confident in my own voice.”