WoSo Around the World: First kicks in England, France 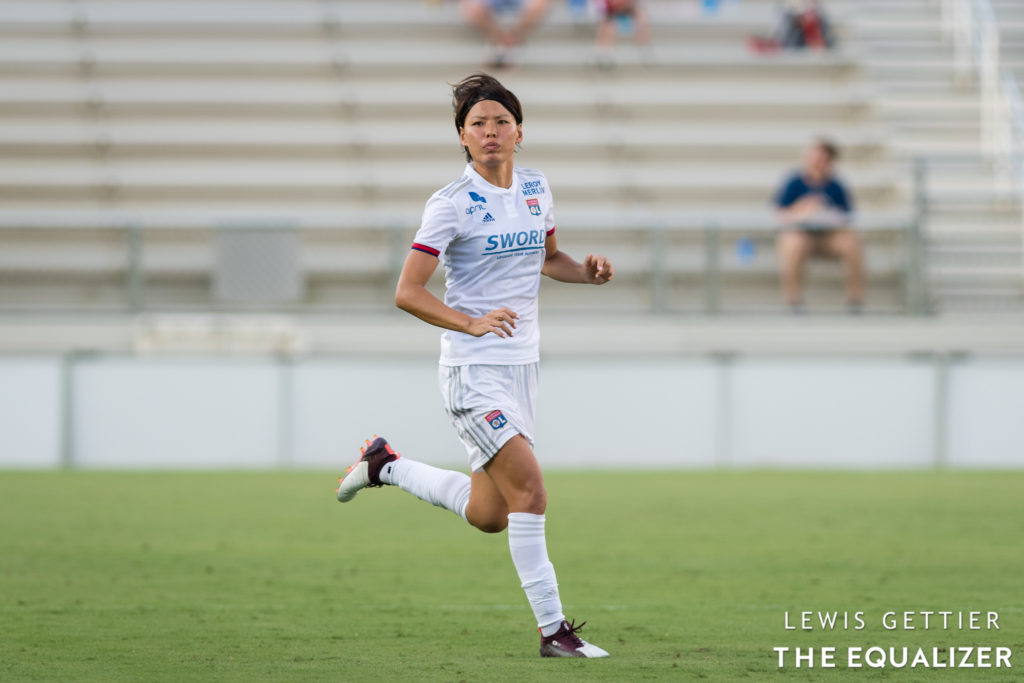 This is our weekly look at women’s soccer around the world. Each Monday, we will feature tables and short summaries from select leagues around the world followed by a review of performances by Americans and National Women’s Soccer League players participating in other leagues.

This will be in addition to roundups and analysis specifically covering the Women’s Super League in England, which we will be covering more extensively than ever this season. Read our league-wide season preview here.

The latest: Arsenal shot to the top of the table with a 6-1 win over Reading while a pair of Sky Blue alumni, Sam Kerr and Leah Galton, had the goals as Chelsea and Manchester United played 1-1. Sam Mewis played a solid match for Manchester City (d. Aston VIlla, 2-0) though her best moments were both called back by offside flags. Check out our full FA WSL weekend recap.

The latest: Perennial powers Lyon and Paris Saint-Germain opened with easy wins. Saki Kumagai had a double in Lyon’s 4-0 win over Paris FC and Kadidiatou Diani had a hat trick for PSG, who downed Guingamp 4-1. Both sides took a while to get going, with all of the goals from the two matches coming after halftime.

Le Havre earned themselves at least a week sharing the top of the table, scoring 4 minutes in away to newly promoted Issy on the way to a 4-0 win. The most exciting match of the weekend happened in Reims, where the hosts scored in the opening minute against Bordeaux only to go down 4-1 just after an hour. Reims then rallied for a 4-4 draw, with the equalizer coming from a Rachel Corboz penalty in stoppage time. Jamaican Bunny Shaw, one of the more popular players from recent Concacaf events, scored for Bordeaux. Reign loanee Darian Jenkins suited up for Bordeaux but did not see the pitch. Celeste Boureille, on loan from the Portland Thorns, was a 68th-minute sub for Fleury 91 in a 0-0 draw with Montpellier.

The latest: The top sides had few issues posting season-opening wins, led by Bayern Munich spreading the scoring wealth around to six different players in a 6-0 thrashing of SC Sand. Newly promoted Werder Bremen took a surprising early lead at Frankfurt when Maragrtita Gidion scored 15 minutes in. But two goals in two minutes put Frankfurt ahead 2-1 in the 35th and they rolled from there, winning 5-1. The other promoted club, Meppen, held Duisburg to a scoreless draw on the road.

Jess Fishlock (Reign) had a yellow card and a goal-line clearance in Reading’s tough FA WSL opener against Arsenal (and the honor of her name saying “Fischlock” across the back of her jersey)… Rachel Daly (Dash) and Emily van Egmond (Pride) were both second-half subs for West Ham United against Tottemham. Alanna Kennedy (Pride) subbed in late for Tottemham while Shelina Zadorsky (Pride) did not leave the bench… Claire Emslie (Pride) played the final 19 minutes for Everton… Rachel Corsie (Royals) was an unused sub for Birmingham City.

Emily Boyd (Red Stars) had the shutout and Makenzy Doniak (Red Stars) the goal after subbing in at halftime in HB Køge’s 1-0 win over Fortuna Hjørring in Denmark… Machaela George (Reign) played the first 70 minutes for Fortuna… Rachel Hill (Red Stars) assisted on the final goal in Linköpings FC’s 3-0 win over Umea in Sweden. Nicole Momiki (Reign) missed the match injured… Elizabeth Eddy (Sky Blue) assisted on the only goal in Vittsjö’s 1-0 win over Uppsala. Eddy served a long ball out of the back that was finished by Clara Markstedt. Rebecca Quinn went the full 90 for Vittsjö and wound up in the book.. .Another American was yellow carded in Sweden as Lindsay Agnew (Courage) played the opening 70 minutes in Örebro’s 0-0 draw against Vaxjo… Ali Riley (Pride), back at Rosengard, was subbed out in the 66th as her side routed Djurgarden, 3-0… Lauren Barnes (Reign) and Hailie Mace (Courage) both played 90 for Kristianstads, who defeated Pita 3-2… Emily Sonnett was on the team sheet but did not feature for Göteborg.

Erin McLeod (Pride) conceded twice but was still a winner, 3-2 for Stjarnan over Selfoss in Iceland… Gunny Jonsdottir (Royals) scored twice for Valur, helping her side to a 4-0 victory over ÍB Vestmannaeyja… In Finland, Kayla Sharples went all the way in KuPS Women’s 2-2 draw against Honka.

In Japan, Nahomi Kawasumi (Sky Blue) entered in the 62nd minute but could not prevent INAC Kobe from going down 2-1 to Albirex Niigata.