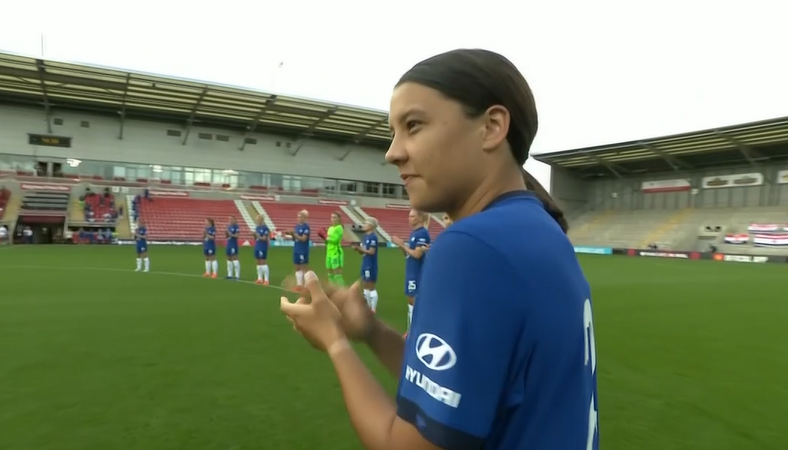 Tight matches and highlight-worthy goals marked the opening weekend for the 2020/2021 FA Women’s Super League, which featured a number of ex-National Women’s Soccer League players and NWSL players on loan. Miss any of the action? We have you covered with details and highlights from each match below.

United States international Sam Mewis made her WSL debut for Manchester City on Saturday, playing the full 90 minutes in her new squad’s 2-0 win over newly promoted Aston Villa. Rose Lavelle, who also signed a deal with City, was not available for Saturday’s match as she is still under mandatory quarantine after arriving from the States.

Genuinely cannot believe Villa did this twice in a half. Carbon copy howlers, same scorer and all. https://t.co/ep6q5llRZl

Mewis was active all over the field, setting up chances for her teammates throughout the 90 minutes she played. In the second half, she sent a perfectly weighted through ball to Canadian international Janine Beckie, who’s shot was saved. Mewis had two great scoring chances of her own, with a header that went wide of goal just 15 seconds after the opening whistle, and a shot that was blocked in the final minute of the match.

Despite the scoreline, this match was not a lopsided affair, as Villa had a number of scoring opportunities of their own, but lacked just a bit of quality to put one away. This competitiveness of this match was a great advertisement for the beginning of the new WSL season.

Sam Kerr scored the opening goal for Chelsea, the current WSL title holders, in a tight 1-1 affair with Manchester United. In the 25th minute, Fran Kirby sent a low cross into the box, and Kerr was able to find a way around her defender to poke the ball past keeper Mary Earps. Despite the goal, it was a bit of a rough game for Kerr, who created a number of great chances on goal but couldn’t put another away. Chelsea finished the game with nine shots, five of which were on target.

Jonathan Tannenwald of The Philadelphia Inquirer reported that Tobin Heath and Christen Press have officially signed deals to join United, negotiations of which were first reported by The Equalizer’s Dan Lauletta. They have not yet been announced by the team, but their inclusion will be a spark for the Red Devils, who have a bit of a thin bench right now.

Pernille Harder, who was wearing a Wolfsburg shirt just a week ago in the UEFA Champions League final, came into the match in the 80th minute, making her debut for Chelsea. Canadian international Jessie Fleming, who also recently signed with Chelsea, was on the bench but did not feature in the match. An interesting story line to follow this season for Chelsea will be how coach Emma Hayes is able to manage her deep bench of talented players and keep everybody happy.

Rachel Daly made her return to the WSL in West Ham’s 1-1 draw with Tottenham on Sunday. The striker, on loan from the Houston Dash through the rest of 2020, came onto the field for the second half.

Tottenham opened the scoring in the 53rd minute, when a corner kick taken by Lucy Quinn was mistakenly directed into the goal by West Ham defender Grace Fisk.

But in the 57th minute, Canadian international Adriana Leon scored a beautiful equalizer for West Ham, when she danced through the 18-yard box and sent her shot into the upper 90.

💥🚀 What a goal from Adriana Leon!!

This match was a bit of an unofficial reunion for Orlando Pride players on loan in England, as Emily van Egmond came on in the second half for West Ham, and Alanna Kennedy was a second-half substitute for Tottenham. Shelina Zadorsky, also on loan to Tottenham from the Pride, was available on the bench but did not feature.

Kim Little we are not worthy 🙌 #FAWSL pic.twitter.com/zmqnsvgpWx

On loan from OL Reign, Jessica Fishlock couldn’t find the back of the net for Reading in this one, but did get in a cheeky nutmeg in her return to the WSL.

It didn't take her long to whip out the nutmeg on her #BarclaysFAWSL return! pic.twitter.com/DPUEFzXTv4

Who doesn’t love a back-heel assist? (Looking at you Shea Groom and Ashley Sanchez!) In the opening seven minutes of the match against Bristol City, Everton’s Lucy Graham sent a cool back-heel into the air in the direction of Simone Magill, who was able to hit her one-time volley into the back of the net. Everton put this one away with second-half goals by Graham, Rikke Sevecke, and Valérie Gauvin.

Over an hour into their match against Birmingham City on Sunday, Brighton were finally able to find the back of the net. Receiving a pass on the edge of the box, Megan Connolly floated her shot perfectly over Birmingham keeper Hannah Hampton. Just two minutes later, Inessa Kaagman added a second for Brighton, who are looking to improve upon on their ninth-place finish last season.