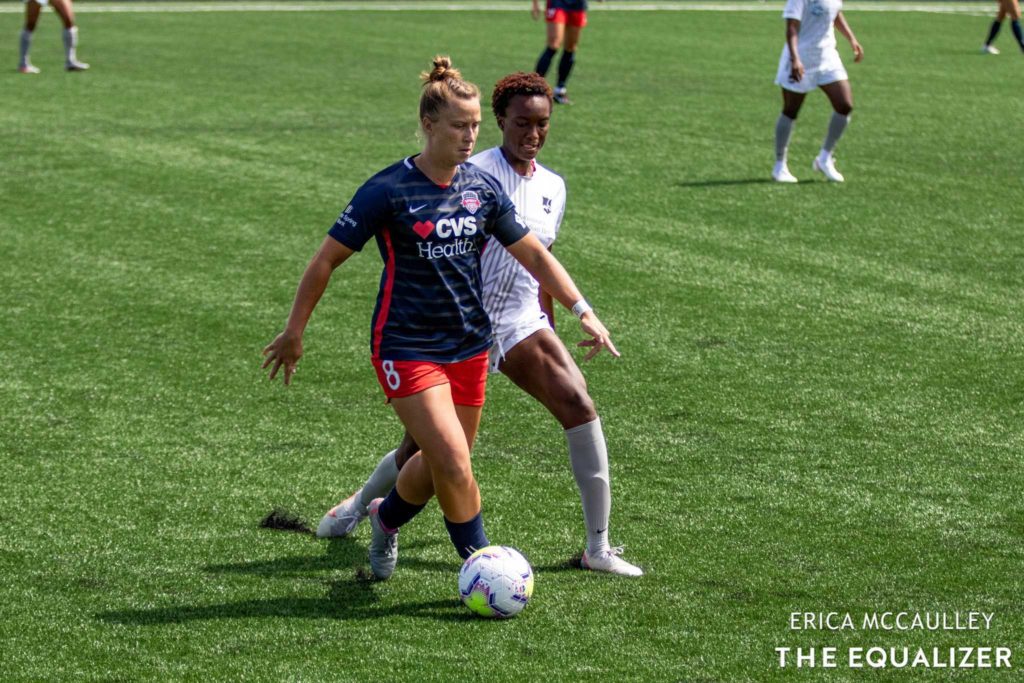 On Saturday afternoon at Segra Field in Virginia, visiting Sky Blue FC beat the Washington Spirit 2-1 to kick off the NWSL Fall Series. Nationally televised on CBS, Sky Blue goals by Ifeoma Onumonu and Midge Purce made it a lively restart for the league after the success of this summer’s Challenge Cup.

Sky Blue were on the front foot in the first half, and got on the board early in the 18th minute. Not quite up to the pace of the game yet, Spirit defender Sam Staab held onto the ball at her feet for too long, and Onumonu was able to steal it from right under her. The Sky Blue forward dribbled to goal, and her shot beat Spirit keeper Aubrey Bledsoe in the upper right corner.

A bit too relaxed at the back for the Spirit…pic.twitter.com/lAvWrN007u

Midge Purce almost added a second goal for Sly Blue just before the half. Purce, who created problems on the left and right in the first half, cut onto her right foot in the box, and fired a shot that hit the post. She followed up her own rebound and got another shot off, but it was blocked by Spirit defenders for a corner. Purce was played as a forward today for Sky Blue, a change from her position at right back during most of the Challenge Cup.

In the 61st minute, Mallory Pugh made her long awaited debut for Sky Blue. Pugh was traded from the Spirit to Sky Blue in January, but missed the Challenge Cup this summer with a hip injury. Pugh got involved as soon as she entered the match, running in behind the Spirit defense and getting a shot off on a number of occasions.

However, it was the Washington Spirit who leveled the score in the 89th minute. Substitute Jessie Scarpa was tripped in the box by Sky Blue defender Erica Skroski, and a penalty kick was awarded. Paige Nielsen took the penalty for the Spirit, and slotted her shot perfectly in the bottom left corner, beating keeper Kailen Sheridan.

However, this match didn’t stay level for long, as Sky Blue pushed for the winner in the final minutes. Pugh was able to send a perfectly weighted through ball to Purce, who made no mistake with her finish. She calmly poked her shot passed Bledsoe to give Sky Blue the winner.

The goal came just moments after Purce sent a through ball to Pugh, who hit the post with a shot of her own, highlighting the dynamic connection these two players showed with just half an hour on the field together.

The NWSL community continues to show up and give back
Pugh, Purce key new look Sky Blue front line