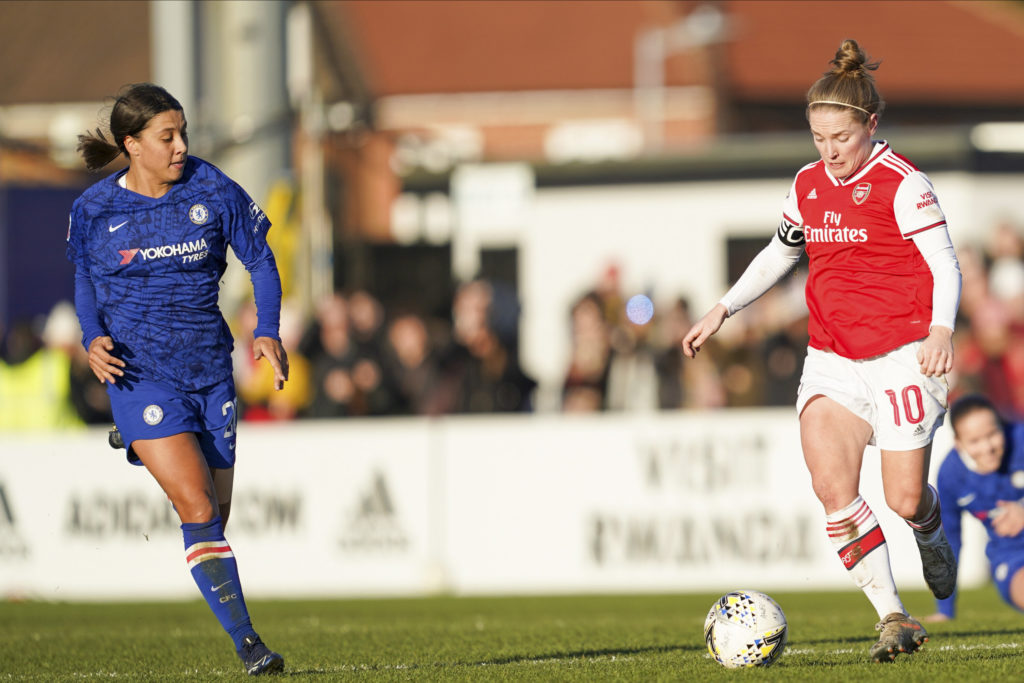 The 2020-21 Football Association Women’s Super League campaign kicks off this weekend, with 50 games set to be shown on NBC Sports this season in the United States. The Equalizer will be covering the WSL more extensively than ever this season. Make sure you have a membership to The Equalizer Extra to get all of our premium content and member exclusives.

Here, we break down what to look forward to this season: the stars, the unsung heroes, the prospects, the potential winners, the potential losers, and those looking to improve.

Who will win the title?

Reigning champions Chelsea are in a strong position to retain their title, having significantly bolstered their squad with the signings of gifted young Canada midfielder Jessie Fleming, German international Melanie Leupolz and star Danish forward Pernille Harder from Wolfsburg. Harder’s arrival was particularly big news, and it will be interesting to see how manager Emma Hayes deploys her.

Hayes may well go with Harder and Guro Reiten behind a front two of natural No. 9s in Sam Kerr and Bethany England for most domestic matches, which is a scary proposition for opposition defenses. With this level of individual talent combined with Hayes’ pragmatism, they should be too much for their rivals.

Arsenal lost out on the title last (shortened) season primarily because of their defensive failings, so it’s no surprise their recruitment has focused on strengthening this area. Goalkeeper Lydia Williams should provide a more commanding presence behind the back line, while Steph Catley and Noelle Maritz ensure greater depth in the fullback positions.

Manager Joe Montemurro is unlikely to change his philosophy, however. With positional rotations and combination play centered on Vivianne Miedema’s interactions with Kim Little, Jordan Nobbs and Danielle van de Donk, Arsenal will continue to score goals. It’s whether they can keep them out that will define their title chances.

Manchester City have the finest collection of midfield talent in the league thanks to the arrivals of Sam Mewis and Rose Lavelle to complement Keira Walsh and Caroline Weir. They aren’t struggling for quality elsewhere, either: their defense is led by England captain Steph Houghton, and new signing Chloe Kelly will add skill, speed and goals to an attack already featuring Ellen White and Lauren Hemp.

However, unlike Arsenal and Chelsea, they don’t have a proven manager. Nick Cushing departed last season, with Gareth Taylor since taking the reins. City have talent at their disposal, but the sheer amount of change may mean the title is just beyond their grasp this season.

Rose Lavelle is ready to be challenged at Manchester City

Who is set to improve?

Chloe Kelly may have left, but Everton have done their best to replace her goal threat. Valerie Gauvin, who led the line for France at the 2019 World Cup, was brought in from Montpellier, while Claire Emslie arrived on loan from the Orlando Pride. Hayley Raso, who joined last season but didn’t play due to injury, can also play a big role in filling the void left by Kelly’s departure. Everton finished sixth last season, but if the new-look attack clicks, they may have Manchester United and fourth place in their sights.

West Ham United aren’t looking at a top-four finish, but an improvement on last season’s eighth place is definitely feasible. They’ve made some interesting additions in Czech footballer of the year Katerina Svitkova and twice-capped French defender Hawa Cissoko, but the big deal is the loan signing of Rachel Daly. Fresh from her heroics in the Houston Dash’s NWSL Challenge Cup victory, Daly will be looking to demonstrate her abilities as a No. 9 in her home country, at least for the rest of 2020.

Kickin’ Back with Jess Fishlock

Who will be battling relegation?

Newly promoted Aston Villa are in a good position to stay up. Following promotion, they brought in former Chelsea, Arsenal and Sky Blue center back Anita Asante, former Lyon goalkeeper Lisa Weiss, and Scottish international midfielder Chloe Arthur, all of whom should help them defensively. And going forward, there is considerable intrigue as to how Portugal’s Diana Silva and Denmark’s Stine Larsen fare in their first season’s in English soccer.

The two teams most likely to struggle are Birmingham City and Bristol City, who both narrowly avoided the drop last time out. The difference between the two may be that Birmingham have lost a lot of experience. Kerys Harrop and Rachel Williams left for Tottenham Hotspur, Arthur and Lucy Staniforth joined Aston Villa and Manchester United respectively, while Bri Visalli and Adrienne Jordan returned to NWSL. Rachel Corsie’s loan signing may not be enough to keep them up.

Who are the stars on show?

Pernille Harder is the latest world-class player to make the FAWSL her home. Her ability to find space, dribble past defenders and score as well as create goals should improve a Chelsea attack already brimming with firepower.

Speaking of firepower, since joining in January, Sam Kerr has not quite shown her best form for the champions. However, with the likes of Harder, Guro Reiten and Ji So-yun supplying her, Kerr won’t lack for chances. Assuming Chelsea can get the strike pair of Kerr and Bethany England working effectively together, last season’s most productive attack will score even more goals.

If Kerr is setting herself a benchmark for goals, Vivianne Miedema would be a good place to start. The Dutch forward has been the top scorer in each of the last two FAWSL seasons, finding the net 38 times in total in that period. She will be fundamental to Arsenal’s hopes of wresting the title back off Chelsea.

Manchester City can now compete with Chelsea and Arsenal in terms of pure star power thanks to the signings of Sam Mewis and Rose Lavelle. Mewis, with her physicality and ability to contribute defensively and offensively, should settle quickly, while Lavelle could reasonably aim to hit double figures for goals if given a No.10 role behind Ellen White.

Also to watch: U.S. internationals Tobin Heath and Christen Press are close to finalizing season-long deals with Manchester United, as first reported by The Equalizer’s Dan Lauletta. They are sure to bring equal attention — at least from the U.S. — to the other side of Manchester.

Who are the unsung heroes?

Dutch international Jackie Groenen is the big name in Manchester United’s midfield, but in truth their possession flows through Katie Zelem. The 24-year-old shows for the ball and gets on the half-turn well, and also has an excellent passing range. Another good season should see England caps follow.

For pure entertainment, Fara Williams is a player to watch. At 36, she now plays as a No.10 behind a lone striker for Reading, where her outstanding one-touch play can open up opponents in transition. It’ll be worth keeping tabs on how she and loan signing Jess Fishlock work together in midfield.

Sophie Ingle is perhaps the most underrated player in the league, mainly because she is surrounded by bigger names at Chelsea. Kerr, Harder, England and Reiten produce assists and goals, but Ingle does the dirty work: pressing, intercepting and passing accurately to her renowned teammates.

Who are the best prospects?

Hannah Hampton will have a key role as Birmingham’s goalkeeper, but the 19-year-old is ready for the responsibility. She already has two years’ first-team experience under her belt and travelled with the England squad for this year’s SheBelieves Cup to aid her development. Having started out as an attacker, she also has the on-ball qualities expected of a modern ‘keeper.

Tottenham Hotspur have a number of exciting young players in their ranks, though Chloe Peplow may just be the best of the lot. Playing at the base of midfield, the 21-year-old not only breaks up opposition attacks, but is capable of opening defences with a pass.

If Bristol City are to avoid relegation, they may need continued development from striker Ebony Salmon. The 19-year-old scored five goals in under 800 minutes on the pitch last season, showcasing real pace and dribbling skill. As well as goals, she offers a threat in behind on long balls or counterattacks.