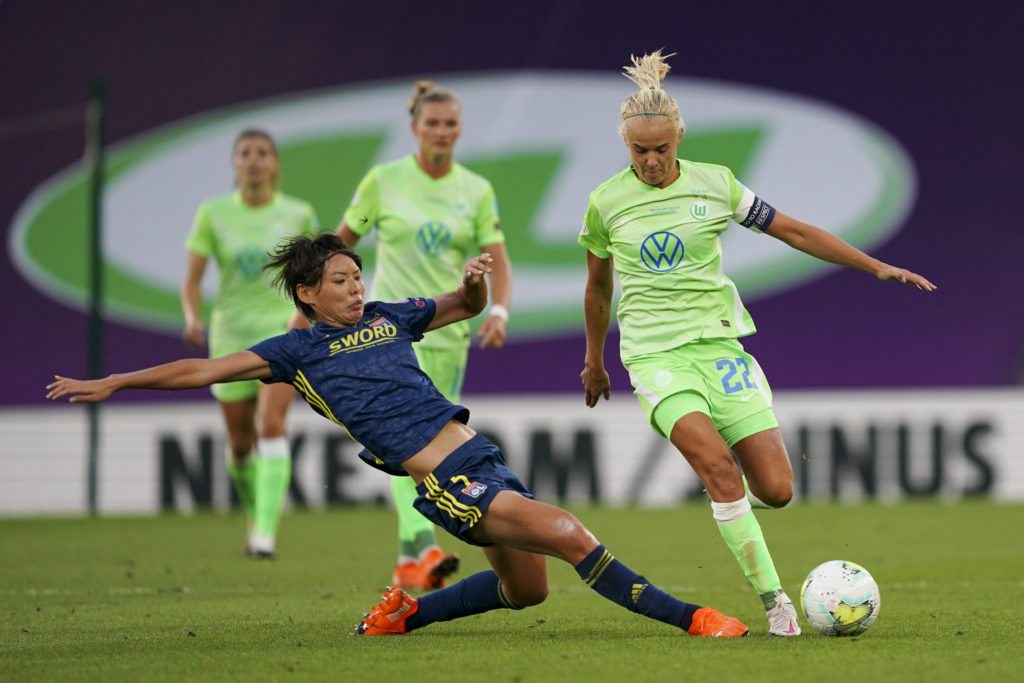 On Sunday at the Anoeta Stadium in San Sebastian, Spain, Lyon beat Wolfsburg 3-1 with goals by Eugénie Le Sommer, Saki Kumagai and Sara Gunnarsdóttir. After a dominant first half performance by Lyon, Wolfsburg made a comeback attempt in the second half. However, the German club could only pull one goal back. It was the third meeting between these two teams in the UWCL Final in five years.

Each team made a few key personnel changes from how they lined up in the semifinals. Most notably, with Nikkita Paris suspended due to her red card against Paris Saint-Germain, Lyon brought in veteran forward Le Sommer.

The first chance of the game came in the 7th minute, when Dzsenifer Marozsán sent in a floated free kick towards Wendie Renard. Renard, who scored Lyon’s semi-final goal with her head, couldn’t find the net this time, as her header sailed back across goal and off target.

Wolfsburg struggled to keep up with the pace and press of Lyon in the first half, and Lyon’s strong start was rewarded in the 25th minute. Delphine Cascarino cut the ball back near the byline and sent a cross in towards Le Sommer who was arriving in the box. Le Sommer’s first shot was blocked by Wolfsburg keeper Friederike Abt, but Le Sommer’s determination was unmatched, as she followed up her shot. Beating two Wolfsburg defenders, Le Sommer buried her own rebound past Abt for the lead.

GOAL, @OLfeminin! Eugénie Le Sommer grabs the rebound from her initial shot and slips the second attempt past Friederike Abt. #WOLOL | 0-1 | #UWCL pic.twitter.com/RYFyEq1i9Q

Lyon’s dominant performance continued before the halftime whistle. In the 44th minute, Wolfsburg’s inability to clear a cross by Cascarino caused problems. With the ball at her feet, Lyon’s Amel Majri found Kumagai on the edge of the area, whose beautiful strike found the bottom right corner of the goal.

And what a goal that was from Saki Kumagai! That's another tally for Lyon shortly before halftime! #WOLOL | 0-2 | #UWCL pic.twitter.com/sKa3LqS0dX

However, Wolfsburg seemed to up their intensity in the second half, as they committed more players forward, pressed in more areas of the pitch to win the ball, and were able to pull a goal back. In the 58th minute, Lyon keeper Sarah Bouhaddi could not hang onto a cross by Fridolina Rolfö. Ewa Pajor crossed the rebound to Alexandra Popp, who headed it into the back of the net.

That's a goal for Wolfsburg as they begin to make their comeback. Alexandra Popp finds herself at the right place at the right time! #WOLOL | 1-2 | #UWCL pic.twitter.com/1HUrneyuZG

Wolfsburg pushed for an equalizer for the remaining half-hour of the match, but it was Lyon that showed their class and scored a third goal in the 88th minute. Gunnarsdóttir redirected a shot by Le Sommer — with her heel — towards goal, and was able to beat Abt.

Sara Gunnarsdottir scores what could be the nail in the coffin for Wolfsburg. What a back-heel! #WOLOL | 1-3 | #UWCL pic.twitter.com/oqhH2XHcCt

A dominant Lyon are champions of Europe once again. This is the club’s seventh overall victory in the UEFA Women’s Champions League.