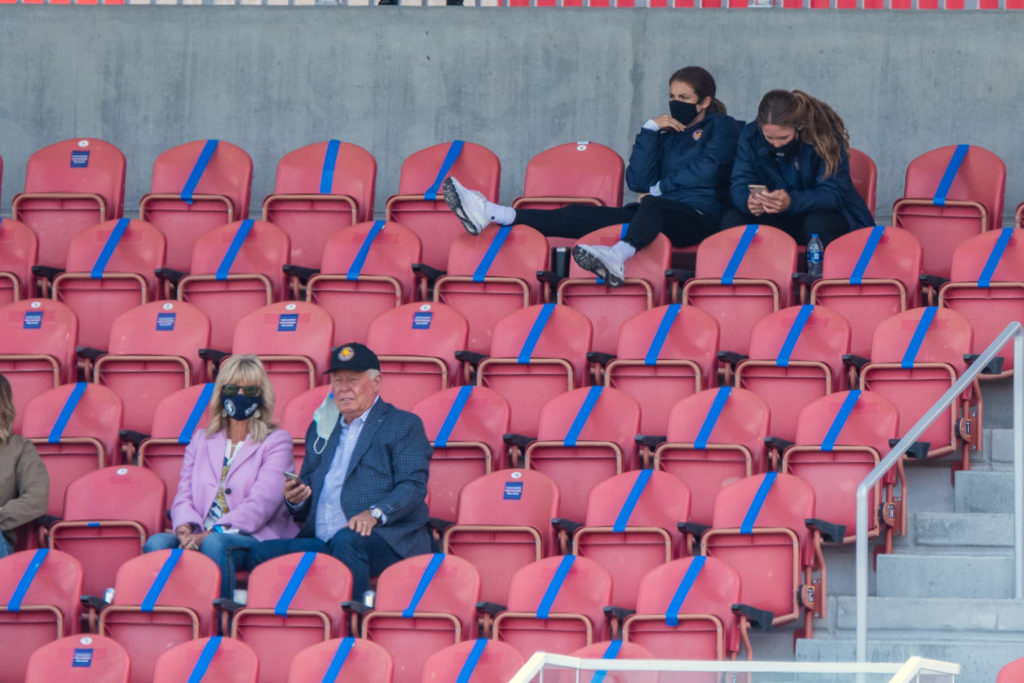 Utah Royals and Real Salt Lake owner Dell Loy Hansen is under investigation by the National Women’s Soccer League and Major League Soccer following allegations of sustained racist behavior. The club announced on Friday that Hansen has taken a leave of absence from operations during the investigations.

Details of Hansen’s behavior came to light in a Thursday article published by The Athletic, following Hansen’s appearance on a local radio station in which he disagreed with Real Salt Lake players’ decision not to play Wednesday’s game. Five MLS games, along with many NBA, WNBA and MLB games were called off after players across the U.S. sports world refused to play on Wednesday night in solidarity with the Black Lives Matter movement, following the shooting of Kenosha, Wisconsin, man Jacob Blake, who is Black, on Sunday.

Real Salt Lake was scheduled to play at home LAFC at home on Wednesday in front of up to 5,000 fans, a limited capacity approved under state guidelines as Utah phases re-opening of business amid the COVID-19 pandemic. Hansen said on Thursday that he did not stand with the players’ decision, citing the financial implications on his organization. He also suggested that Wednesday’s events made him lose interest in investing in the team.

“It’s a moment of sadness,” Hansen said on a radio show, on a station which he owns. “It’s like someone stabbed you and then you’re trying to figure out a way to pull the knife out and move forward. That’s what it feels like. The disrespect was profound to me personally.”

Hansen went on to say that he would have to cut 40-50 jobs again on Monday. His organization furloughed an unspecified number of employees earlier this year as MLS, NWSL and USL seasons were postponed due to the COVID-19 pandemic (Hansen is also the owner of USL Championship side Real Monarchs).

“I’m sadly disappointed that we didn’t weigh the effect for $12/hour employees, who we shook hands with an hour later and said you won’t have a job here,” Hansen said in the interview, which was removed and then re-uploaded on Thursday. He later apologized in a second interview on another station on Thursday. The full transcript of the first interview can be found here.

NWSL commissioner Lisa Baird and MLS commissioner Don Garber each rebuked Hansen’s comments on Thursday as reports began surfacing that MLS was looking into removing Hansen’s rights to the RSL franchise (both leagues are single entity and team ‘owners’ are investors/operators of teams).

Then came a report from The Athletic, which detailed stories from multiple sources who spoke on the record about years of racist comments and behavior from Hansen. The sources who spoke are current and/or ex-players and staff from Real Salt Lake.

Andy Williams, a former RSL player who served as the club’s head scout from 2011 until he was furloughed earlier this year, compared Hansen to Donald Sterling, the former LA Clippers owner who was removed from that role and banned by the NBA after racist recordings were made public. Williams recounted a 2016 story of Hansen speaking to Kellyn Acosta, a Black player who had scored the game-winning goal for FC Dallas the night prior against RSL, and Hansen joking. “When are we gonna lynch this guy?” Two other sources corroborated that story to The Athletic.

That reporting prompted further statements from the NWSL, MLS and its players associations, on top of several personalities across soccer and the sports world demanding Hansen’s removal. Toronto FC and United States men’s national team forward Jozy Altidore tweeted that he had an investor group ready to take over.

The Utah organization released a statement on Friday saying that Hansen will take a leave of absence for the duration of the investigations. During that, the club’s soccer executive group will manage the organization. The statement read:

“As MLS and NWSL commence their investigations, Utah Soccer will ensure full cooperation, including seeking to answer any questions the leagues may have about the statements made by Mr. Hansen regarding athlete boycotts and allegations in a resulting article. As an organization, our priority is our employees, our teams, our players, and our fans, and Mr. Hansen in particular cares deeply for each of these individuals who works so hard to make Utah Soccer the success that it is.”

Utah Royals rookie Tziarra King tweeted that the comments of her team’s owner were “completely unacceptable.”

Any player’s hope is to be in an environment where they are fully supported not only as a player, but most importantly as a person. For DLH to take this very real situation for the black community, and try to turn it around and make it about himself is completely unacceptable. 1/

Messages about inclusion and diversity are in complete contradiction with an owner who refuses to understand the relevance of a player strike for racial equality. I’m disappointed, but not surprised, by the lack of understanding in this situation. 2/

One thing I’m absolutely not going to do is use his privilege as an excuse for his comments. I hope that people, in this club and beyond, will choose accountability and empathy moving forward. I stand in complete solidarity with the decision of RSL players. 3/3

Hansen was lauded by the NWSL earlier this year for making the Challenge Cup happen. The NWSL became the first team contact sports league to return to the field in the U.S. by utilizing facilities and companies owned by Hansen, including Zions Bank Stadium and Rio Tinto Stadium, as well as the organization’s training fields and academy facilities. Utah hotels which Hansen owns were also used to help make the month-long Challenge Cup financially possible for the NWSL.

No fans attended that tournament, which limited revenue to TV and sponsorship. Hansen has pushed to get fans back in his stadiums sooner rather than later, including making Real Monarchs the first team among those in the USL, MLS and NWSL to have fans at a game, in July.

Hansen purchased the operating rights to the Utah Royals in late 2017, when the NWSL was on fragile ground. FC Kansas City, the league’s two-time champions, folded after the 2017 season, and the Boston Breakers eventually folded in early 2018 after a prospective ownership group fell through. Utah’s arrival mitigated some of that contraction; FC Kansas City players’ rights were transferred to the Royals organization.