The National Women’s Soccer League Challenge Cup came to a close with a historical win by Houston Dash after an intense month-long tournament. In between, Fans worldwide were treated with merchandise release of Racing Louisville, the NWSL’s next expansion team only to be followed by the exciting announcement of Angel City joining the league in 2022.

A day before the Challenge Cup opening match the NWSL announced a new partnership with Google. The tech giant has many products and tools and there’s one that can provide unique insights into what NWSL fans are searching for, Google Trends. The tool allows any user to insert search terms and in return to get search data by, popularity, geography and related queries (more on that later).

The results are demonstrated on popularity rank between 0-100. 100 means that a term is at peak popularity for searches whereas 0 means there was not enough data. Anything in between gives us an indication of how popular it is for an examined period.

We analysed what fans worldwide searched about the league and compared peak moments to real-life events.

Some of our analysis excludes USA and Canada data in order to focus on international markets as this is where the NWSL is seeking to grow its brand. Evidently, through its international broadcast deal with Twitch. The analysis reviews 30 days (06/27/2020-07/27/2020) starting with the tournament’s opening day and concluding a day after the final.

The first indicator we’ll look at is interest by region. This indicator shows which countries searched for the term “NWSL” the most. On the tournament’s opening day (06/27/2020) the following countries stood out: 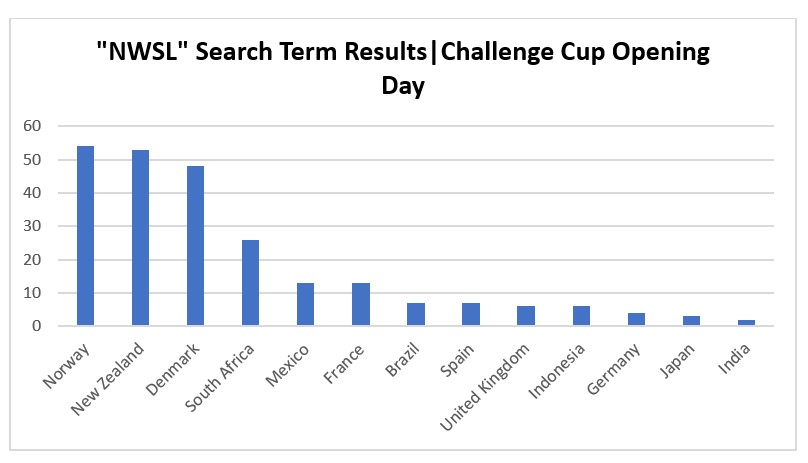 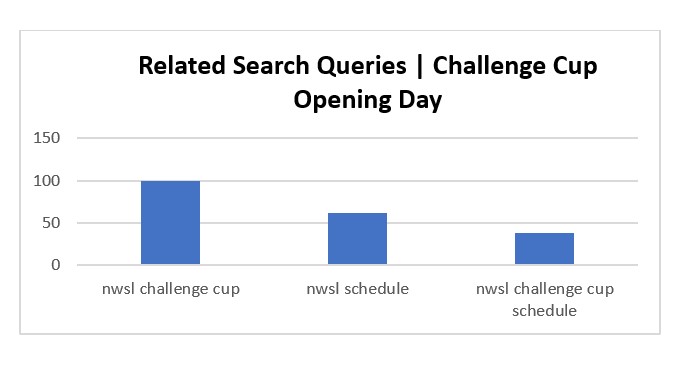 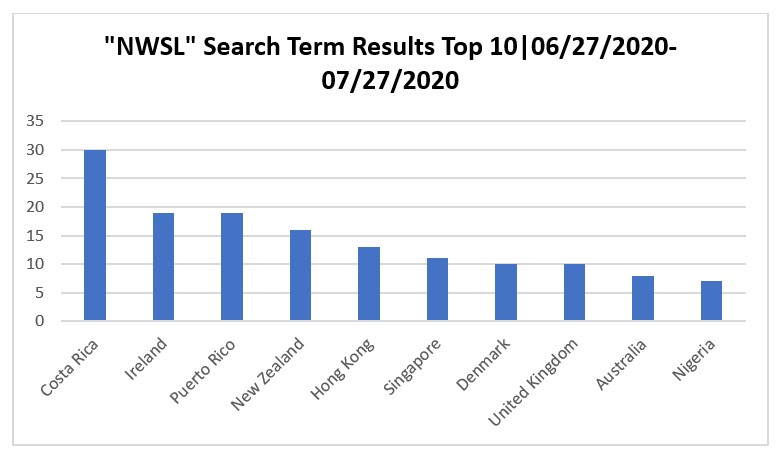 And related queries over the course of the month worldwide present the following: 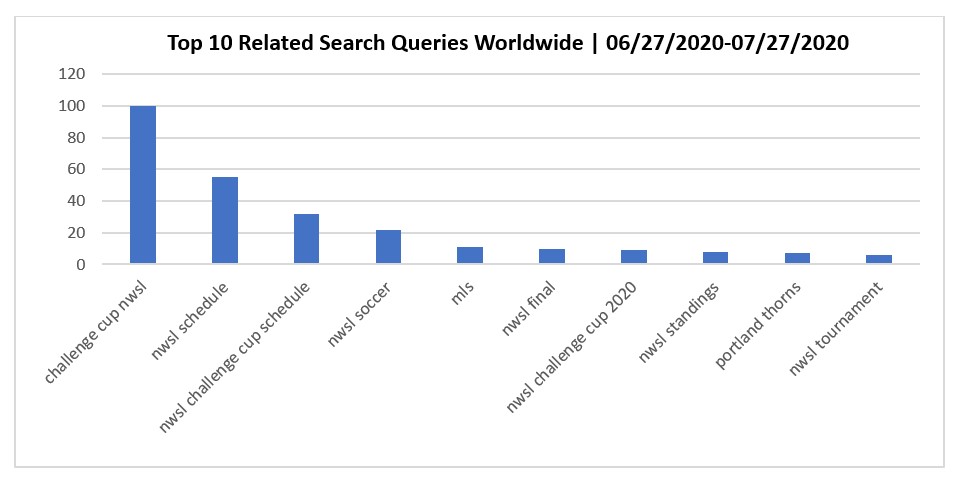 Moving on to the highlight of the tournament, the NWSL Shop. The shop wasn’t open from day one and as far as we understand it opened on 07/15/2020. 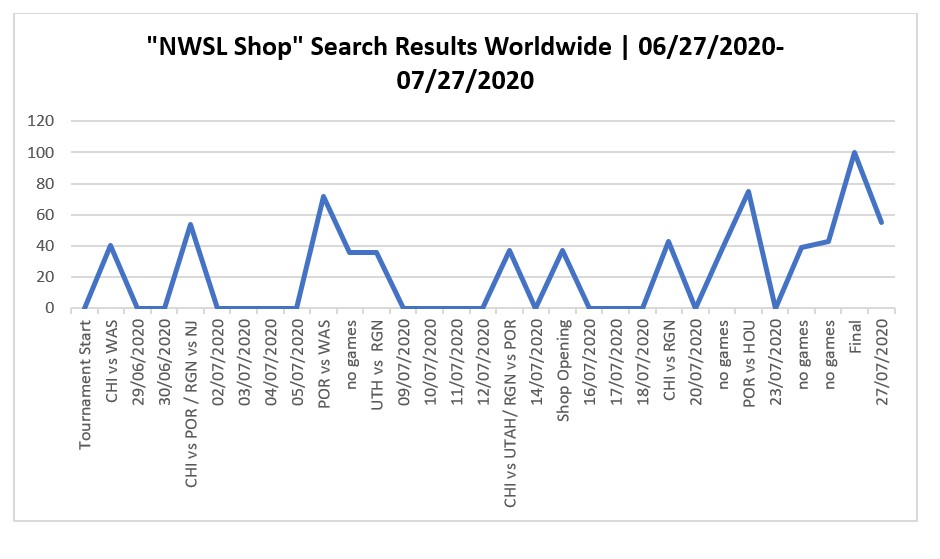 Interestingly, out of 14 peak search moments (value larger than zero) the Chicago Red Stars featured in five of them, more than any team. Although Portland Thorns and OL Reign are close behind with four peak moments features. Some of those peak moments are shared as there were two matches on those days.

Diving deeper into “NWSL Shop” search data by region it is evident that the majority of searches came from Illinois. 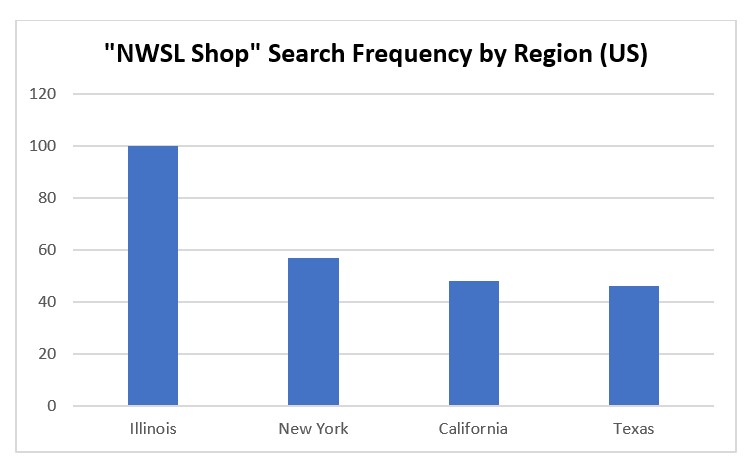 An international NWSL fan might search “NWSL twitch” and for this term we get a different picture. Note, searching for “twitch NWSL” doesn’t generate significant data internationally. 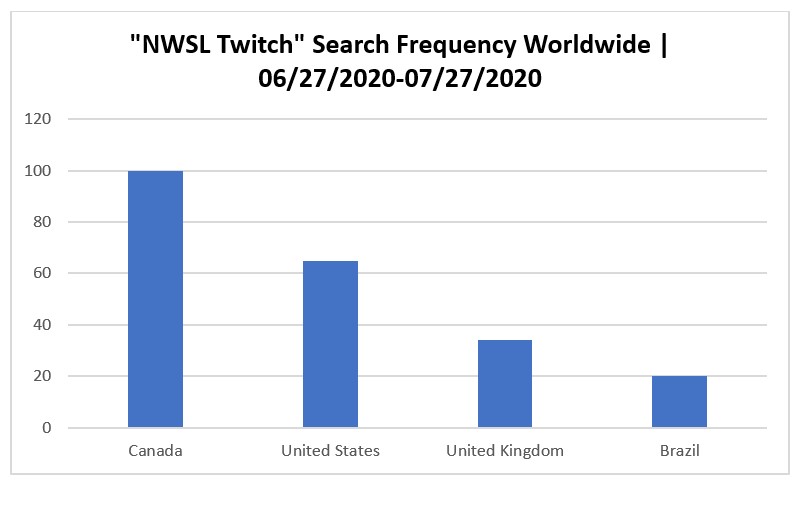 Canadians wanted to know whether they can watch on Twitch and save themselves the cost of a CBS All Access subscription. When examining the UK in more detail Google data reveals two search peak moments, the opening match and the final with a frequency of 100 and 76 respectively, all from England.

Whether you’re a fan that followed the broadcasts or got your updates via social media (or both) there was no ignoring the involvement of NWSL’s partners such as Budweiser Woman of the Match and the Secret virtual watch party powered by Google Hangouts throughout the tournament.

Unfortunately, Google Trends lacks any significant data to draw insights from about the relationship between the league, commercial partners and fan searches. But that’s why the partnership is in place, to really zero in with more advanced tools to identify further opportunities.

The phrase search term frequency was thrown a lot in this analysis. It is important to mention that zero frequency or no data doesn’t mean there aren’t any searches from those regions or for certain terms. It means that the data is too small for it to be included on Google Trends.

Let’s close with a brain teaser, could Google search data over a long period of time help predict the next expansion market for the NWSL? Imagine uncovering a large proportion of NWSL expansion related search terms consistently from a certain region. This will indicate there’s potentially strong fan interest in that region. The next graph might help:

It shows fluctuations in searching for the term “NWSL expansion” over the past five years in the USA. What’s the only region that appears in the data you may ask? California. We’ve seen you coming Angel City?