Possession game not enough for Barca in loss to Wolfsburg 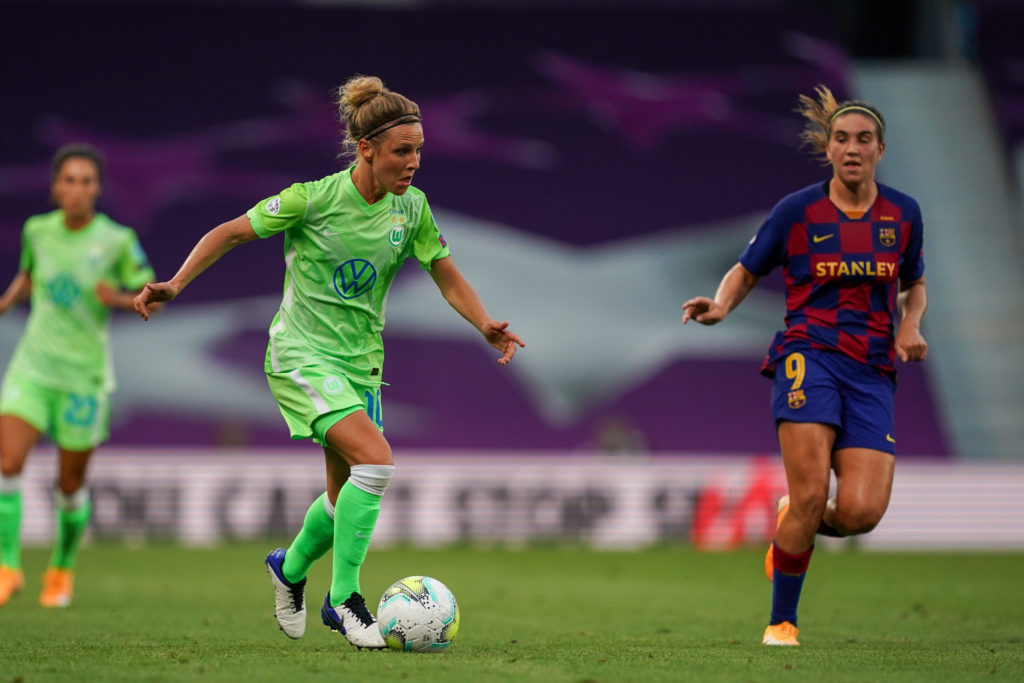 In a meeting of German and Spanish champions on Tuesday night, Wolfsburg defeated Barcelona 1-0 to reach the UEFA Women’s Champions League final, where they will meet either Lyon or Paris Saint-Germain.

This was a fascinating semifinal clash, not least because it saw two markedly different tactical approaches collide. Barcelona played their usual possession game, trying to play through the thirds and combine to create clear-cut chances. Wolfsburg were more direct and adaptable, relying on their physicality and individual quality.

Wolfsburg lined up in a defensive 4-4-1-1, with Pernille Harder playing behind Ewa Pajor up front. Without a high press from their opposition, Barca could dominate possession and their center backs had time to pick passes and break the lines. They were helped in this pursuit by a surprise selection from Head Coach Lluis Cortes.

Lieke Martens may be one of the finest wingers in the world today, but she was left out of the team as Cortes instead picked Spanish international Mariona Caldentey on the left flank of his fluid 4-2-3-1 system. Caldentey is not a sensational dribbler like Martens, but she is excellent at coming inside off the wing and finding pockets.

Below is one example of Caldentey’s movement, and how it helped Barcelona to play through Wolfsburg. Here, Harder is marking Kheira Hamraoui, while Ingrid Engen is close to Alexia Putellas. Ideally for the She-wolves, their other midfielder – Alexandra Popp – would cover behind Harder and Engen, but she doesn’t here. Consequently, Caldentey was free to come in, receive between the lines, turn, and progress the attack. 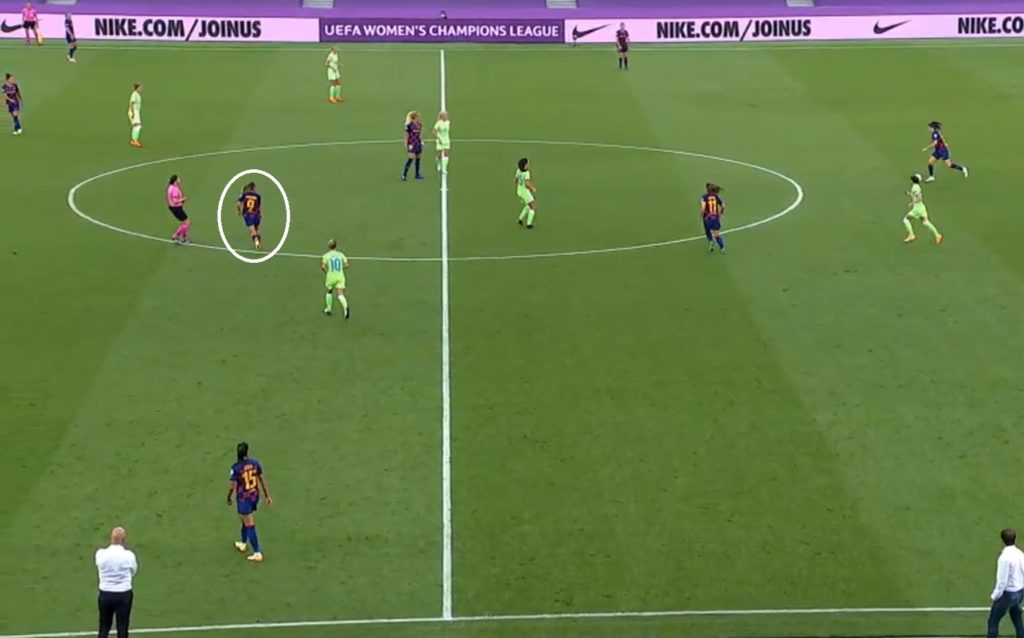 Wolfsburg generally did a decent job of containing Barcelona, but it’s difficult to constantly keep tabs on players like Caldentey. And she wasn’t the only one moving to find space – Jennifer Hermoso played her usual free role, moving laterally and vertically to create passing options for her teammates.

Below, as Wolfsburg’s left-back is drawn out to cover Caroline Graham Hansen, we see Hermoso running into the open channel to receive a ball over the top. From here she goes on to cut inside and feed a precise pass through for Hansen to run onto in behind. In general, Hermoso and Hansen combined well down the right and were Barca’s most threatening combination. 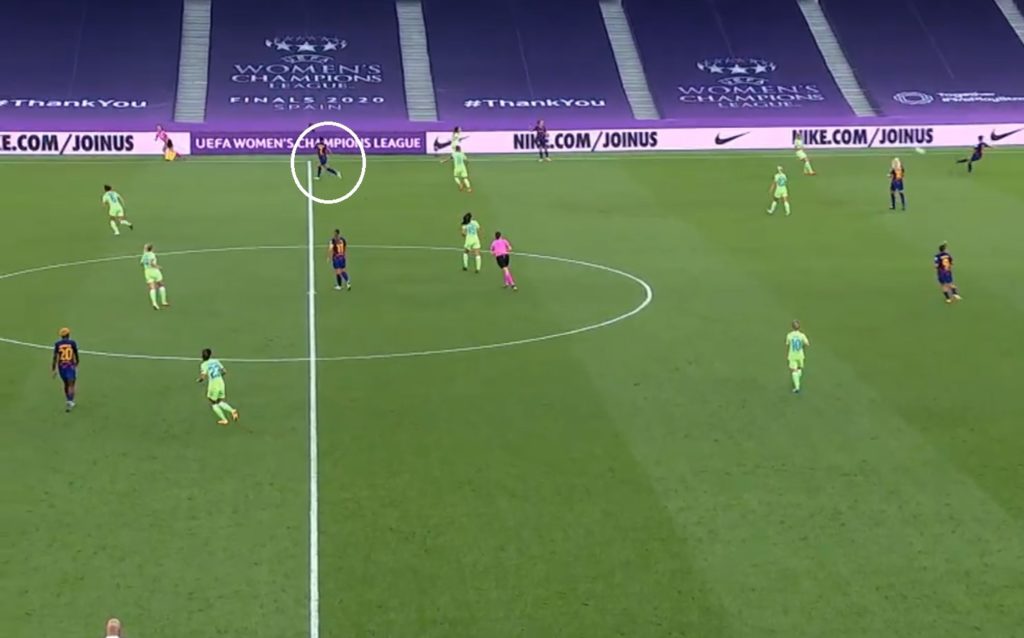 While Barcelona tried to play through midfield, Wolfsburg rarely got Popp or Engen on the ball facing play. Left-back Joelle Wedemeyer stayed deep in build-up to form a back three with Dominique Janssen and Kathrin Hendrich, but this slight wrinkle didn’t help them to play into midfield.

Barcelona put intense 1v1 pressure on all over the pitch. Hermoso and Asisat Oshoala pressed Wolfsburg’s center-backs, Hansen pressed Wedemeyer, Hamraoui pressed Popp, and so on. Wolfsburg either went direct under pressure, or went direct through choice, then looked to win the second balls. Sometimes this approach proved quite effective, as it led to physical duels that stronger players such as Popp could win.

Below is an example of this. Here the center-backs play direct to the frontline, finding Pajor. The striker is under intense 1v1 pressure from Andrea Pereira, but her strength allows her to shield the ball, wrestle her way around Pereira, and run onto the ball. From here, Wolfsburg get into a 3v2 situation that leads to Svenja Huth shooting just over. 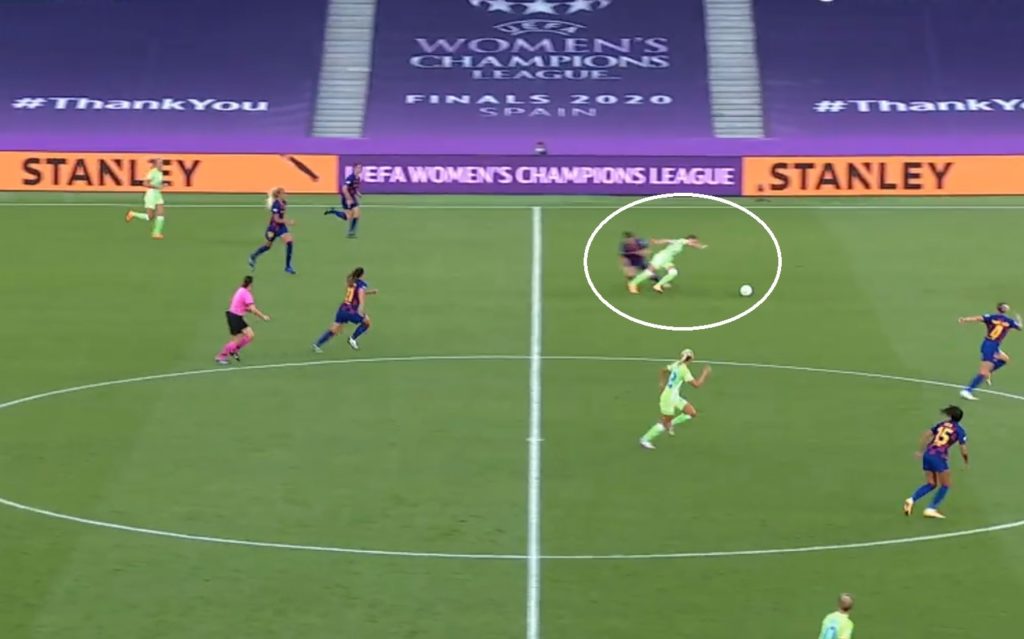 Despite a more direct, less controlled, possession game, Wolfsburg did show their quality on the ball once they got it down in Barcelona’s half. Huth and Fridolina Rolfo threatened with their speed on the dribble, Harder was able to find spaces to attack, and Pajor was excellent at leading the line and linking play.

Wolfsburg’s goal came from a wonderful attacking move that saw Pajor show for the ball from Wedemeyer, then lay off to Engen. Having built the attack down the left side, the Norwegian central midfielder spotted an overload on the right. Harder then made a brilliant run, dragging the Barca left back with her, to free up Huth to receive Engen’s switch of play. We see this play below. After this, Huth crossed in, Pajor’s fumbled overhead kick fell to Rolfo, and the ball was in the net. 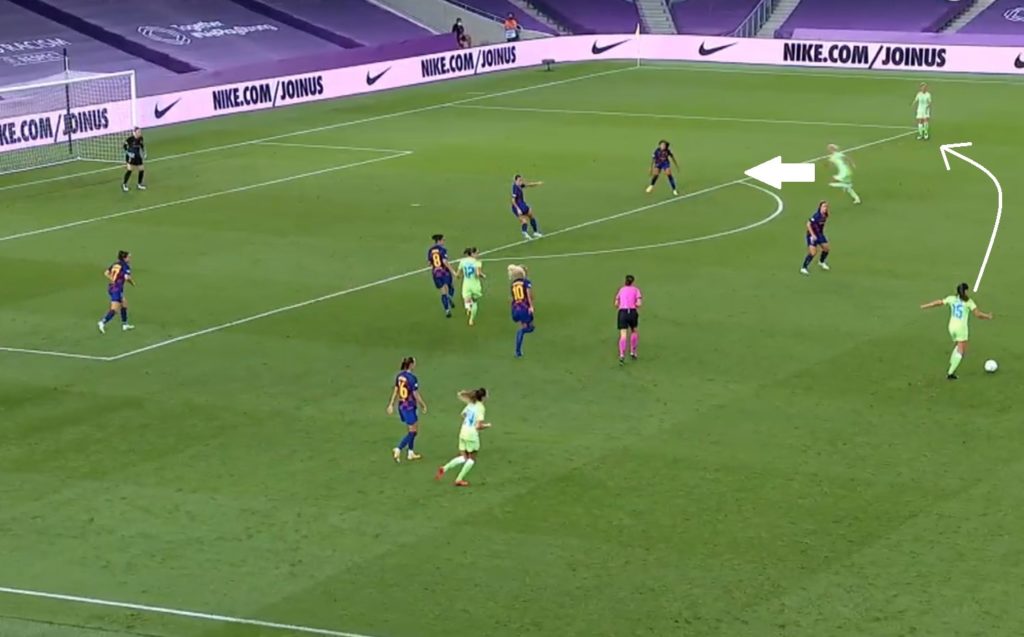 With the 1-0 lead, Wolfsburg modified their defensive approach to seal the win. They went from a 4-4-1-1 to a straight-up 4-4-2, with their front two of Pajor and Harder dropping deeper. Now Barcelona’s center-backs had even more possession, as they were only really put under pressure when they got near the halfway line, but they found it hard to exploit the extra time and space.

Below we see the slight shift in Wolfsburg’s defensive formation. In the first picture we see their initial shape of 4-4-1-1, with Harder circled behind Pajor, who is in pressing distance of Barcelona’s center-backs. Then, in the second picture, we see the 4-4-2 they dropped into after the goal. 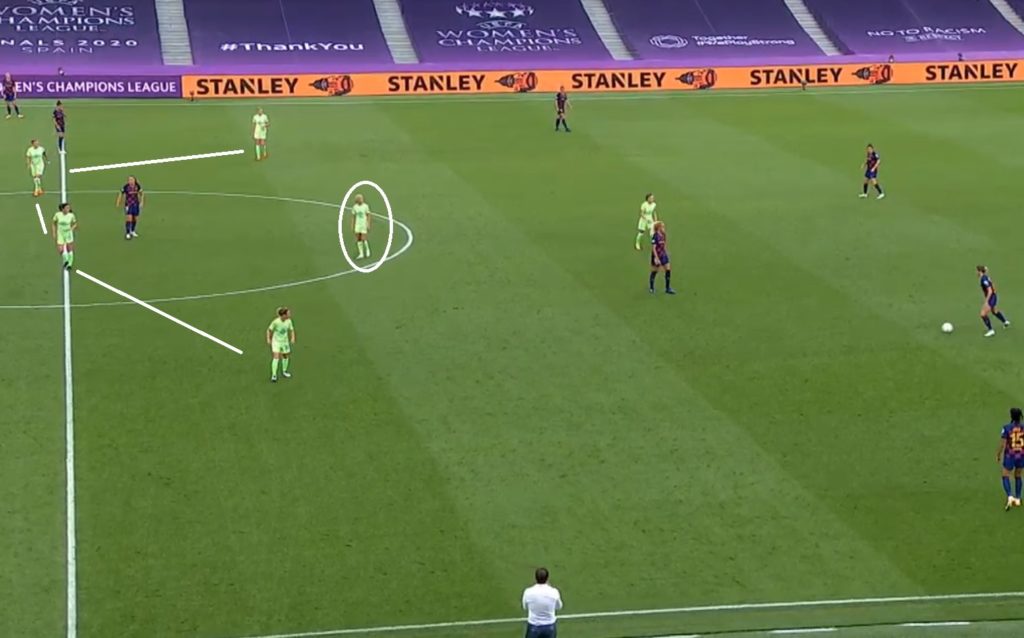 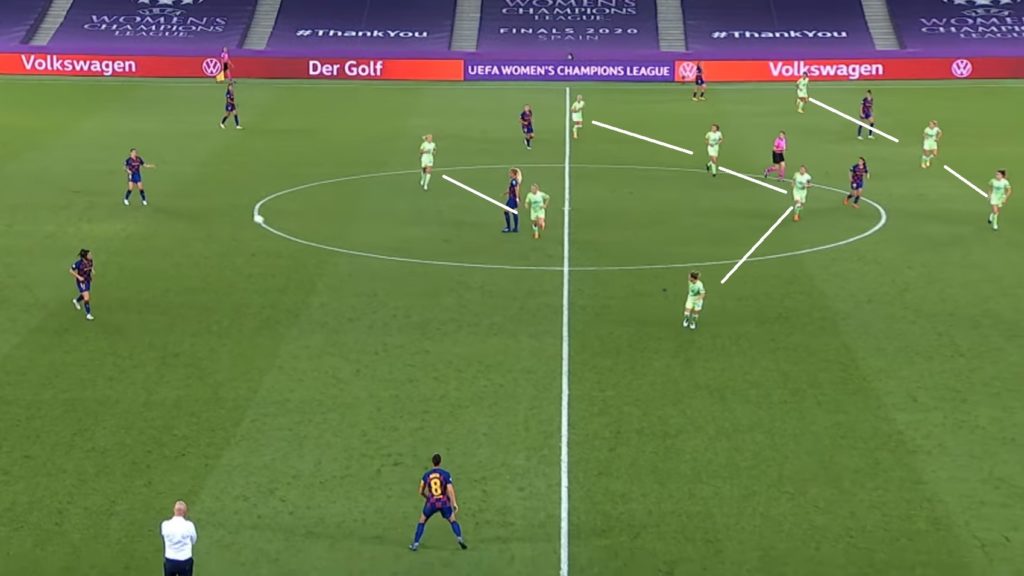 Wolfsburg were now resolutely committed to defending, keeping a compact shape and reducing the space between the lines for the likes of Caldentey and Hermoso. They focused on cutting out through balls before counter-attacking, using the pace of Huth and the fresh legs of Pauline Bremer when she came on for Pajor.

Barcelona continued to try and play short passes through midfield, break the lines and combine in the final third, but it wasn’t enough. And even when they did create chances, they lacked a clinical touch. Come the final whistle, they had enjoyed 61 per cent of possession, but had just one shot on target to show for it.

Talk of refereeing decisions or bad luck is off the mark. So too is the notion that, despite the presence of Oshoala and Hermoso, Barcelona lack a reliable finisher. The truth is their possession wasn’t enough on this occasion, and that Wolfsburg’s greater directness, physicality and versatility won them the game.

Kickin’ Back with Jess Fishlock