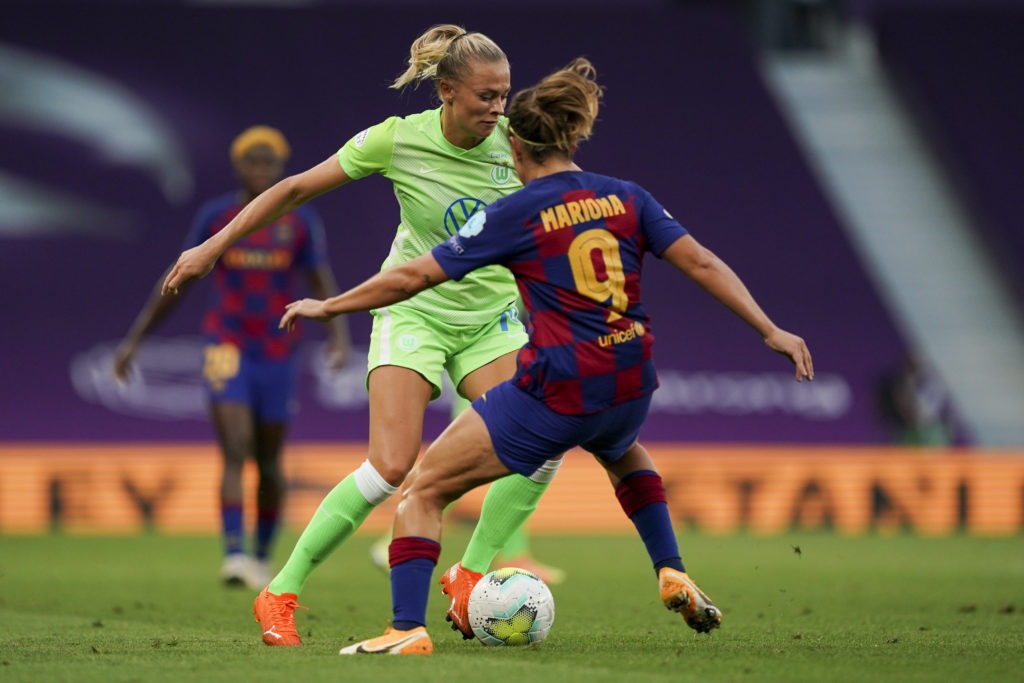 VfL Wolfsburg pulled off the 1-0 win over a persistent FC Barcelona in UEFA Women’s Champions League semifinal action Tuesday at Anoeta Stadium in San Sebastian, Spain. Wolsburg will find out their final opponent Wednesday when the all-French semifinal between PSG and Lyon is played.

In the 13th minute, Barcelona forward Asisat Oshoala headed a floated corner kick, and it appeared as if Wolfsburg defender Kathrin-Julia Hendrich got her arm on the header. Despite protests from Barcelona, no handball was called. VAR will only be made available for the Champions League final on Sunday.

Here was the possible handball in the 13th minute…what do you think? 👀#WOLBAR | #UWCL pic.twitter.com/K0eVv0Dy5l

Barcelona looked to have the edge after the break, but it was Wolfsburg that broke through. In the 58th minute, Svenja Huth delivered a driven cross into the penalty area that Barcelona could not clear. In the ensuing chaos, Ewa Pajor’s attempted bicycle kick fell to Fridolina Rolfö, who was able to poke in the rebound for the lead.

Barcelona had a number of dangerous opportunities to equalize in the last half-hour of the match, but all were squandered in front of goal. Their best chance came in the 65th minute, when Jennifer Hermoso dribbled along the end line and sent a low cross into Mariona Caldentey, who was waiting, unmarked in front of Wolfsburg’s goal. But, just six-yards out, Caldentey sent her shot over the bar.

OVER THE BAR! Barcelona's best chance at an equalizer.#WOLBAR | 1-0 | #UWCL pic.twitter.com/R8L1F4xdiq

Missed opportunities (and quite possibly a missed penalty call) cost Barcelona in this semifinal, and Wolfsburg are on to the Champions League final.