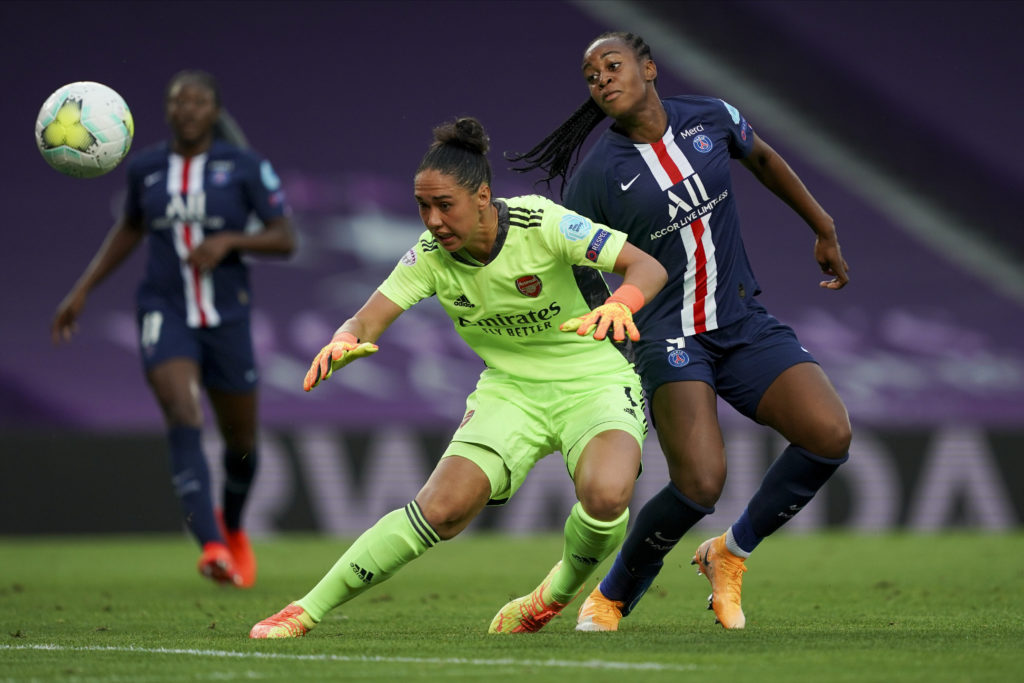 Following Wolfsburg and Barcelona, two more European clubs have punched their ticket to the UEFA Women’s Champions League semifinals. In Saturday’s quarterfinal action, Paris Saint-Germain scored a late winner to best Arsenal 2-1, while Lyon thwarted a late surge by FC Bayern to win their quarterfinal by the same scoreline.

Marie-Antoinette Katoto opened the scoring for Paris. Off of a corner kick, Katoto was able to lose her defender in the box, and finished a beautiful volley past Arsenal keeper Manuela Zinsberger.

But shortly before the half, Bethany Mead pulled one back for the English side. Arsenal captain Kim Little was able to slip a ball through PSG’s defenders to Mead in the box, who turned, found space, and bent her shot past PSG keeper Christiane Endler.

PSG players weren’t happy with the awarded goal, as it appears Mead may have been a touch offside when she received the pass from Little. Unfortunately, UEFA will only have video review available for the Women’s Champions League final match, therefore no VAR review took place.

With both teams pushing for a winner for much of the second half, it was PSG that went ahead late through substitute Signe Bruun. In the 77th minute, PSG’s Kadidiatou Diani stripped Arsenal forward Katie McCabe of the ball near the touchline. Diani passed to Katoto, who delivered a low cross that Brunn was able to finish.

Lyon were pushed on Saturday but managed to eek out a 2-1 victory over Bayern Munich to keep hope alive for a fifth consecutive win in the UEFA Women’s Champions League. Nikita Parris and Amel Majri scored for the holders and Carolin Simon for the German side.

Bayern appeared to be every bit the equal to Lyon during the opening half but found themselves 1-0 down in the halftime locker room. Parris ran onto a ball served near the top of the box by Delphine Cascarino. As she headed it toward goal she was run over by a late-arriving Bayern keeper, Laura Benkarth. Parris shooed away her teammates trying to celebrate with her as she lay in pain but was eventually able to get to her feet and continue. Benkarth was shown a yellow card.

GOAL, @OLfeminin! Nikita Parris scores with her head and then collides with Bayern goalkeeper Laura Benkarth. She's up and OK, though, continuing the game.#OLFCB | 1-0 | #UWCL pic.twitter.com/GN1XuVVNME

Majri doubled the lead on a splendid free kick from just above the 18 that Benkarth got just enough of to push it into the side netting. The free kick was set up by a surreal Dszenifer Marozsan touch in midfield that put Cascarino in a dangerous spot where she was fouled before entering the box.

But just when it seemed like Lyon had put the one-off quarterfinal out of reach, Bayern snuck one back on a free kick of their own. Simon did not have the best angle toward goal but her low, driving kick managed to slip underneath Sarah Bouhaddi, possibly with a deflection off second half sub Sara Bjork Gunnarsdottir. Simon was credited with the goal.

Bayern were the more aggressive, precise side as they pushed for an equalizer that would have taken the match to penalties, but they were unable to find one. With about 12 minutes to play, Sydney Lohmann sent in a shot that missed high but skimmed off the crossbar on the way through. That is as close as Bayern would come despite keeping the pressure up in the closing minutes.

Quarterfinal wins for both Lyon and Paris Saint-Germain mean the familiar French rivals will meet in Wednesday’s semifinal.

Led by Harder, Wolfsburg firepower too much for Glasgow City
Lyon advance but Bayern expose vulnerabilities