A personal thank you

“A house fell on our house.” That’s what my wife said to me from the passenger’s seat of the car as we were driving home. She just listened to a voicemail from our neighbor, but the full message cut out as we lost service in our mountainous, rural area. She was upset.

“A tree, you mean?” I asked, but I already knew the answer. My wife was, at that point, 39 weeks pregnant and we had another doctor’s appointment for her and our first child. We knew Tropical Storm Isaias was coming but we also had an important appointment, and the forecasts predicted that the worst of it would stay just to the south. As I type this a week later, tens of thousands in Connecticut remain without power. My aunt, who is an insurance agent, said she hasn’t seen such a flood of claims from one storm in 30 years in the business, including Superstorm Sandy. I was here for that, too, and that was awful.

So, as we slowly drove home in a line of unusual traffic for our country road, past down wires and trees – including one which split a car in half in the middle of the road – we braced for whatever we were about to see. The tree which sits about 5 feet from the window next to our bed came down in the storm, and was laying across our roof, hanging over the edge on each side. It was about 60 feet in length.

Somehow, it did not come through the house. It split near the trunk and, apparently, fell slowly enough to rest on the roof rather than crash through it. This tree stayed fixed on our roof by a thick metal pipe which held our electrical wires, and a cable wire which somehow did not snap. 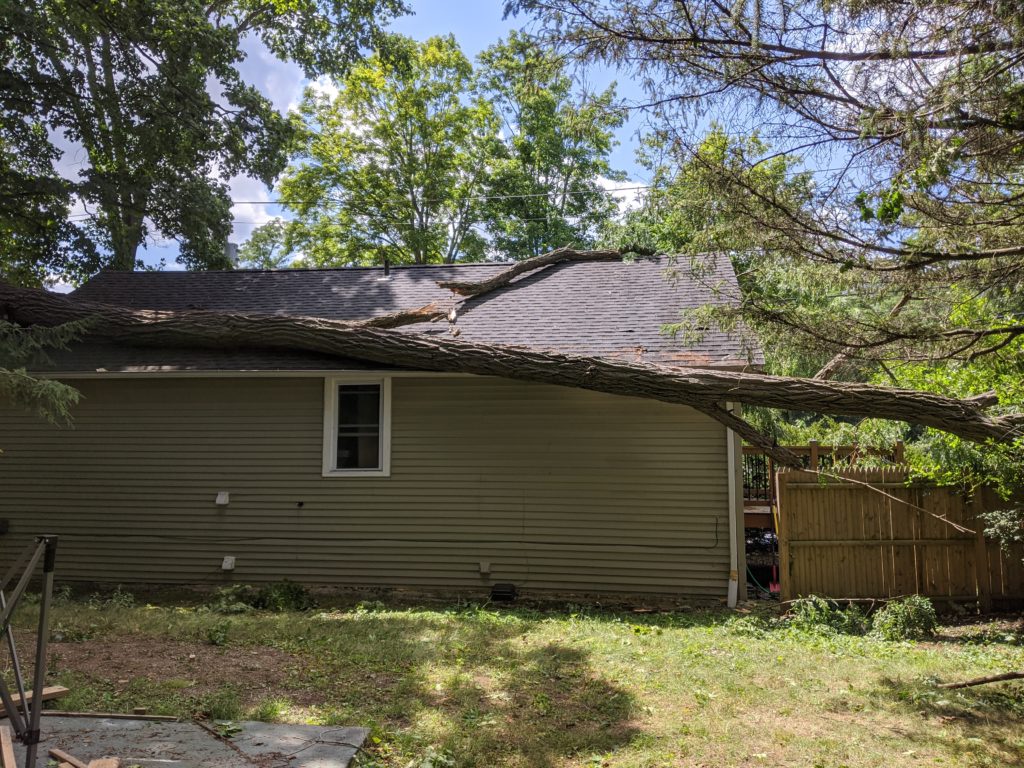 That back wall it was resting across is all our living space. Our bed is up against the wall on one side and our couch is against that same wall on the other end of the house. Nobody was home, and nobody was hurt (our already anxious dog was home and had what I imagine was the scare of his short life from the sound of the impact). I know that things could have been much worse, and I know that others were not so lucky.

In the week since, my wife and I have been overwhelmed by the show of support from family and friends. The online soccer community which I am part of came together and raised funds to help us cover our out-of-pocket expenses for the damages. Above all, the kindness of the very gesture from so many colleagues was so uplifting in a challenging time. Thank you, thank you, thank you. I have thanked everyone individually and I don’t honestly know if they wish to have their names out there or not, so I want to at least publicly acknowledge what they did and why it was so special.

This industry can be rough and ugly at times. Social media often compounds that with toxic negativity that can feel hard to escape in the moment. Personally, I slugged through the NWSL Challenge Cup this summer. The combination of months of quarantine, some various media access issues, and a long underlying frustration with wanting our platform to be larger, all boiled over for me. That’s the more direct way of saying what I said the other week – that The Equalizer needs your help to grow. All that, along with some retrospectively materialistic wants personally, caused frustration.

None of that seems to matter now. People matter. Community matters. Sometimes we need reminders of that, and it needs to happen in more extreme ways. It shouldn’t take a tree falling on our house to be reminded of that, but I keep reiterating to my wife and our family that the house is still standing and, even if it weren’t, we are still here, unharmed. I am reminding myself of that just as much.

The roof will need to be replaced. I’m more attentive now to praying for the literal roof over our heads. The tree has been removed and today it got cut up and taken away. Late Saturday, the power kicked back on after five days of darkness. It could have been worse. Dozens of power trucks – many called in from across the country – continue to drive back and forth past our house all day here as those up the mountain wait for power, one week later.

We are still waiting anxiously for our new addition to arrive. I already knew that would personally see me step away from my usual level of output and involvement for the coming weeks, and after this past week, I’ll admit that the content I and we had planned is a little delayed at the moment for obvious reasons. I said the other week that I want to be more transparent with our readers. This is me doing that on a far more personal level than I thought I might need to when I wrote that.

I have already said that we don’t know when the NWSL or United States women will play again, but that we’ll be here no matter what to bring compelling content to our subscribers. Today, I just want to say that I’m happy to be here. I’m thankful my wife was not sitting on the couch last Tuesday as the storm rolled through, as she probably would have been if we weren’t out at that appointment. I’m grateful the tree didn’t completely open up the roof to the point that we can’t bring our baby back to some version of our home, even if it has taken a beating. I realize so many people had it far worse. We are blessed to have everyone’s support. For those who have reached out and helped us in words and with finances: thank you.