Q+A with Allie Long: Hosting a show, her online platform, and what’s next 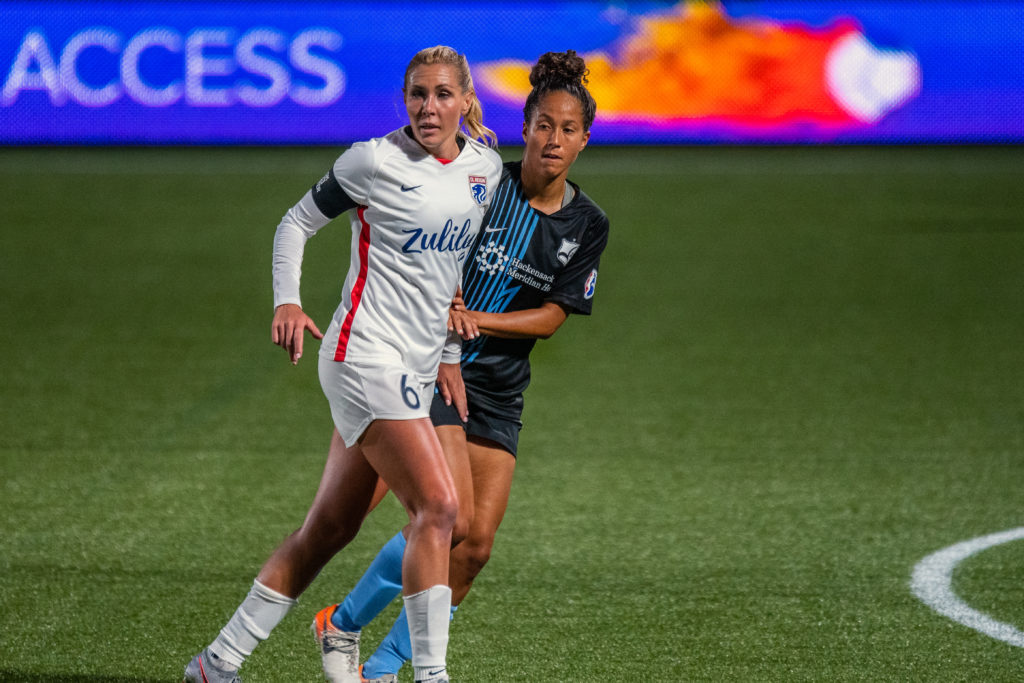 OL Reign midfielder Allie Long is a National Women’s Soccer League veteran with over 50 caps for the United States. She is also a student of the game and, increasingly, active online in every way from social media to gaming.

Long is the co-host of the new digital show called, “The Conference Call,” alongside Utah Royals midfielder Vero Boquete, which is produced in both Spanish and English by La Liga North America and the International Champions Cup. Long spoke with The Equalizer about using her online platform, what she wants to get out of hosting that show, and what’s next for her on the field.

You are hosting a show! What got you into this?

I absolutely love La Liga. I’ve been probably the biggest fan of [Barcelona] since Pep [Guardiola] took over their team in 2008. I just love the way they play. They reinvented the game, the way I saw it. So, I’ve just been a fan of them. I’m obviously a Barca fan — always watching them, always learning from them. And it’s just a team and a league that I kind of, when I talk about when I’m trying to get better, I feel like watching is such a big part of that, and I just really watch La Liga. As soon as they approached me about it, it was a no-brainer. And I think, as a female, to be asked to do that — to bring La Liga to the U.S. — I was all about it. I am just really pumped for it to start.

There’s a running joke about who in the NWSL is the Most Online Player. I think of you and Yuki Nagasato as doing some of the most creative stuff. Do you think about that platform that you have and how you want to use it?

Yeah, I think initially, when they asked me, I was really excited. And then I thought about it and I was really hoping that I wasn’t having to follow their story or what they wanted me to say, and they are pretty much giving me free rein to be me and to talk about what I think is important — to kind of express my side of it and bring my touch to the entire show. So, I feel like that’s just even cooler, because you don’t see that a lot. Usually a company comes in and they want you to do it their way — and I’m definitely going to obviously respect that — but I’m just really excited that I can kind of be me in this whole process and add my side to it and my passion for the game, and things that I see that are really important for girls to see — and obviously guys too, but especially girls in the United States.

Twitch asked me to get a Twitch handle ever since the World Cup ended and I went to a Call of Duty appearance. I never really considered it. And then as soon as Twitch was a partner with the NWSL, I was like, let’s do it. One hundred percent; I’m in. I’m going to bridge the gap between gaming and football. That was kind of what got me to do it finally, because it’s been on the table for a really long time.

I’ve always found that you are willing to go deeper with your answers to media, talking about tactics for example. Is that where you see the show going?

Yeah, I think that for the show itself, the main purpose that I want is just kind of to share football stories that people would be interested in and then also just bring La Liga and soccer and talk about the league — just give that more exposure to the United States. Teaming up with Vero is going to be really fun. I’ve known her for a long time. She’ll do the Spanish part, even though I know I’m going to try to speak Spanish even though I can’t that well. But yeah, I just think that talking about tactics, talking about different players, I think that in the future I’ll get an interview with [Sergio] Busquets soon, so that will be the highlight of the entire thing. I don’t even know what I’m going to ask during that, but I have so many questions I feel like.

I’m the technical director for the Barcelona Academy New York. It was just really cool. I feel such a big passion — especially on Long Island, where I came from, where I grew up playing — I feel like I want females to be inspired. I want to bring that soccer to Long Island. From the drills to how they go about things, it’s just so different from what I’ve ever experienced. So, although I was the technical director, I was sitting there taking notes, learning. I still ask questions. I went in there thinking I could really add value and actually they have been giving me value the entire time, just teaching me. It’s been so eye-opening to see the way they go about things and the way they do it at La Masia. It’s been a really cool thing to be a part of.

There’s an interesting trend of active athletes interviewing other athletes, and you are joining that movement. Why do you think there has been more of that? Is it a response to athletes feeling like their stories aren’t told well?

I think it’s a mix of a couple things. I think right now everything is going through social media because of the quarantine, and all eyes are on the internet. I saw that in a huge way, just how Twitch and streaming and Facebook Gaming took over. I came onto the scene and it opened my eyes to a whole different world. So, I think the fact that social media right now is the way that messages are getting through — you can’t really have an ESPN crew go to somebody’s house right now — so I think everything is going through Zoom and social media.

Then, also, I think there’s a comfort level when a player is talking to another player. And I think that kind of opens up to a more authentic — not more, but a lot of times an authentic interview that I think players know what the player goes through and is going through, and kind of knows what they would like to be asked and what they don’t like to be asked, might help the overall interview itself.

On the field, what’s next for you? A lot remains unknown about the rest of 2020 for the NWSL. Are you looking to just get games, get back to training?

When we lost [in the NWSL Challenge Cup quarterfinals], I was like, ‘wow, I just trained for so long to play two and a half games.’ I played half [against] Portland; they rested me for the other one hoping that we would win. I feel like we just came up short. So, yes, I want games. I am looking a little bit overseas, but also I know that it is difficult — after playing for PSG [2011-12], I know that when you go overseas, they don’t like to do short-term deals. And I believe that the NWSL, especially heading into an Olympic year, I think the NWSL is the most competitive league in the world. I love Farid [Benstiti, OL Reign coach]; I don’t want to miss time with them. So, it’s a hard balance to try to find.

But then also, the partnership with Lyon, I can always go over there and train with the team. So, for me, being able to train day in and day out with a club like Lyon is definitely better than more time by myself or only [training] in twos, depending on what state law is allowed. So, I have a couple options, and even maybe potentially even signing just to actually get games, because that’s what I really want. Just staying focused on making the Olympic roster — that’s obviously my main goal — and whatever I have to do. I think that’s playing, getting games, and training in the best environment.

Speaking of playing games: There has been talk of people who want an NWSL cup competition every year. We’ve heard about ICC wanting to expand for a while, and FIFA keeps talking up a Club World Cup for women but we haven’t seen much on that yet. What do you want to see with those types of competitions?

And also, just to see where we compare with each other. I think this league is the most competitive, but I don’t think it’s the actual best football league. I think that you’re going to see Lyon, Wolfsburg and Barcelona, they play real football. And I think we are so competitive, we’re so athletic that we’ll give them a game any time, but I’m just curious to see the difference [in] level. I think that our league, day in and day out, the bottom teams would be in the top league, but I think the top other teams in different leagues, on a footballing level, they are advanced.

You just spoke to the on the field, but how about off the field for the NWSL? Are you happy with where things are and where they are going?

Yeah, I feel like I just retweeted a tweet that I think you tweeted in the first place, just to see the social media value. I’ve never seen those numbers. I think that the fact that we put on a tournament first — everyone was so scared about the safety protocols — and I really think a lot of people doubted. I really wanted to play the tournament. I was trying to get everyone on board and at the same time hoping that nobody got sick, so I’m really happy. And I think that the way that we handled it and how the league handled it was great. Just seeing the sponsorship step up, I think it is a great time to invest in women’s football. I can’t see this going down; I can only see it going up. I’m just really excited to see, especially with LA coming in and Louisville, I’m just so excited for the future. I think it’s a great time. We all have seen the value and to see actually other companies finally coming on board, it’s just unbelievable. It’s great.